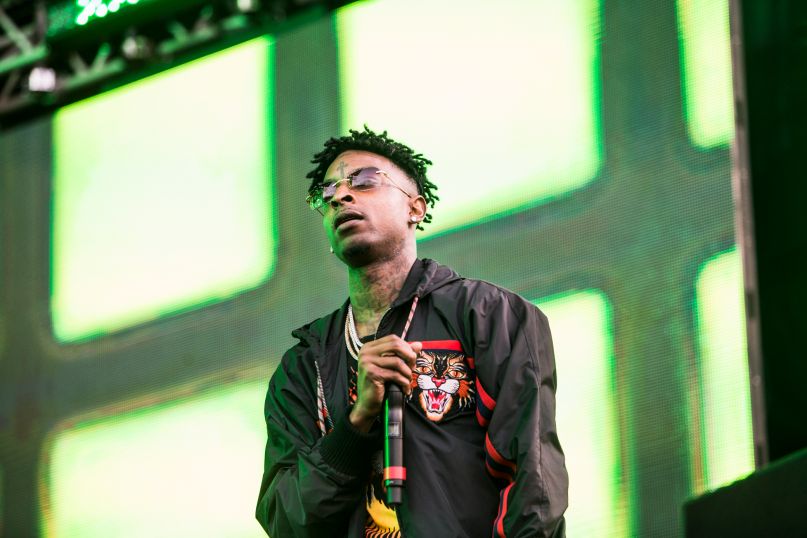 After nearly two weeks in custody, 21 Savage has been released on bond pending a deportation hearing, according to TMZ.

The 26-year-old rapper (born Sha Yaa Bin Abraham-Joseph) was arrested Sunday (February 3rd) by US Immigration and Customs Enforcement (ICE). In a subsequent statement, an ICE spokesperson alleged 21 Savage to be a “United Kingdom national” who “initially entered the US legally in July 2005, but subsequently failed to depart under the terms of his nonimmigrant visa.”

21 Savage’s attorneys argued that he lost his legal status in 2006 “through no fault of his own” and applied for a visa in 2017 once he learned he was in the country illegally. They also questioned the legality of his detainment, arguing that he was not subject to mandatory detention under federal law and was entitled to bond. A judge clearly agreed with 21 Savage’s lawyers, as he was granted bond on Tuesday.

In a statement, the rapper’s attorneys said,

“For the past 9 long days, we, on behalf of She’yaa Bin Abraham-Joseph, known to the world as 21 Savage, have been speaking with ICE to both clarify his actual legal standing, his eligibility for bond, and provide evidence of his extraordinary contributions to his community and society.

In the last 24 hours, in the wake of the Grammy Awards at which he was scheduled to attend and perform, we received notice that She’yaa was granted an expedited hearing.

Today, 21 Savage was granted a release on bond. He won his freedom.

21 Savage asked us to send a special message to his fans and supporters—he says that while he wasn’t present at the Grammy Awards, he was there in spirit and is grateful for the support from around the world and is more than ever, ready to be with his loved ones and continue making music that brings people together.

He will not forget this ordeal or any of the other fathers, sons, family members, and faceless people, he was locked up with or that remain unjustly incarcerated across the country. And he asks for your hearts and minds to be with them.”

According to his attorneys, 21 Savage was born in Newham, a borough of London. He immigrated to the United States with his family when he was seven years old. He briefly returned to the UK in 2005, but returned to the US after just a month. 21 Savage’s attorneys also point out that he has “three U.S. Citizen children, a lawful permanent resident mother and four siblings that are either US Citizens or lawful permanent residents,” adding, “He has exceptionally strong ties in the United States, having lived here since he was in the first grade. Because of his length of residence in the United States and his immediate relatives, Mr. Abraham-Joseph is eligible to seek Cancellation of Removal from an Immigration Judge.”

21 Savage is being represented by immigration attornies Charles Kuck, Dina Laporte, and Alex Spiro, who was hired by JAY-Z. HOV is far from the only artist in 21 Savage’s corner, however; the likes of Kendrick Lamar, SZA, J. Cole, T.I., and others are featured in a new video from Mic calling for 21 Savage’s release. They also highlight other stories of undocumented immigrants who have been either detained or deported by ICE and other government agencies while going about their everyday lives.

. @KendrickLamar, @SZA, @DJKhaled, @JColeNC, and others share the #21Ways undocumented people can face deportation in America, in solidarity with 21 Savage and others detained by ICE https://t.co/tB8D9GQ2ed pic.twitter.com/SD7xryYjuK