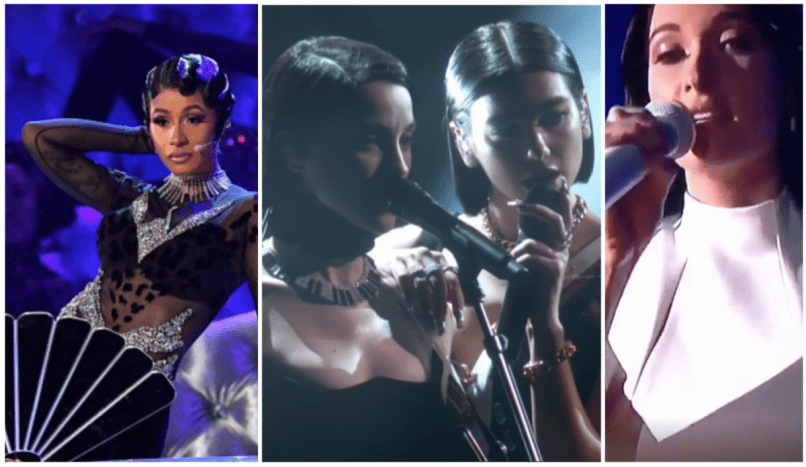 Cardi B, Dua Lipa and St. Vincent, Kacey Musgraves at the 2019 Grammys

The future is female and paved in Grammys. Following a year in which just 17 of the 86 awards were won by women or female-led bands, and Recording Academy president Neil Portnow embarrassingly prompted women to “step up”, the Grammys rebounded big time in 2019

As The Hollywood Reporter points out, 31 women won awards during the 61st annual ceremony on Sunday, an increase of over 82% from 2018. The telecast began with Lady Gaga winning Best Pop Duo/Group Performance for “Shallow” and ended with Kacey Musgraves’ fourth and final award for Golden Hour in which she took home the highly coveted Album of the Year trophy.

Another one of last night’s wins was downright historic for the Grammys as Cardi B became the first woman to win Best Rap Album with her unstoppable, blockbuster debut, Invasion of Privacy.

“I think that women have a really necessary perspective to art, to music and it’s really nice to see that getting a chance to be included,” Musgraves told reporters backstage. “I think it takes two to tango and I think it takes women having the balls to put out art that might not always be liked by everyone, but it also takes people on the other side of that to reach out and give those things a chance to be heard or seen.”

Or, as Dua Lipa pointedly declared in her acceptance speech for Best New Artist: “I guess this year we really stepped up.” No kidding.

For even more perspective on the changes, take a look at the complete list of winners and revisit all of our coverage from last night, which included tributes to luminaries such as Dolly Parton and Diana Ross.