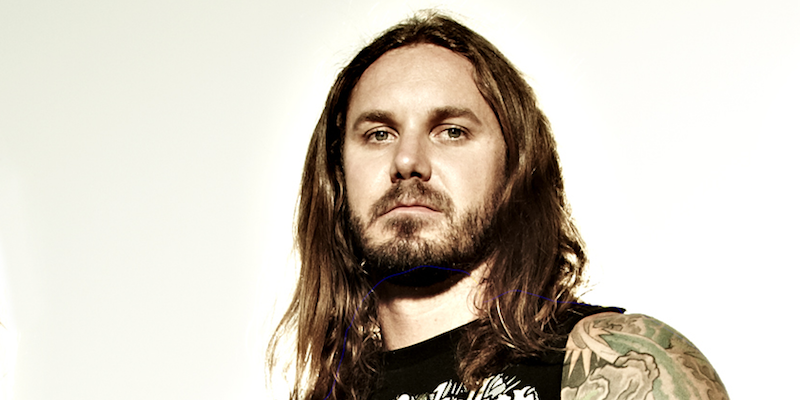 As I Lay Dying's Tim Lambesis, courtesy of Metal Blade

As I Lay Dying singer Tim Lambesis and his current wife, Amanda, have unveiled details of their wedding in a pair of Valentine’s Day posts on Instagram, revealing they actually got married in 2015 while Lambesis was still in prison.

Lambesis pleaded guilty in 2014 to attempting to hire a hitman to murder his estranged wife, Meggan, and served two and a half years of a six-year sentence in a California prison before being released in late 2016.

While it was known that Lambesis had since remarried, he and his new wife never publicly opened up about the details until today’s Instagram posts.

In his post, Lambesis explained that Amanda had stood by him during the darkest times of his trial and imprisonment. “She hated seeing what I became, but she was still able to see that the man she loved wasn’t lost forever. I reached out my drowning hand, and she helped pull me ashore. Amanda drove hours to see me in chains behind thick glass for only 30 minutes.”

Amanda wrote of the wedding, “It was truly a fairly tale …Tim and I were married May 2nd of 2015 at CDCR prison. We said ‘I do’ in front of our parents, a file cabinet and a few inmates. There was no DJ or cake, no honey moon or bridal party. 3 photos in total and I got a 3 second kiss that was watched by a guard. That day was the best day of my life so far and so damn rock and roll.”

Lambesis and his bandmates re-formed As I Lay Dying last year, releasing a single and embarking on tours of the United States and Europe. Their reunion has been met with a mixed reaction, as many have vowed not to support Lambesis because of his criminal past.

In fact, just recently, a venue in Memphis, Tennessee, canceled the metalcore band’s April 5th concert on their upcoming US tour because of public outcry. Lambesis responded with a lengthy statement in which he said he respected the venue’s decision but also detailed the ways he has turned his life around. As I Lay Dying will still embark on the trek beginning March 15th in St. Louis.

Both Lambesis and Amanda went into greater detail about their relationship and their wedding. See their full Instagram posts, along with photos of both the prison vows and a wedding celebration that took place a year later, below: