Bronx-born was born to flex, with diamonds on her neck and a plush outfit 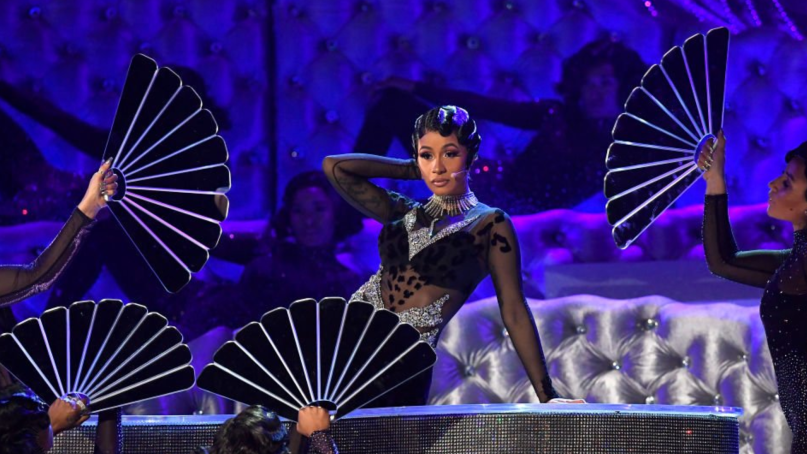 Cardi B at the Grammys

Kendrick Lamar, Drake, and Childish Gambino all opted out of the 2019 Grammys, but hip-hop was still represented loudly and proudly by the one and only Cardi B. The Bronx-born rapper brought the party to the stage by performing an especially extravagant rendition of smash single “Money”.

Cardi’s stage featured a glitter-covered piano and a background made up of lovely fabrics draped in rich purple, pink, and silver hues. As for the MC herself, she truly was born to flex with diamonds on her neck, leopard tights, and toward the end, a feather accessory that made her look like the most fabulous peacock to take on the Grammys.

Replay it all down below.

Watch: Cardi B Just shut down the #Grammys

Cardi was up for a total of five Grammy awards this evening — Album of the Year (Invasion of Privacy), Record of the Year (“I Like It”), Best Pop Duo/Group Performance (“Girl Like You” with Maroon 5), Best Rap Performance (“Be Careful”), and Best Rap Album (Invasion of Privacy). In the end, the MC snagged just the Best Rap Album award, but it was a momentous accomplishment all the same as Cardi became the first woman to win as a solo artist in that category.

The Barack Obama-approved MC is due to release a follow-up album sometime in 2019.

Pick up some of Cardi’s releases on vinyl over on ReverbLP.