Cardi B thanks Tom Petty, who died in 2017, for congratulatory Grammys flowers 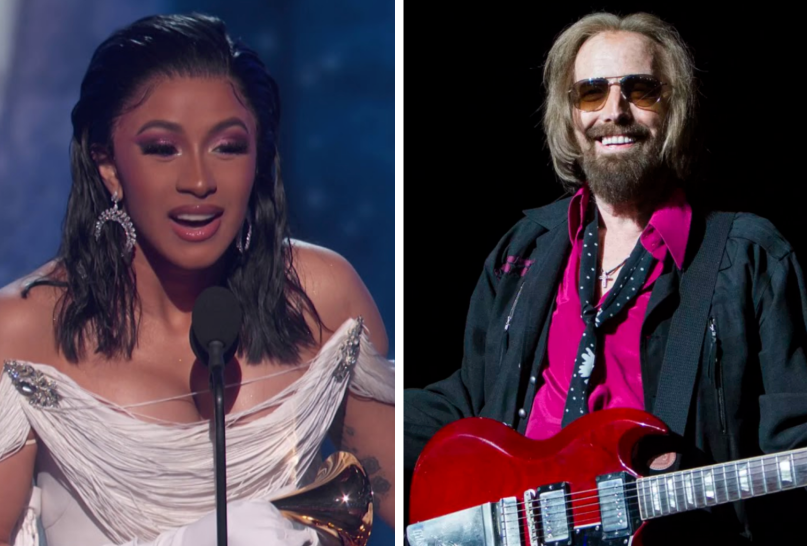 Cardi B made history this past Sunday at the 2019 Grammys. Her smash debut, Invasion of Privacy, was awarded Best Rap Album, cementing Cardi as the first woman to win as a solo artist in that category.

The Bronx-bred rapper thanked a number of people for helping her get to the top, even giving a shout-out to the late Mac Miller, saying, “I’m sharing this Grammy with you.” Later on backstage, she also thanked… Tom Petty for gifting her a congratulatory bouquet. Yes, Cardi thought the rock legend, who passed away in 2017, had sent her flowers.

“Thank you Tom Petty for the flowers,” Cardi said in an Instagram video, as pointed out by SPIN. “I left the room but, um, and the flowers were very big. I want to say thank you so much and this is such a beautiful note. Motherfuckers love me, bro.”

The note in question read, “You’ve got a heart so big it could crush this town,” which is a lyric pulled from Petty’s 1996 song “Walls (Circus)”. However, it seems Cardi actually believed Petty wrote the note and sent the flowers himself.

Oh, Cardi. We’ll chalk up the innocent mistake to all the chaos of Grammys night, but might we suggest brushing up on Petty’s discography? He’s pretty good, we hear.

And to the real Cardi fan or Grammy staffer who gifted her that bouquet — nice song pick.

This is likely the last Insta-story we’ll see from Cardi B for awhile. The rapper shut down her Instagram account on Monday following a profanity-laden rant directed at those questioning her big Grammy win. “I remember last year when I didn’t win for ‘Bodak Yellow’ and everybody was like, ‘Cardi got snubbed,’” she said. “Now this year’s a f— problem?! My album went two-time platinum, my n—, and every chart that there was, my album was always Top 10. Number one album, as well.”

She also threw subtle shade at BET over a recent tweet that took a shot at Nicki Minaj. After Cardi won her Best Rap Album grammy, BET tweeted, “Meanwhile, Nicki Minaj is being dragged by her lacefront.” This caused the Queen MC to pull out of her scheduled appearance at the BET Experience Concert set for this summer. In her social rant, Cardi said, “It’s not my style for people to put other people down to uplift somebody else. That’s not my style and that’s not what I’m with,” she began, adding, “I don’t support that.”

See what could be Cardi’s final Instagram Live video below.

Cardi B reveals that she does not support BET’s aim at Nicki Minaj and defends herself from haters discrediting her #GRAMMYs win. pic.twitter.com/ZA1nKoiuUO

Then revisit songs from Cardi and Petty, because it’s 2019 and we have very wide-ranging playlists these days.