Embracing the "pop" in "power pop" on their Guppy follow-up 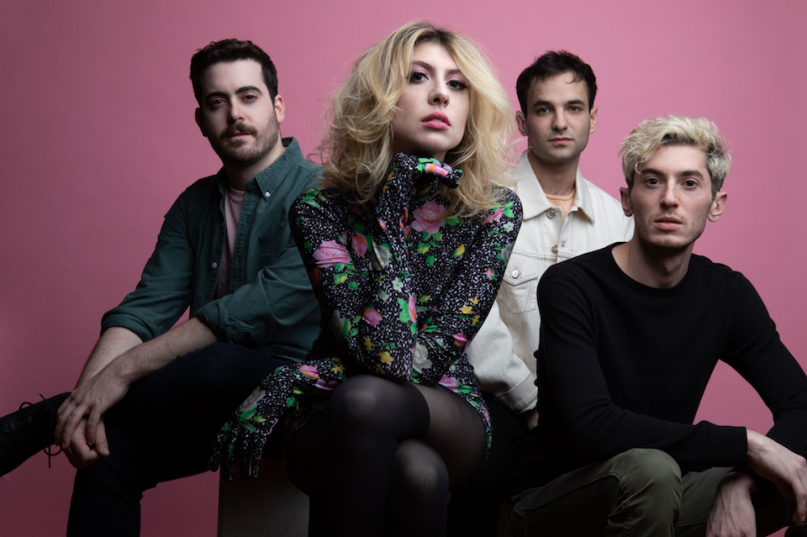 Charly Bliss have announced their sophomore album, Young Enough. The follow-up to 2017’s much-loved Guppy is due out May 10th on Barsuk Records.

The new record unapologetically embraces the first half of the pop punk designator the Brooklyn band earned on their debut. With help from producer Joe Chiccarelli (The Shins, The White Stripes), Charly Bliss crafted an album that’s “a celebration of extreme, expedited growth.” Frontwoman Eva Hendricks found inspiration in her excision of an abusive relationship to create songs meant to encourage listeners to “feel strong… Like you’re working through some shit but you feel really strong and beautiful, even if you’re in a lot of pain. That’s what I want people to feel. The opposite of broken.”

As a first listen to this new drive and sound, the band has shared lead single “Capacity”. There’s definitely still a familiar Blissfulness in the Hendricks’ hooky vocal melody, but the buzzing and dancing synths signal the poppier intentions of Young Enough. The lyrics form an “anti-people pleaser anthem” in which Hendricks realizes you can become so full of other people’s BS that you lose the capacity to be yourself: “I used to think one man could fill me up/ But now I know that if I’m always stuck obsessed with somebody else/ Distracting myself from looking at myself.”

“Capacity” comes via a video directed by Michelle Zauner of Japanese Breakfast, who takes Charly Bliss through the messy aftermath of a robbery. As Zauner explained in a press release,

“It was such a blast getting to work with Charly Bliss. Charly Bliss has always made great narrative music videos, so I wanted to stay in line with that tradition and take advantage of working with a band that are all such great, funny actors individually. I was watching a lot of heist movies at the time, and I thought a sort of post-heist fall out between friends was the perfect setting for this song about reaching your limit with someone. Eva had an amazing mood board she brought to the table with references to Paris, Texas, Five Easy Pieces and Badlands, so it was important for us to showcase a warm, ’70s color palette. Per usual, I worked with Adam Kolodny as our DP and my creative collaborator.”

Young Enough pre-orders are going on now; you can also pick up some Charly Bliss vinyl and more at ReverbLP. Find the album art and tracklist below.

Charly Bliss have also announced a small run of tour dates, including an East Coast leg for late February/early March and a European stretch in May. Their itinerary is below.