Classic Film Review: The Passion of the Christ Still Preaches to the Converted 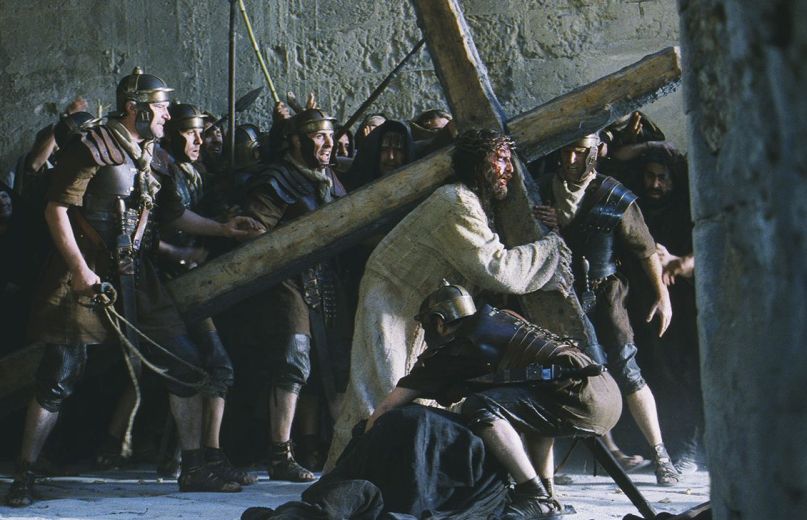 Love it or hate it, it’s hard to deny The Passion of the Christ‘s impact on the cultural landscape when it was released in 2004. Mel Gibson‘s religious epic about the last twelve hours in the life of Jesus Christ was a box office smash, earning $612 million in worldwide grosses and bagging three Oscar nominations. More than that, it proved that there was an audience for faith-based films on the big screen, a lucrative group previously relegated to direct-to-VHS evangelical schlock.  It’s from this wellspring that Pure Flix and other faith-based production companies have sprouted like the Tree of Life, offering up cinematically questionable fare like God’s Not Dead and The Shack.

While the artistic merits of those films are debatable, to say the least, The Passion of the Christ was big and handsomely presented, the work of a well-regarded filmmaker offering a splashy, prestige drama-caliber expression of Christian faith. It’s a film both curiously adherent to a particular kind of Christian realism (all the dialogue is in Latin and Aramaic, with Jesus only referred to as Yeshua) and almost pornographically violent — aesthetics that Gibson clearly values. Given the benefit of hindsight, Passion remains a deeply frustrating film, one clearly borne of incredible, admirable conviction and craft but tainted by the foibles of its auteur and its own misguided approach.

In many ways, The Passion of the Christ is an action film, and a bloody one at that. Gibson cut his teeth on Mad Max and Lethal Weapon, after all, and his prestige hit Braveheart was just as gruesome as it was epic in scope. With Passion, all those principles are on display in every minute of Christ’s final twelve hours. Streaks of blood fly as freely as Scripture, Gibson’s approach encouraging audiences to honor Christ’s sacrifice by forcing them to sit down and reckon with every grimy detail. When Jesus receives his forty lashes, the ensuing sequence goes on for several uninterrupted minutes, cracked skin and slow-motion wailing serving up palpable agony for the film’s central subject. The same goes for the walk to Calvary along the Via Dolorosa and the crucifixion itself, a nearly hour-long sequence filled with open wounds and teeth-gnashing that forces you to sit with Christ’s suffering for an uncomfortable length of time.

David Edelstein of Slate called the film “a two-hour-and-six-minute snuff movie,” and Passion certainly feels borne of the same film era that made Saw, Hostel and other torture porn movies so popular. Over the course of the film’s two hours, the clean-cut, olive-skinned Jesus (played with strained agony by Jim Caviezel) is turned into a writhing, bloody mass of stained teeth and welts. Christ’s flagellation, torture, and eventual crucifixion are treated with a mixture of awe and repulsion, Caleb Deschanel’s sumptuously detailed camerawork lingering over every lash, every stone thrown, every nail driven into Christ’s body. It’s meant to elicit both awe and disgust in equal measure, Gibson and Deschanel infusing these horrifying acts with a strangely sensuous eroticism that makes the whole affair feel nearly sadomasochistic. Its targeted Christian audience isn’t just meant to feel every inch of Christ’s suffering; they’re meant to find an almost orgasmic sense of grace in all of it. Jesus died for our sins, and Gibson wants to make sure we know how painful and powerful that was — and, in turn, to find relief and salvation in that pain.

But what’s left when all the blood stops flowing, and Jesus’ cries of agony are finally silenced? Little is seen of Christ the teacher, or Christ the savior; Gibson’s Christ is a sufferer, one who teaches through his own pain. His own grace is reflected in the weaknesses of those around him: Pontius Pilate (Hristo Shopov) is a conflicted bureaucrat who wants to give Christ an out at every turn, but is forced by politics to acquiesce to the mob’s demands. Peter (Francesco De Vito) is torn apart by his denial of Christ, as is Judas (Luca Lionello) by his betrayal. Even Simon of Cyrene (Jarreth Merz), the man tasked with carrying the cross after Christ can no longer bear it, is a small but important player in the great drama of the passion. These small dramas are some of Passion‘s more interesting moments, even now, Gibson taking a page from The Last Temptation of Christ to show the foibles of being in the orbit of such a metaphysically Great Figure.

For all the moral conflict, however, Passion does little but operate from the presumption that Christ is someone worth following. Granted, it’s not as though its intended audience needs a primer on Why Jesus Is Awesome, but within the confines of the film itself, Christ is basically Tessie Hutchison in Shirley Jackson’s short story “The Lottery” — someone at which to throw stones, a figure of pity whose suffering demonstrates our need for a better way. For a film so procedural about such an explicitly sacred, emotional event, there’s a nihilistic undercurrent that grates against the senses for those who don’t prefer their devotion drenched in blood.

Of course, it’s nearly impossible to reckon with The Passion of the Christ and ignore Gibson’s own sordid past, one from which he’s seemingly, tragically recovering, slowly crawling his way back to Hollywood acceptability. That this movie and Gibson have both been accused of anti-Semitism is an inescapable element of the movie; certainly, many Jewish viewers don’t take kindly to the film’s depiction of greedy, hook-nosed high priests like the arch, evil Caiaphas (Mattia Sbragia), while the ‘good Jews’ like Mary (Maia Morgenstern) and Mary Magdelene (Monica Bellucci) stand to the side, suffering in silence.

It’s maddening to reckon with such an enormous, complicated, messy thing like The Passion of the Christ — a film that infuses a lot of craft and sincerity into such a grimy, single-minded (and deliberately incendiary) work like this. Gibson’s epic isn’t too far removed from something like The House That Jack Built; it’s vulgar, but there’s purpose in the vulgarity. It may exhaust you, it may offend you; it may guide you through Hell into something more revelatory. And how you receive the film may depend greatly on how you feel about the man who made it.

Previous Story
Terry Gilliam’s The Man Who Killed Don Quixote finally gets a release date, and it’s for one night only
Next Story
R Kelly’s first stop out of jail? The McDonald’s where he *allegedly* goes to pick up underage girls
Popular
More Stories
[fu-upload-form form_layout="media" title="Submit Your Photo"][input type="hidden" name="ugc" value="1"][/fu-upload-form]