Drake disses Grammys during acceptance speech, gets mic cut off

"Look, if there’s people who have regular jobs who are coming out in the rain and snow, spending money to buy tickets to your shows, you don’t need this right here" 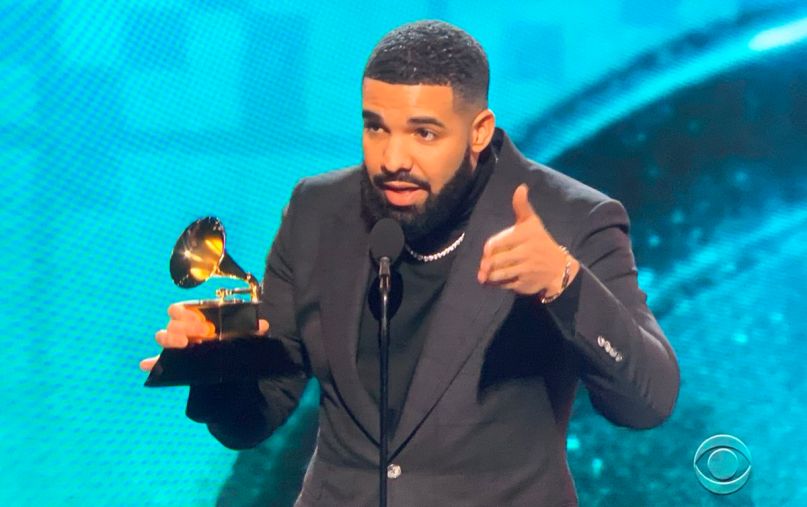 Drake gets cut off at Grammys

Drake has been vocal about his disdain for the Grammys and the lack of diversity among its nominees. He’s been noticeably absent from the last several ceremonies, and passed up an opportunity to perform at this year’s event. So it was somewhat of a surprise when the Toronto rapper took the stage at tonight’s Grammys to accept the award for Best Rap Song.

However, once Drake began speaking, his true motives became clear; he used his acceptance speech to deliver a public rebuking of the Recording Academy. “We play in an opinion-based sport, not a factual-based sport,” Drake proclaimed. “The point is, you’ve already won if you have people who are singing your songs word for word, if you’re a hero in your hometown. Look, if there’s people who have regular jobs who are coming out in the rain and snow, spending money to buy tickets to your shows, you don’t need this right here. You already won.”

It was at this point that the Grammys cut off Drake’s microphone and went to commercials.

Update: According to a Grammys representative, producers did not intentionally cut off Drake. They said in a statement, “During Drake’s speech, there was a natural pause and at that moment the producers did assume that he was done and then cut to commercial. However the producers did speak with Drake following his speech and did offer him to come back on stage to finish whatever his thoughts were. But Drake said he was happy with what he said and didn’t have anything to add.”

But why they cut off his speech ???????? pic.twitter.com/cJJbc1GISW

Watch all of tonight’s performances and see who won by following our 2019 Grammys coverage.