Film Review: Isn’t It Romantic Turns the Whole World Into a Romantic Comedy 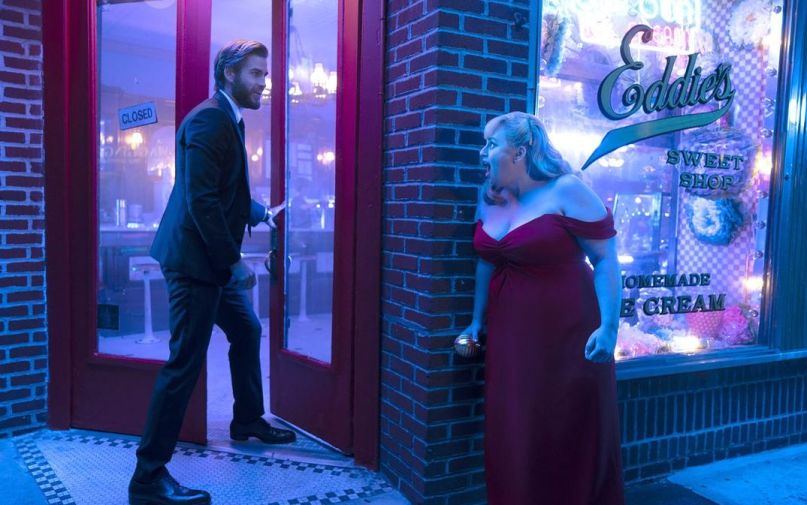 The Pitch: When Natalie (Rebel Wilson) was a little girl, gazing moony-eyed at Pretty Woman in her living room and falling in love with the idea of love, her mom was the first to tell her that women “like her” don’t get to live in such fairy tales. That early dose of reality would one day turn Natalie into a successful pragmatist, a New York City architect who accepts that her best friend Josh (Adam Devine) has no interest in her, chides her assistant Whitney (Betty Gilpin) for buying into the “lie” of romantic comedies as an adult, and chafes at the idea of living inside any kind of a fantasy.

It’s then inconvenient when an attempted subway mugging leads to Natalie suffering a head injury, and waking up in a world far glossier than the one she’s used to. A world where everything is bathed in soft light, everybody in New York City is as friendly as can be, the air no longer smells of garbage, and Natalie’s world seems to be perfect. Her crappy apartment is now a lavishly decorated penthouse with a gelato drawer, she owns every piece of clothing she could ever want, and she’s now the top designer at her firm. But it starts getting even weirder before long. Donny (Brandon Scott Jones), the weed dealer next door, is now her flamboyantly gay best friend.Blake (Liam Hemsworth), the firm’s handsome top client, is now obsessed with her. Josh stumbles into a whirlwind romance with Isabella (Priyanka Chopra), a model and “yoga ambassador”. Whitney is now all accentuated cheekbones and mean retorts around the office.

As Natalie soon works out for herself, she’s trapped in a romantic comedy. A PG-13 one, at that. And the only way out is to give in to the idea that she could be the lead in her own love story.

Genre Deconstruction Gone Pop: The clichés of the romantic comedy genre are pretty well-worn territory at this point, even as self-referential parody goes. In an era where Disney heroines are figuring out that Prince Charming doesn’t have much to offer and rom-coms themselves are often as concerned with self-love as the fulfillment of romantic connection, Isn’t It Romantic exists in a curious space between the old era of comfortable wish fulfillment fantasies and the sarcastic realism of modern genre pillars like Bridesmaids. It’s firmly entrenched in the latter while being a movie entirely built around the former, ultimately a celebration of the same genre tropes that it’s sending up at every possible turn.

While screenwriters Erin Cardillo, Dana Fox, and Katie Silberman have an astute ear for the most cloying standards of the genre (there’s a funny, the early scenes are filled with such on-the-nose cynicism that Isn’t It Romantic feels the most perfunctory when it’s trying to carry out a side of an argument about romantic comedies that few people are still bothering to have at this point in film history. Ironically, the film’s best stuff comes later in the running, when Natalie is forced to play out her obligatory beats as the pursued heroine of a rom-com. When the movie isn’t doing that weird Deadpool thing where acknowledging that a trope exists is supposed to constitute its own joke out of hand, it’s a sweetly effective entry into the same canon at which it’s taking gentle shots.

A Boy, Standing in Front of a Girl: The majority of what works about Isn’t It Romantic can be attributed to its cast, whose comic chops carry even some of the clunkiest mouthfuls of references to charming places throughout. Wilson, who’s made her name on playing self-aware riffs on “the friend” in rom-coms for some time now, delivers the film’s high-concept setup with a keen ear for timing. And as the story unfolds, with Natalie’s deeper insecurities about being the center of anybody’s attention coming to the forefront, Wilson ably lends a sense of real weight to the film’s messages of confidence and personal value.

The rest of the ensemble pops in and out, tasked with playing riffs on their usual roles, and all do well within the territory. Devine, who’s carved out a cottage industry for himself playing this exact sort of unassuming love interest in recent years, brings an easy presence to his scenes with Wilson that sells their simmering mutual attraction with conviction. Hemsworth is enjoyable doing a riff on his brother Chris’ own dressed-down comic performances, and Chopra makes a solid case for a starring role as a romantic foil in a more straight-faced rom-com. There’s a general sense of laid-back play hanging over the whole of Isn’t It Romantic, and both that and the 88-minute runtime go a long way toward ensuring that the joke never overstays its welcome.

The Verdict: It wouldn’t have been too hard to put together a version of Isn’t It Romantic that played as far meaner-spirited. One of the reasons that so many modern romantic comedies feel obligated to remark on themselves is the number of harmful cultural ideas and stereotypes that emerged from them in the first place, so there’s plenty into which the movie could’ve taken a real bite. But in its way, Isn’t It Romantic feels vastly more connected to the spirit of its subject matter by playing things more gently. Its jokes are accurate without getting vicious, its acknowledgments of Natalie (and Wilson by proxy) as an unlikely female romantic lead handled tastefully and without the condescension that could have easily accompanied the film.

Noting the number of traps Isn’t It Romantic avoids is a testament to its breezy qualities, but it’s also a bit of a disservice to what the movie accomplishes. It eventually becomes the ideal kind of genre parody, the sort that comes around to offering a few pieces of insight into its target as it goes along. Perhaps most impressively, in an era where we expect more out of our romantic comedies, it manages to hit the mark without shedding off the things that made them so lovable in the first place.