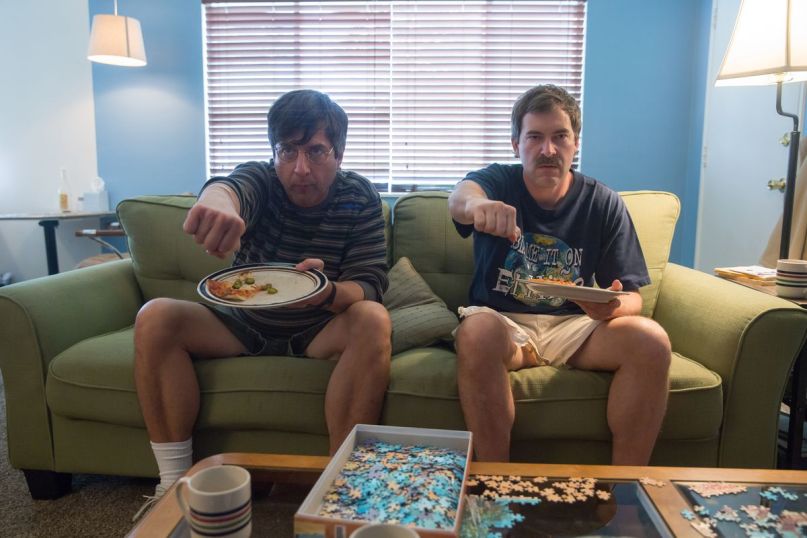 The Pitch: Michael (Mark Duplass) and Andy (Ray Romano) are two awkward, middle-aged neighbors who exist in a comfortable equilibrium — two single guys who enjoy each other’s platonic company, and no one else’s. They take pleasure in their routine: making pizzas, watching old kung-fu movies, crafting offbeat T-shirt designs, and playing a strange mix of tennis and paddleball called Paddleton. But their happy existence is upended when Michael is diagnosed with terminal cancer, forcing them to reckon with the end of both Michael’s life and their friendship. During a weekend road trip to the closest pharmacy that will sell them the end-of-life medication Michael wants, the pair do their best to make his final days as extraordinarily normal as possible.

No One Lives Forever: The beats and rhythms of mumblecore are pretty familiar for anyone who’s paid attention to the indie film scene over the last decade or so — small, microbudget interpersonal dramedies featuring halted, naturalistic performances from actors who barely vocalize above a whisper. Mark and Jay Duplass are essentially the godfathers of this school of cost-effective, slyly twee filmmaking, and Paddleton largely operates within its constraints.

For those sick of mumblecore’s endless celebration of twentysomething hipster struggles, however, Paddleton offers something a bit more novel in its exploration of the happy mediocrity of its middle-aged protagonists. Michael and Andy aren’t losers, and they hardly lament dreams denied and love lost; if they could spend the rest of eternity playing Paddleton and squabbling over pizza caramelization, they would. They’re as comfortable and intimate as an old married couple, though as they (predictably) have to assert at one point, they’re not ‘like that’. Theirs is a life of happy avoidance, which informs their dynamic in fascinating ways through Duplass and director Alex Lehmann‘s droll, unpretentiously witty screenplay.

Death Punch: No one likes to think about death, but Paddleton is preoccupied with it for every second of its brisk 90 minutes. One of Michael and Andy’s greatest loves is a rare kung fu film called Death Punch (made for the film, of course), of which footage is used for some charmingly on-the-nose signposts for Michael’s oncoming passing. It’s a movie no one else knows or cares about; even the one other kung-fu aficionado they find, the pharmacist who sells them the drugs, thinks it’s just “not bad.” But it’s a film the two of them have memorized, down to every over-dubbed line of dialogue, a rough-hewn symbol of the unique symbiosis of these two men.

With every rhetorical dodge or distracting, childlike riddle, Andy and Michael dance around the intimacy of their friendship. One recurring inside joke is a t-shirt Andy designed for Michael, featuring an incomplete game of Hangman that’s stumped him for years; when Andy finally reveals the answer, it’s heartwarming and heartbreaking in equal measure. As the hour grows closer, the two begin to open up, wondering if there’s anything on the other side. Would Michael contact Andy in the afterlife, if he could? The specter of mortality hangs over every dad joke and petty squabble, Paddleton exploring the unspoken depths of their friendship in its many quirky forms.

The Big (Terminally) Sick: None of this would work, naturally, without Paddleton‘s wonderful lead performances by Duplass and Romano. They’re both old hat at these characters (the former, as previously mentioned, effectively wrote the book on guys like Michael), and there’s an effortless charm to the way these two ordinary schmoes affectionately quibble with each other. Duplass’ dead-eyed peace with his fate is a fascinatingly zen way to look at terminal illness, which then becomes unexpectedly affecting at the moment of truth, when that facade cracks and he’s faced with the enormity of what’s to come.

While Michael’s the one staring death in the face, Paddleton is Andy’s story at the end of the day, the tale of a man torn between wanting to help his best friend and not wanting him to die. Romano has given stealthily great performances in films like these lately (he and Holly Hunter practically stole The Big Sick out from under its protagonists), and he’s practically revelatory here. From awkwardly bickering with Michael over wanting to pay for the medicine, to secretly buying a little pink toy safe to lock the pills in for “safety reasons”, Andy’s stalling tactics are heartbreaking in their transparency. He doesn’t want his friend to die, but doesn’t have the skills to hide it very well.

Romano plays these scenes with remarkable vulnerability; he’s a cargo shorts-wearing dad type through and through, but his big, sad eyes shine through with love for his best friend. The two spend much of the film together, but occasionally Lehmann lets Andy wander off to process Michael’s decision in his own way. A running joke between the two is Andy’s crafting of “the perfect halftime speech,” one he claims he’ll “sell to a coach one day”. It’s clearly been a long bluff between them for years, but in one scene in a dive bar bathroom, we get to see Andy deliver the speech to a mirror, and it would put Coach Taylor to shame. Romano stammers his way through, avoiding eye contact even with himself, but it’s a supremely clear, intimate moment that speaks volumes to Andy’s character. He’s the kind of guy who pathologically avoids grand gestures, but his heart runs over with a deep idealism and love for those around him. It’s the kind of gentle role at which Romano excels, and Paddleton is worth watching for his performance alone.

The Verdict: Despite existing within the auspices of a predictable subgenre of indie film, Paddleton manages to affect and delight in surprising ways. Duplass and Romano make for a tragically adorable pairing, the kind of twee duo that would grate in lesser hands but instead becomes a testament to the deep platonic love two friends can have for each other — even as it ends. It’s a film about how comprehensively ill-equipped we are to handle the enormity of death, and the ways in which we try to put it off or avoid thinking about it. We’ve all got our own Paddletons, in one way or another — the things we do, the people we spend time with, to while away the hours until our lives are over. In exploring the significance of these habits, and the connections we forge through them, Paddleton is a sweetly existential surprise.

Where’s It Playing?: Paddleton is currently shrugging against the dying of the light on Netflix.