Film Review: The Prodigy Lives, and Ultimately Dies, By Its Creepy Kid Horrors

Something's wrong with Miles, and before long, same goes for the film around him 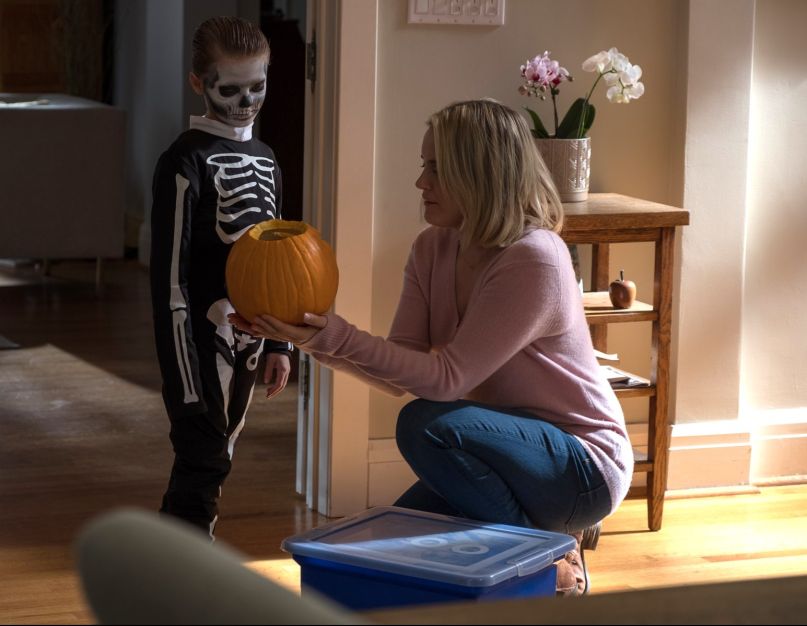 The Pitch: On a fateful night in 2010, two events take place simultaneously. In rural Ohio, a notorious serial killer known for abducting, dismembering, and eventually killing his young female victims is killed in a police raid. In suburban Pennsylvania, Sarah (Taylor Schilling) gives birth to a healthy baby boy and names him Miles (Jackson Robert Scott). As Miles gets older, he demonstrates remarkable intelligence, even as his social skills consistently lag behind. But by the time he turns 8, his intelligence begins to manifest itself in more unsettling forms, from fits of violence to Miles speaking in strange tongues in his bedroom, insistent that a presence has been passing in and out of his body. Soon, Sarah’s absolute love for her child will be pushed to gruesome extremes, as she attempts to help Miles before losing him for good to whatever else might be inside her son’s head.

The Pains of Childbirth: Going back to the days of Rosemary’s Baby and The Exorcist, the horror genre has long mined chills from one of the simplest, most arguably unanswerable questions there is: what if you had a truly evil child? At what point does parental love have to give way to the rational prevention of that evil’s spread? The Prodigy doesn’t break any new ground in the field of horror films about loving mothers forced into the unspeakable to protect their children, but director Nicholas McCarthy ably builds a strong sense of escalating dread out of Sarah’s slow realization that Miles may not only be dangerous, but also some level of aware of it.

A great deal of that dread emerges from the pair of leading performances at its center. While her husband John (Peter Mooney) is mostly present to be more immediately panicked about Miles than Sarah and/or disappear for long chunks of the film, Sarah is the one who has to convey many of the film’s low-budget shocks through physicality alone. Schilling is an able horror lead in this respect; in addition to serving up some exceptional “scream face” in the later part of the movie, the Orange is the New Black star brings a trembling anxiety to her performance that elevates the stakes even when much of the film’s stiff storytelling falls short. Likewise, even if Scott is tasked with delivering some pretty distateful dialogue, even for a kid in a hard-R horror flick like this one, the young actor manages to find speeds between cherubic and sinister, turning Miles’ slow transformation into a frightened child’s losing battle with his own brain.

Coming of Age: However, too little else about The Prodigy distinguishes itself aside from its performers. While there are a couple of interesting visual tricks up McCarthy’s sleeve throughout (Sarah seeing a distinctly different face over Miles’ own is the film’s one great scare), the film half-considers most of its ideas without ever meaningfully developing them. Sarah and John drink in their car on date night and muse about giving up their hard-partying lives for parenthood, but neither the characters nor the film bring this point up again. Likewise, John’s history with his abusive father is mined for a character-based shock or two, but the film never connects it to Miles’ plight in any meaningful way. Most of the early details aren’t so much paid off later in the film as simply mentioned again for a quick “a-ha” of recognition, and the clearer it becomes what’s happening to Miles, the less and less engaging the film becomes.

It’s not that where the film goes isn’t rife with possibilities, either. The Prodigy is a pretty brazenly gory film at points, and given the youth of its pro/antagonist, there was a shot at something genuinely transgressive on the table here. However, the closest the film comes to pushing on any real boundaries is in an exchange between Miles and a keen-eyed therapist who may know more about his condition than anybody else. In that one moment, The Prodigy turns lurid and grotesque, but it also feels, at least for a moment, like it’s doing something halfway memorable. Then, it’s back to the old standards, buzzing flies betraying secrets and purposeful car crashes and the like.

The Verdict: Every time The Prodigy seems to be shoring up momentum, it betrays its disappointing insistence on begging the audience to keep wondering what’s wrong with Miles, even as the very first scene of the film more or less declares it outright. Because of this, there’s no mystery in the back half of the film where mystery should be, no sense that anything happening to Sarah or Miles is going to surprise. While it’s a reasonably paced thriller, The Prodigy is almost wholly devoid of real scares, instead relying on the assumption that a kid doing violent adult things is enough to sustain a 90-minute movie. It’s neither far over the top enough to fully entertain, nor compelling enough to frighten as a horror flick. For lack of more eloquent phrasing, after a while, The Prodigy is just sort of there.