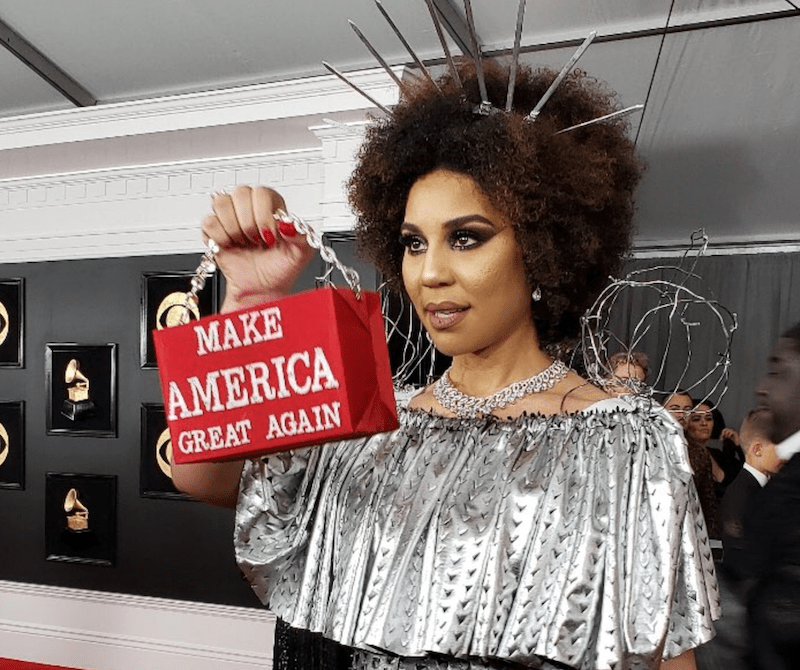 Joy Villa at the 2019 Grammys, photo via Twitter/@ZulekhaNathoo

Joy Villa has essentially made a career out of being aggressively pro-Trump. For each of the past two years, she’s proudly flaunted her conservative ideas with her Grammys attire. In 2017, she wore a “Make America Great Again!” gown with a “Trump” train, which she followed up last year with a gown featuring a fetus in a rainbow womb along with a “Choose Life” handbag. At Sunday night’s Grammys ceremony, she was back at it again with perhaps her most groan-worthy garb yet as she quite literally personified POTUS’ wall.

With a MAGA bag in hand, Villa wore a sharp (literally) silver dress with spikes protruding from her head and — here’s the killer — barbed wire on her shoulders. Later on, she removed the silver outer layer to reveal a second dress recreating Pink Floyd’s iconic The Wall cover with the words “Build the Wall” drawn in red across the back. In a red carpet interview with Variety, she said the outfit “is representing the wall. This is what I believe in. I believe in the president.”

Of course, the next words out of her mouth were, “I released an album called Home Sweet Home that just came out, and it’s all about my love for America.” When Villa wore that MAGA dress in 2017, her EP I Make the Static jumped up the charts; should we really be shocked she’s once again used a political statement as a publicity ploy?

(The EP, by the way, opens with a rendition of “The Star Spangled Banner” and has a track called “Make America Great Again!”.)

Villa wasn’t the only musician to support Trump on the red carpet. Glam rocker Ricky Rebel wore his own version of Villa’s 2017 dress, this time as a blazer with matching mirror glasses. Watch Villa’s Variety interview below, along with photos of both musicians’ outfits.

Musician Joy Villa shows up to the #Grammys each year in pro-Trump attire. Some call it a PR stunt. She calls it being “outspoken” & something that’s “very difficult” given her views. This time, she says her dress represents the Wall. Note the barbed wire at her neck. @CBCNews pic.twitter.com/3pKPwG7xwa