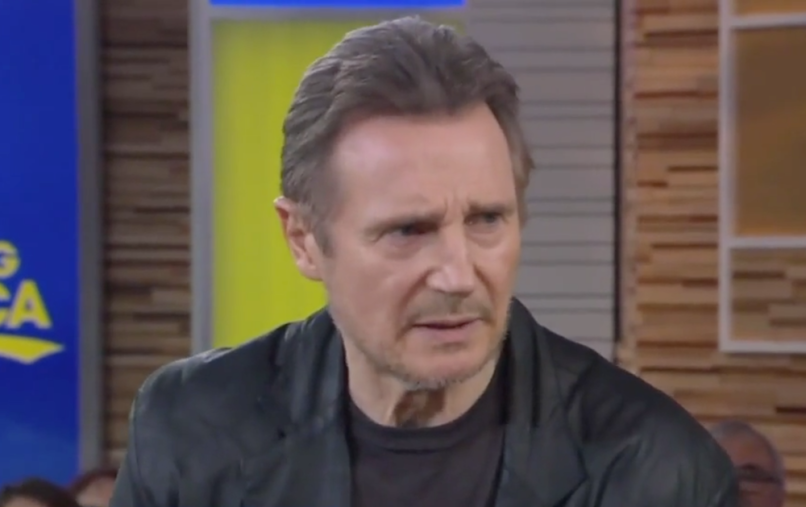 Liam Neeson stepped into controversy on Monday while making the press rounds for his new movie, Cold Pursuit. After a rough 24 hours of public backlash from social media and major news outlets, the Irish actor sought to address what many have viewed as his racist remarks with a pair of Tuesday morning appearances on US television.

The trouble began when an interview with Neeson was published by The Independent. Asked how he tapped into the need for revenge felt by his character in Cold Pursuit, he recalled an incident 40 years prior when a female friend was brutally raped. After learning the alleged rapist was black, Neeson said he “went up and down areas with a cosh, hoping I’d be approached by somebody – I’m ashamed to say that – and I did it for maybe a week, hoping some [Neeson gestures air quotes with his fingers] ‘black bastard’ would come out of a pub and have a go at me about something, you know? So that I could… kill him.”

Neeson freely admitted that the incident was “horrible, horrible” and that he “did learn a lesson from it,” but the damage was done. On Tuesday, he appeared on Good Morning America to again plug Cold Pursuit, but spent much of his talk with co-host Robin Roberts attempting to clarify his remarks — while doubling down in his sentiments.

He began by again openly admitting his desire for revenge upon learning of his friend’s rape, and the subsequent realization of how wrong he was. “It really shocked me, this primal urge I had. It shocked me and it hurt me,” Neeson recalled. “I did seek help. I went to a priest, for my confession… I had two very, very good friends that I talked to. And believe it or not, power walking, two hours every day, to get rid of this.”

“I’m not racist,” Neeson continued. “This was nearly 40 years ago.” He went on to contextualize his world four decades ago, back when he was living in Northern Ireland as a 20-something during The Troubles. It was a time of ethno-nationalist violence that saw Protestants and Catholics engaging in “guerrilla war” against each other for decades.

Steering the conversation back towards Neeson’s remarks themselves, Roberts pointed out that it appeared the actor had focused on race when questioning his friend, though he clarified he did ask about other features like height and body size. Roberts then asked if Neeson thought he would have reacted similarly if his friend had said something other than “black.” “Oh, definitely. If she had said an Irish, or a Scot, or a Brit, or a Lithuanian, I know I would have had the same effect,” he replied. “I was trying to… show honor to my, stand up for my dear friend in this terrible, medieval fashion. And I’m a fairly intelligent guy, that’s why it kind of shocked me when I came down to Earth after having these horrible feelings. Luckily no violence occurred, ever. Thanks be to God.”

Asked about the “teachable moment” in this story, Neeson responded, “To talk. To open up. To talk about these things. We all pretend we’re all politically correct. In this country — it’s the same in my own country too — you sometimes just scratch the surface and you discover this racism and bigotry. And it’s there.”

Roberts offered her own two cents, saying that while she appreciated Neeson owning up to his unacceptable thoughts and actions, he still had to “acknowledge the hurt:” “Even though it happened decades ago, the hurt of an innocent black man knowing that he could have been killed for something he did not do because of the color of his skin.”

“Of course, you’re absolutely right,” he continued as Roberts reiterated the need to understand the impact of his words. “And at the time, even though it was nearly 40 years ago, I didn’t think about that. All those things surprised me. But it was this primal… hatred, I guess, that really shocked me, when I eventually came down to Earth and saw what I was doing. Going out and looking for a fight… Violence breeds violence; bigotry breeds bigotry.”

Watch the whole interview below.

Later on, Neeson sat down on Live with Kelly and Ryan, where he was warmly greeted by the audience. Again, the conversation opened with Neeson’s controversial remarks, though the actor was clearly somewhat drained having just discussed them in depth on GMA.

“I just feel we need to be honest,” he said. “I grew up in a society where there was a lot of bigotry… So when I conjured it myself, I just needed to be honest. Rather than backtrack and say, ‘I didn’t say that, I didn’t mean that.'”

Watch that clip below.