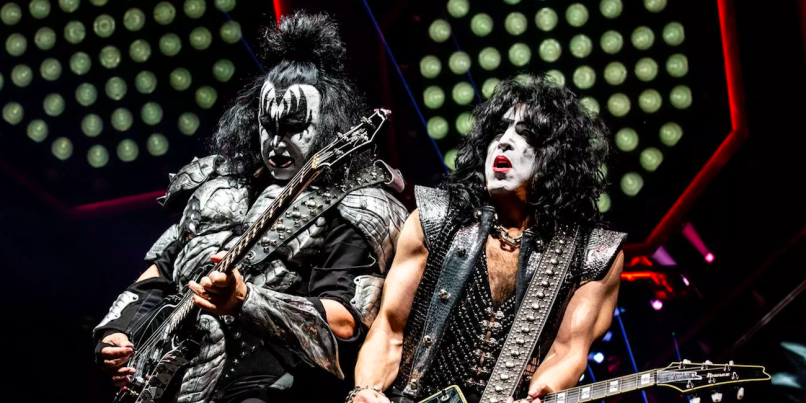 Setting the Stage: KISS have told this tale before. In 2000, following a lackluster tour in support of Psycho Circus, the hottest band in the world announced that they were going to hang up their platform boots after one last trek around the globe. It turned out to be a feint or a cynical marketing ploy, depending on your point of view. The retirement was called off, and many more tours followed.

This time around, we might have to take KISS at their word. Both Gene Simmons and Paul Stanley are pushing 70 and are not as nimble as they once were. At certain points during this second show of the band’s North American farewell tour, Simmons rested his bass guitar on a small platform as he was playing it, likely to give his back a little relief from the instrument’s weight. Why put their bodies, voices and reputations through any more time trials? Better to kick back and sign some more licensing deals and enjoy their autumn years. Or at least save their energy for any depositions that lay just over the horizon.

Whether this is the last go round for KISS or not, the siren call of a farewell tour was heeded by thousands of Portlanders, just as it was for Slayer when they bulldozed through the area last summer and for retiring pop star Elton John just last month. Unlike either of those shows, this was an intergenerational affair. The crowd was spotted with kids, many sporting face paint and some form of KISS gear (much to the chagrin of the street preachers haranguing the folks waiting to get inside the Moda Center). This was the rock version of a family trip to the carnival, but with a show that features a lot more volume, fake blood, and pyrotechnics.

Taking the Stage: The beauty of having a bunch of youngsters in the audience is watching them react with surprise at the elements of a KISS show to which longtime fans have, by this point, become almost immune. They hit all the spectacular highlights. Gene breathed fire and spit blood; Paul ziplined across the audience to play a couple of songs from an airborne platform; Tommy Thayer’s guitar shot sparks; and Eric Singer’s drum set rose into the sky as he soloed. Flames. Fireworks. Mugging to the audience like seasoned vaudevillians.

At this point in the band’s long history, there is little hope or need for any big surprises. That’s what has been keeping them aloft for decades: a workmanlike approach to the rock concert that hits all the hits, scatters a few recent album cuts in, and surrounds it all with visual accoutrement that are as bright and shiny as their record covers and stage wear.

Did it sound good? Of course it did. Unlike the strands that kept getting caught up in the grease paint on their faces, not a hair was out of place the whole evening. The songs you came to hear — “Cold Gin”, “Deuce”, “Shout It Out Loud”, “I Was Made for Loving You”, “Beth” — sounded as fresh and meaty as ever. The tunes that you didn’t think about until this evening — ”Psycho Circus”, “Say Yeah” — erupted in ways their studio version never could. It was crisp and efficient and as loud as thunder.

The only elements that were somewhat worse for the wear are Paul and Gene’s voices. Stanley’s higher register was a bit frayed and threadbare, and Simmons, during his spotlight turns on “I Love It Loud” and “God of Thunder”, crackled, at times, like dry leaves. Hard to fault them for that, though, even if so much care has been made to make sure nothing else in the show fell out of alignment.

What was missing from the show, outside of a bit of vintage footage of KISS in their ‘70s heyday, was any real acknowledgement from the band that this was the “End of the Road”, as their tour name indicates. Stanley frequently referenced the first show they played in Portland, at the long-gone Paramount Theater, but there wasn’t a moment that so many other farewell tours hit on where they lingered onstage to drink in the applause or emotional speech about how far they’ve come. They punched the clock, and got in and out of Portland before the confetti hit the floor.

Artistic Support: KISS knows that no mere band was enough to warm up the crowd on their “final” Portland show. Oh no. They had to pull out the big guns. We’re talking of course about performance painter David Garibaldi. Over a loud soundtrack of EDM-infused rock classics, this L.A.-based artist whipped together portraits of Freddie Mercury, Jimi Hendrix, and, of course, KISS. In a way, it was the perfect gaudy accompaniment for the big show.

Setlist:
Detroit Rock City
Shout It Out Loud
Deuce
Say Yeah
Heaven’s On Fire
War Machine
Lick It Up
100,000 Years
God Of Thunder
Cold Gin
Psycho Circus
I Love It Loud
Hide Your Heart
Let Me Go, Rock ‘N’ Roll
Love Gun
I Was Made For Lovin’ You
Black Diamond

Encore:
Beth
Do You Love Me?
Rock and Roll All Nite

Photos of KISS at the Moda Center in Portland, Oregon: