Misfits’ Doyle: I have to do $50 meet-and-greets because fans are “stealing” music

"You think I want to meet all these fucking people? I don't." 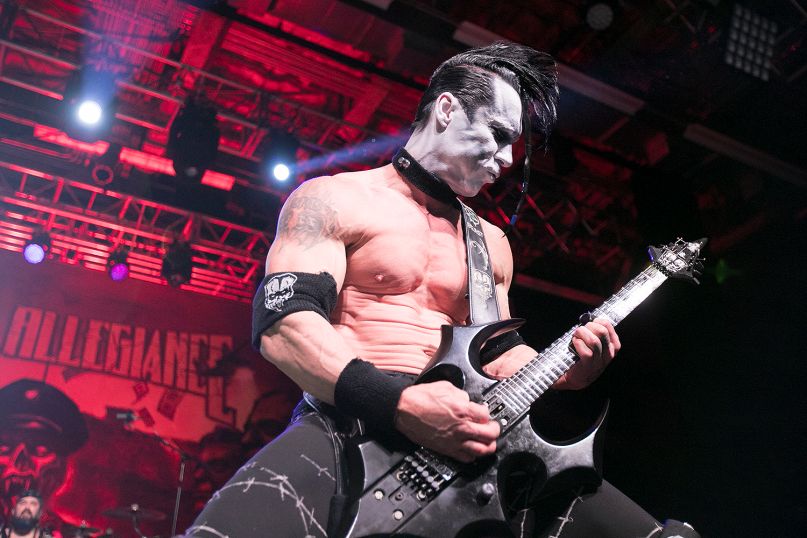 Taking a picture with the photogenic Doyle Wolfgang Von Frankenstein is hard to pass up, and fans are willing to pay a premium to pose with the hulking, makeup-wearing Misfits guitarist and solo artist. But the next time you have your arm around the legendary rocker while throwing up your horns for the camera, keep in mind that at that very instant he likely rather be taking a shower.

In a new interview with The Liquid Conversations podcast (listen below), Doyle was asked about how the music industry has changed during the course of his nearly 40-year career.


“The thing that sucks the most about it is that everybody steals music,” he responded. “You spend thousands and thousands of dollars to make a record and all of these scumbags are just stealing it. And then they want more, and then you’re a dick because you’re doing a meet-and-greet for 50 fucking bucks to make up for it, which you don’t want to do. You think I want to meet all these fucking people? I don’t. When I’m done, I just want to take a shower and go to bed.”

As for the fans who give him flak over charging $50 for a meet-and-greet, Doyle added, “They can kiss my ass. You want to steal shit? If I was making motorcycles and they came and took one, would that be a crime? Why can’t we punish people for stealing songs? There should be a $10,000 fine for that.”

The guitarist is also not a fan of streaming services like Spotify, saying, “You make nothing, it’s $9 a month [for a subscription], and you can listen to a song 10,000 times if you want.”

He added, “I can’t do the math, but how much do you think the bands get? It’s like a hundredth, maybe a thousandth of a penny you get. My girlfriend [Arch Enemy singer Alissa White-Gluz] went to [Spotify’s] office, said that shit was insane. I would’ve went fucking mental, I would’ve started breaking everything.”

Looking back, Doyle praised Metallica for their lawsuit against Napster. “Lars Ulrich was right when he sued fucking Napster,” he said. “And everybody thought he was a dick. He didn’t do it for him. He’s got the fucking money. He did it for fucking jerkoffs like me.”

However, when the interviewer tried to get his thoughts on a multimillionaire like Taylor Swift, Doyle actually praised the pop star. “Do you know how hard that girl fucking works? She doesn’t stop all day. I guarantee you. She gets up early as fuck, she has some coffee, she takes a shit, she’s doing this, she’s doing that… by the time her show comes up, she does the show, this is not bullshit.”

Doyle will be playing another classic Misfits show with Glenn Danzig and Jerry Only on April 27th at the Allstate Arena in Rosemont, Illinois. Tickets are available via StubHub.