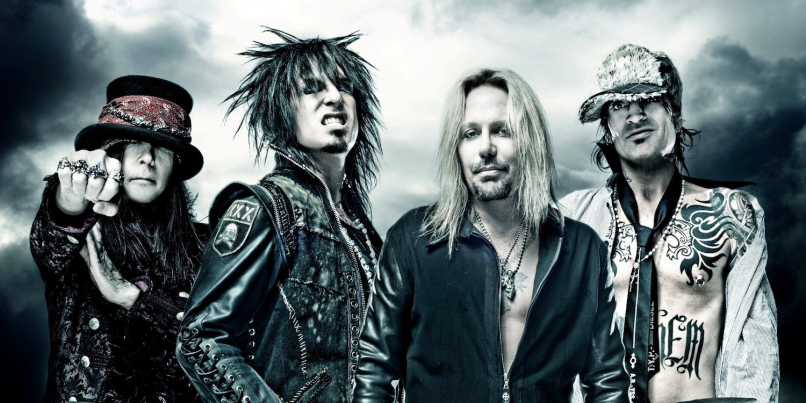 One month before the March 22nd premiere of The Dirt, the warts-and-all biopic on Mötley Crüe based on the band’s 2001 tell-all book of the same name, the L.A. rockers have given fans a taste of the new music they recorded for the film.

Update – March 22nd: Mötley Crüe have now unveiled the full music video (watch below) for “The Dirt (Est. 1981)”. The song features a guest appearance from rapper Machine Gun Kelly, who is starring in The Dirt as Tommy Lee.

The Crüe initially dropped a clip of a tune online, featuring footage of the band in the studio with producer Bob Rock. The veteran rockers recorded four new tracks for The Dirt last year, working once again with Rock, the producer who was behind the boards for the band’s 1989 juggernaut Dr. Feelgood and their self-titled 2001 album (a.k.a. the one without Vince Neil).

There could be a chance to hear the full song or one of the other three new tunes that the Crüe recorded soon. Bassist Nikki Sixx will be appearing on the radio show Jonesy’s Jukebox today (February 21st) and said on his Twitter account, “Maybe I’ll play some nü @MotleyCrue.”

Exciting as all this is, the Crüe are also making it clear that they are still keeping to their 2014 pledge that they will never tour as a band again. When he confirmed the details of the new songs on social media, Neil also said, “For those of you who don’t understand … we signed a contract not to tour anymore. We never broke up or said we would never make music again. Hope this clears it up.”

Along with the song, the band unveiled the cover artwork and tracklist for the soundtrack to the The Dirt. The list of songs can be seen below, included among them a cover of Madonna’s “Like a Virgin”. The album also comes out on March 22nd, with pre-orders are available here.