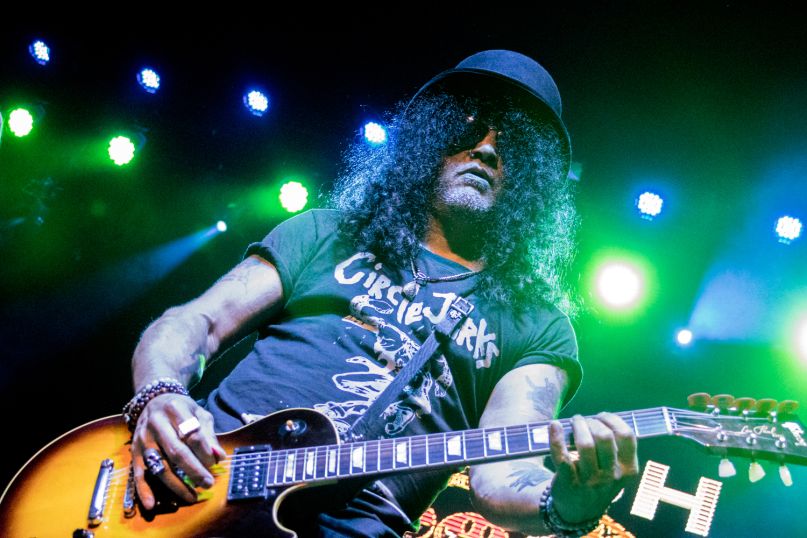 It’s been more than 10 years since Guns N’ Roses released their last album, Chinese Democracy, but now with Slash and Duff McKagan back in the fold, the wheels are turning on a proper follow-up.

In December, GN’R guitarist Richard Fortus said in an interview, “We are going to try to do another record and get it out soon,” adding, “I think it will happen faster than you think.”


Fortus’ comments came shortly after singer Axl Rose told the crowd in Hawaii at the final show on Guns N’ Roses’ mega-successful “Not in This Lifetime Tour” that the band “can’t do what’s next until we finish this, right? Now that all that’s done, we can get on with things.”

In a new interview (watch below), Slash told the Japanese news outlet TVK Rock City, “Axl, Duff, myself and Richard have all talked about… there’s material and stuff going on already for a new record. It’s just, with Guns N’ Roses, you don’t go, ‘Oh, there’s a plan, and it’s gonna be like this,’ because that’s not how it works.”

He added, “Basically, the only real answer to give is we’re hoping to put a new record out, and we’ll just see what happens when it happens.”

The new disc would be the first collection of original songs featuring Axl, Slash, and Duff since 1991’s Use Your Illusion albums.

In the meantime, Slash will be very busy on the road this year with his outfit Slash Ft. Myles Kennedy and The Conspirators. In addition to winter and spring treks in Europe and South America, respectively, they recently announced a North American tour that will run from mid-July through mid-August.

As far as the other GN’R members, Axl did actually release new music recently, in the form of the song “Rock the Rock” for an episode of New Looney Tunes, while Duff is working on a solo album with producer Shooter Jennings.

For now, you can pick up Guns N’ Roses’ classic albums at Reverb LP.