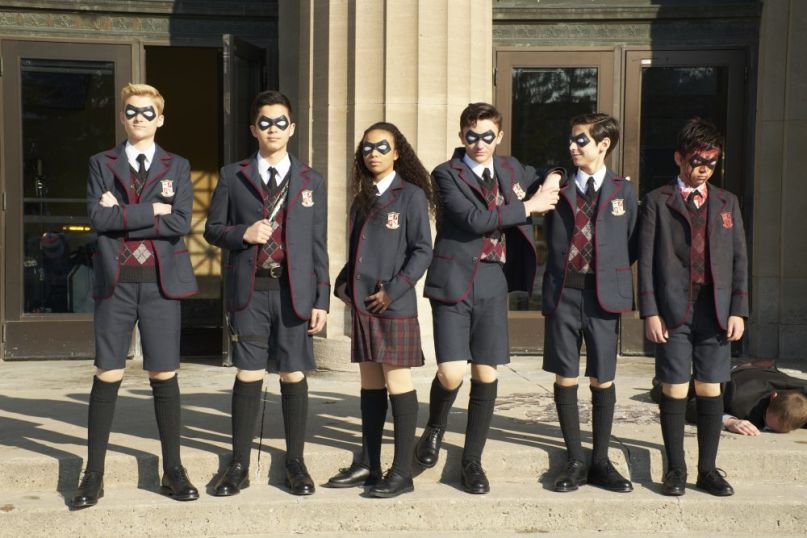 The Pitch: In 1989, a mysterious event caused 43 unrelated women to immaculately conceive and birth children; immediately afterward, the enigmatic billionaire Reginald Hargreeves (Colm Feore) adopted seven of them, sensing their extraordinary nature and grooming them to become a superhero team known as the Umbrella Academy.

Fast-forward to modern day, and the remaining Hargreeves kids are by no means all right. Luther (Tom Hopper) is a hulking daddy’s boy living in isolation on the Moon. Knife-wielding Diego (David Castañeda) is a brooding solo crime-fighter. Allison (Emmy Raver-Lampman) is a celebrity estranged from her daughter after misusing her ability to utter ‘rumors’ that become true. Klaus (Mortal Engines‘ Robert Sheehan) is a reckless drug addict who stays doped up to dampen his ability to commune with the dead. And Vanya (Elliot Page), ostracized for having no powers of any kind, is just trying to live a normal life.

However, they’re all brought back to the Umbrella Academy (and each other’s lives) by the one-two punch of their benefactor’s sudden death and the re-emergence of the unnamed Number Five (Aidan Gallagher), their teleporting sibling who disappeared when they were kids. Back in his teenage body, Number Five brings a portent of doom from the future: the world’s about to end in eight days, and only they can stop it. You know, provided they can get over their respective interpersonal hangups and successfully avoid the two mysterious assassins (Mary J. Blige and Mindhunter‘s Cameron Britton) sent to take them down.

Desolation Row: Adapting such a deeply weird comic book series (penned by My Chemical Romance‘s Gerard Way) couldn’t have been easy; the Umbrella Academy books are a sprawling story tracking years of family trauma, multiple timelines, and more off-kilter character concepts than you can shake a stick at. For what it’s worth, showrunner Steve Blackman (Legion, Altered Carbon) just about pulls off the juggling act, packing every minute of the season’s ten hour-long episodes with reams of character exposition, over-the-top superhero action, and quirky dark comedy.

The show obviously builds on and cribs from other successful genre shows that came before: picture Legion‘s Expressionistic cinematography used on the Burtonesque production design of A Series of Unfortunate Events, and that’s not far off from The Umbrella Academy‘s tone and look. Even the more comic-booky elements of the graphic novel are preserved to grotesque effect, from Luther’s cartoonishly bulky upper body (the result of events best revealed by the series itself) to the household’s sentient simian butler Pogo (Adam Godley). Episode six even features a highly stylized pas de deux between two of the leads that evokes the dance-related theatricality of FX’s Legion.

That’s not the only way The Umbrella Academy uses music, either. There’s a Suicide Squad omnipresence to the show’s music choices, to varied results. The first episode introduces the characters in montage to a violin-heavy medley from Phantom of the Opera played by Vanya, then features a gruesomely stylized shootout in a donut shop set to “Istanbul (Not Constantinople)”, in which tween assassin Number Five warps from place to place stabbing goons in the neck. Like a lot of the series’ charms, the soundtrack is a case of slowly diminishing returns, but it never truly feels out of place.

The Ghost of You: Of course, it’s not all wisecracks and ironic needle-drops over at The Umbrella Academy, as the show keeps the focus on its dysfunctional family of superheroes forced to reconcile in the wake (and the prospect) of tragedy. Think of it like The Royal Tenenbaums meets Watchmen, as a group of gifted youngsters are broken by their fame and the manipulations of their father figure, then struggle to patch up their wounds after he’s gone. As kids, they were treated as little more than lab rats by their father, abused and neglected in order to bring out the qualities that might make them great superheroes. Instead, it messed them up in ways that come back to haunt them in adulthood, a shared trauma that ironically becomes the thing to bring them together as a team. Come to think of it, devotees of The Haunting of Hill House might also gravitate to Umbrella Academy‘s deep focus on the various neuroses of its fractured family, and their attempts to get/stay together as the depths of their father’s machinations in their youth come to light.

It’s here that The Umbrella Academy shines, spending its best time on building an ensemble of dynamic, interesting new characters. Hopper and Gallagher are particular standouts, Hopper leveraging the deliberate strangeness of Luther’s beastlike physicality to illustrate the discomfort he feels around the rest of his family. As for the teenage Gallagher, he does a tremendous job playing a 60-year-old man in a young man’s body, and it’s a riot to see him command a room (or clear it of baddies, depending on the scenario) in a clean-cut schoolboy’s uniform.

The showiest role undoubtedly goes to Sheehan’s Klaus, a lecherous queer drug addict channeling everyone from James Franco to the Joker as he preens and snarks his way through the series. His performance most teeters on the knife’s edge of too-much-itude, but the show smartly calibrates his quirks as the events of the show take Klaus in unexpected directions (and/or timelines). Still, he’s got energy and charisma to spare, which helps him navigate The Umbrella Academy‘s occasionally arch tone, and he might well become a fan favorite. Castañeda’s self-serious Batman act makes him a great contrast for the more outsized personalities on the team, and Raver-Lampman most quietly channels her character’s inner pain.

I’m Not Okay: While The Umbrella Academy has a hell of a lot going for it (including an incredibly strong pilot that manages to throw a lot at the viewer, both tonally and plot-wise, without losing them), it’s hardly without its flaws. Between no fewer than eight main characters and a host of other subplots, it can be difficult to track the various twists and turns of The Umbrella Academy‘s various storylines. There are the dual crises of the impending apocalypse and the leads’ tattered relationships to contend with, which then become further complicated by a host of other wrinkles including altered timelines, a secret society (led by Kate Walsh‘s mercurial Handler) that kills people to alter the past, and the aforementioned duo of masked assassins played by Blige and Britton. To the latter’s credit, the two of them have wonderful chemistry, playing Hazel and Cha-Cha (yes, those are their names) as world-weary comrades broken down by their bloody day job. As their dynamic starts to sour, however, the show seems to struggle to find ways to keep them active in the narrative.

Which brings us to Elliot Page, the A-list movie star who has top billing in the credits of this series. Simply put, he gets very little to do as Vanya, at least until the final few episodes; her status as outcast and outsider largely relegates him to more mundane subplots, as she intermittently advises from the sidelines and tries to live a normal life (even starting a budding romance with a really nice-seeming guy named Leonard (John Magaro)). The significance of Vanya’s character becomes more apparent as the season nears its close, but it takes a really, really long time to get there, and until then Page is dampened by the wallflower he’s been cast to play. Perhaps that’s purposeful on the part of the show — much like Page, Vanya has long been pushed to the sidelines in favor of her flashier siblings — but it also seems a waste of such a dynamic, high-profile actor.

Famous Last Words: It takes a certain tolerance of quirk to like, or even love, The Umbrella Academy. With its over-the-top characters, narrative twists, and droll stylistic flourishes, the show threatens to overstay its welcome by its closing episodes. However, thanks to a strong central cast and a clear sense of personality, Netflix’s latest streaming series manages to turn a show about a family of superheroes into a long, dark look at shared trauma and the ways it reflects on ourselves and the people around us. The inaugural class of the Umbrella Academy may be working to change the future, but they have to conquer the past first.

Where’s It Playing?: The Umbrella Academy teleports onto your TV screens with a fresh new face on Netflix starting Friday, February 15th.