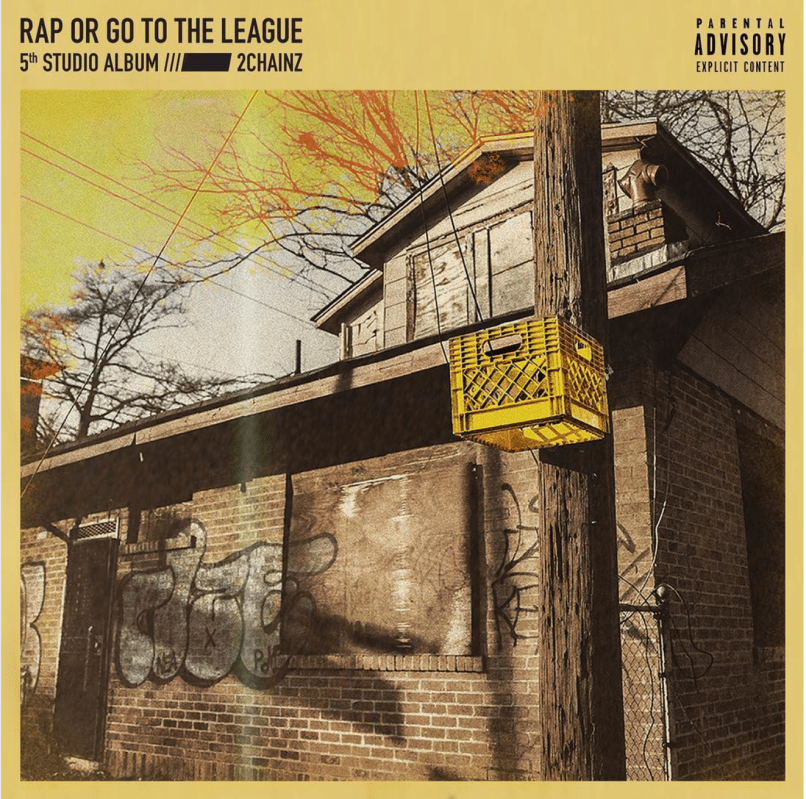 The Lowdown: On his fifth studio album, 2 Chainz steps into the rap arena as Tauheed Epps — the trap adjacent mastermind behind two stage personas and the mortal man listeners have been keen to meet since the inception of Playaz Circle. The title Rap or Go to the League is a reference to the career choices often bandied about as the only viable options for young men seeking to escape opportunity deserts and the accompanying circumstances of generational poverty.

Arriving two years after his 2017 studio album, Pretty Girls Like Trap Music, and one year removed from The Play Don’t Care Who Makes It EP, Rap or Go to the League opens with a tale of loss girded by a weeping soul refrain from Marsha Ambrosius. Recounting news of the death of his partner Lil’ Fate’s son immediately frames 2 Chainz as a man for whom tragedy is familiar but impossible to digest when confronting the grief of a fellow father and friend. He caps the song with a somber note that cuts straight to the cost of wading a little too deep into the streets: “If you doing something to make your parents have to bury you, you may want to slow down.” The message is abundantly clear: this album — like 2 Chainz’s life — is not about the short-lived glory of being a gangster. This is the backstory of a man who has played the long game in every game and always had his sights set on the chip. This time he just happens to be in championship shape. Anything done in the past was just a means to this particular win.


The Good: Buoyed by production from Pharrell Williams, Terrace Martin, Mustard, WondaGurl, Mike Dean, and Da Honorable C.N.O.T.E, Rap or Go to the League finds 2 Chainz prioritizing an autobiographical narrative over heavy-handed flossing, overconsumption of controlled substances, and snub-nosed flex. He is given to refreshing honesty — from the open embrace of his marriage on “Rule the World” to dodging temptation on the bounce and hyphy hybrid “2 Dollar Bill” — in a clearing of the conscience that thankfully avoids a sizable inventory of regrets. Listeners are treated to the less than savory details of his personal experience dabbling in the streets on the 9th Wonder-produced “Threat 2 Society” (“I done some things I ain’t proud of/ Like sold my mom drugs”) and subsequent tracks “Statute of Limitations” and “I Said Me” (“When my daughter asked me what a drug dealer was, I said, ‘me’”). “NCAA” deftly parallels the trap and collegiate sports, both of which require “the young and dangerous” to pay a hefty price to participate. “Rule the World” and “Girl’s Best Friend” are love songs that recall 2 Chainz’s knack for spitting syrupy game. The foil to 2 Chainz’s candor is the characteristic turn-up that keeps him knee-deep in a healthy dose of drip, as demonstrated by the Young Thug feature “High-Top Versace”.

The Bad: Breezy reworks of classic rap and R&B tracks are barely satisfying before nostalgia gives way to beats that would be criminally thin without a bass line. The Kendrick Lamar feature “Momma I Hit a Lick” unsurprisingly leans into lyrical showmanship punctuated by twinkling bells and the signature ATL snap. Too cool to black out like K.Dot, Chainz casually holds his own. “Sam” is an exasperated lesson in the cost of wealth for black men who see success in a system that is also designed to kill them. Though sincere in his efforts, 2 Chainz is less adept at doling out coherent advise than he is at providing a living example of how to thrive by showing up on wax, demonstrating a diverse range of emotion, delving into his past to illuminate less obvious escape hatches out of the trap, and effectively throwing his weight around in the mix with other top-tier spitters.

The Verdict: By Rap or Go to the League, 2 Chainz is a veteran rapper of a certain age who posits himself to be at the top of his game. Unlike the outsized projections rap stars routinely make to seem more powerful, 2 Chainz assessment of himself is actually correct. That kind of career longevity is rare in the league.

Buy: Get all your 2 Chainz vinyl here.