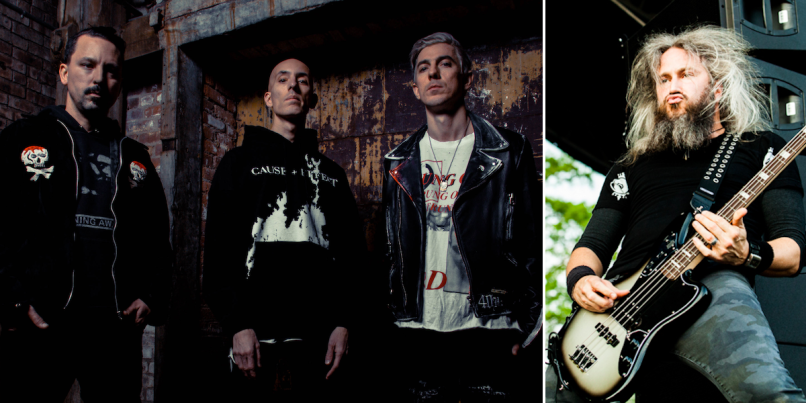 It’s been nearly eight years since the last album from Dub Trio, the three-piece dub-metal pioneers whose members have studio and performing credits with mega stars such as Lady Gaga, Matisyahu, The Fugees, Mos Def, and Common. Now, the group is back with a new single and video, “Fought the Line”, featuring Mastodon singer-bassist Troy Sanders, and it’s premiering right here on Heavy Consequence.

The track appears on Dub Trio’s forthcoming album, The Shape of Dub to Come (due April 26th), which features the band expanding their effects-driven, groove-based alt-metal, allowing more space for echoing, reverberating dub effects to slither and dissipate. They also bring in a handful of high-profile guests, including Sanders, guitarist-singer Buzz Osborne (Melvins) on the previously released track “World of Inconvenience”, and soulful singer-songwriter Meshell Ndegeocello.

“Fought the Line” (watch the video below) opens with a somber, melodic clean riff before introducing Sanders’ raspiness and a mid-tempo sludge groove. The creepy, script-flipping video speaks to the song’s heavy lyrical theme.

Regarding the track, Sanders says, “‘Fought the Line’ references struggle. It comes from a poem that I wrote inspired by a conversation I had with cancer itself. I stared at a face of beautiful, soft skin and assured this face, ‘I will take care of you.’ We’re fighting one battle together. I’m right there, if things fall into my hands. The verses were therapy venting my anger. When people are fighting for their lives, it’s very easy to go off the line. If death is reeling you in, then you have to fight and do anything in your power to overcome it. I just wanted to be there to support.”

Sanders revealed in October 2015 that his wife, Jeza, was diagnosed with breast cancer.

Dub Trio — comprised of Stu Brooks, DP Holmes, Joe Tomino — will be touring the East Coast in May, with more dates to be announced soon. See their current itinerary below, and pre-order The Shape of Dub to Come at this location.