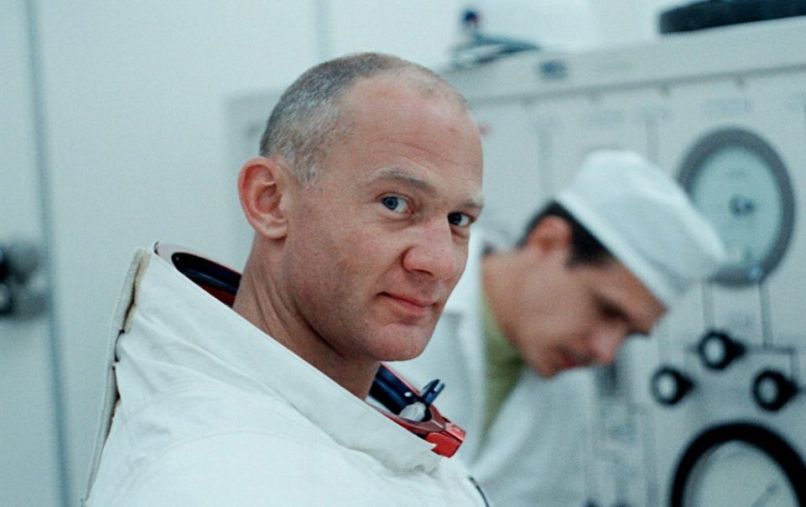 The Pitch: In the summer of ’69, three astronauts — Neil Armstrong, Edwin “Buzz” Aldrin, and Michael Collins — were sent on an eight-day mission to do what nobody had ever done before in the recorded history of mankind: put a human being on the surface of the moon. The culmination of a promise made by then-President John F. Kennedy to conquer the next nearest corner of the galaxy by the end of the decade, the mission saw hundreds upon hundreds of NASA engineers, scientists, and mathematicians collaborating in perfect tandem to hopefully get them there, and then bring them home. Cameras captured every nail-biting second of it, and Apollo 11 stages the resulting footage as a remarkable historical recreation, an immersive treatise on one of the greatest feats ever accomplished.

In Peace For All Mankind: The footage that director and editor Todd Douglas Miller has restored and assembled here distinguishes Apollo 11 as a transcendent documentary, a reconstruction of not just a mission but an entire moment in history, rendered so immediate that it’s as though it just took place yesterday.

It couldn’t have, however, because one of the things Apollo 11 captures best is the way in which an event as momentous as a trip to the moon was able to unify all people, and draw them to a singular moment of awe, in a way that today’s segmented world no longer frequently allows. Some of the most breathtaking footage on display here involves spanning, helicopter-shot tableaux of people crowded onto Florida piers and beaches, waiting to watch a miracle take place right in front of them. People crowd around radios, cars, blankets. The cinematographers on the scene peer into concession stands and bustling crowds, as strangers shy away from cameras instead of posing eagerly before them.

And when the mission begins, both the trio hurtling through the atmosphere and the millions watching at home are left in a suspended state of disbelief and anxiety, waiting to see if somehow, some way, Armstrong and Aldrin and Collins can actually pull it off. It’s an illustration of a point in time to which we’ll never return again, one in which the rush of discovery was shared, indisputable, and a force of unification and good. The world viewed in such breathtaking detail throughout Apollo 11 will never exist again, which makes its human portraiture throughout all the more affecting.

One Small Step For Man: Sure, we know that the Apollo 11 launch ended in something truly incredible. But what Apollo 11 makes clear, early and often, is how many times it came close to not getting off the ground at all. Less than three hours before the launch, a fuel leak was discovered, and the fevered effort to complete it is just one of several tense episodes the documentary captures with shocking clarity. At every phase of the mission was a meticulous, clockwork human effort, with an entire planet bound to their efforts all the while. An early shot lasting over a full minute simply rides an elevator up the side of the space shuttle, following higher and higher along until the horizon line disappears entirely. It’s a daunting reminder of not only what an incredible thing the early scientists of the space race were able to create, but just how much was waiting to go wrong at any given second.

Like First Man last year, Apollo 11 does a remarkable job of lending genuine alarm to one of the most famous stories in existence; where that film largely focused on the process leading up to the launch, however, Apollo 11 immerses itself in the particulars of the trip through space itself. One of the most impressive takeaways from the documentary is just how difficult their mission was at every step, how many different things had to be accomplished to perfection, and how close all three men were to being hurtled into the infinite abyss of space at any given second. To that end, Miller deploys some truly astounding footage, including images of the original lunar lander making its initial contact with the surface. (As much as anything, Apollo 11 feels like an incredibly stern rebuke to conspiracy theories about the reality of the moon landing. Miller even provides any remaining skeptics with frame-by-frame photography of Armstrong taking the very first recorded step.)

The miracle of the moon landing was its proof of humankind’s ability to push beyond the limitations of the planet, but Apollo 11 paints a deeply humane portrait of what happened before, during, and after they went there. It’ll make you reconsider the smaller things about the moon mission, the ones other retellings often sidestep. The way that Collins was left orbiting the surface of the moon by himself, waiting for Armstrong and Aldrin to return. The nights that Armstrong and Aldrin slept on the moon’s surface, staring back at the Earth all the while. The jokes cracked between ground control and the shuttle at every step. The way that Armstrong’s heart rate briefly spiked to 156 when his foot made contact with the powdery surface of the moon. And the way in which, when all three men returned to Earth, each was captured with an unreadable smile on their faces. Apollo 11 might be majestic in its imagery, but it also delivers a welcome focus on what it was for the people involved to experience something so profound that it would never be known that way, in quite the same way, ever again.

Beyond the Infinite: Through Miller’s clean construction, which mixes frantic split-screen editing with lingering gazes at some of the more memorable footage, Apollo 11 takes on the dramatic momentum of high drama without a single talking-head cutaway or flourish of narration. This is all visual assemblage, lent momentum by its own staggering clarity (much of the footage looks so crisp that it may as well have been shot digitally) and by Matt Morton’s triumphant score. Morton builds ominous synths to a triumphant crescendo, lending the real-life voyage the gravity of Keir Dullea crossing the point of no return in 2001: A Space Odyssey. It’s a fair comparison, as Apollo 11 lends the moon landing the same air of vivid discovery as any journey into the deepest reaches of the galaxy.

The Verdict: A good documentary offers a comprehensive portrait of its subject, but a great documentary eradicates the disconnect between audience and time period, making the events depicted feel as essential and important as the present. Apollo 11 is a great documentary, and its greatness can largely be attributed to the stunning archival scenes compiled within it. It’s impossible for anybody who wasn’t there to truly understand what it felt like to see Apollo 11 complete its travels, but for at least 93 endlessly arresting minutes, Apollo 11 does its very best to put you right there.

Where’s It Playing? IMAX theaters nationwide on March 1st for an exclusive week-long engagement; wider release March 8th. Pay the extra bucks for the biggest screen you can find, trust us.