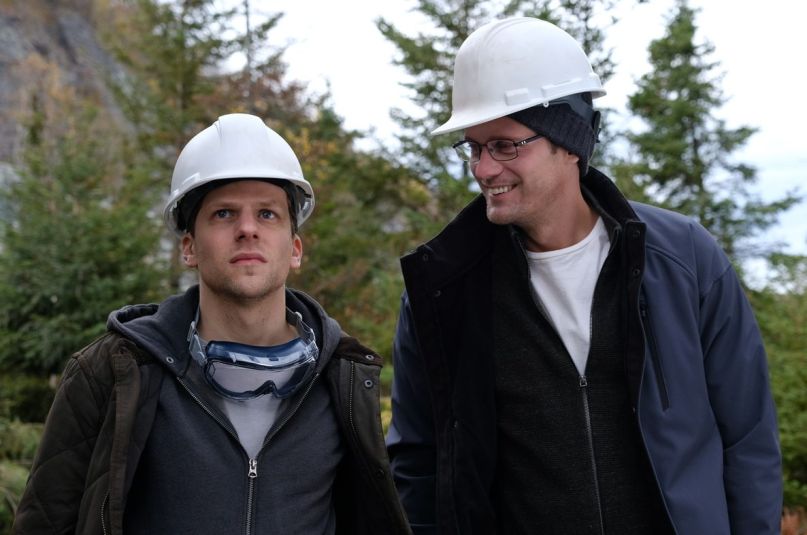 The Pitch: Sixteen milliseconds — that’s all the time it takes for a hummingbird to flap its wings. For Vincent (Jesse Eisenberg) and Anton Zaleski (Alexander Skarsgård), two cousins planning the greatest digital stock market gamble of all time, it’s the difference between getting rich quick and going to jail. Their ambitious, reckless plan: to lay a single stretch of fiber-optic cable between the Kansas and New York Stock Exchanges, making their clients able to trade a crucial millisecond faster than the competition. But as the pair run into every conceivable problem — medical issues, nervous investors, a former boss (Salma Hayek) who sniffs out their plan and wants to beat them to it — the project takes an unexpected toll on their health, their wealth, and their relationships with each other.

You Know the Drill: If you’ve seen The Social Network, you’ll largely recognize the direction Canadian writer-director Kim Nguyen is pursuing n The Hummingbird Project. Capitalist critiques in film are nothing new at this point — tortured visionaries undone by their own personality flaws, the ever-increasing pursuit of greed at the cost of one’s health and relationships. But Nguyen’s approach feels especially lifted from Fincher’s, right down to the slick, measured cinematography courtesy of Nicolas Bolduc (Enemy, Nguyen’s previous film War Witch). Hell, they even bring in Eisenberg for one of his characteristically nervous performances.

Admittedly, in their pursuit of Fincher-esque meticulousness, Nguyen and Bolduc craft some striking, if on-the-nose, images. Horizontal drills plow through muddy earth while a doctor weaves a fiber-optic camera down Vincent’s esophagus; Vincent awkwardly breaks down over the prospect of his impending death and the failure of his plans in the middle of a massage; the antiseptic offices of AAA data companies contrast with the dirt and overcast sky of the Appalachian mountains. The world of The Hummingbird Project is a wheat field slowly ground into flour by the mill of capitalism, and Bolduc’s artful framing is perhaps Nguyen’s most effective vehicle through which to tell the tale.

Playing Against Pipe: It’s strange enough to cast Jesse Eisenberg and Alexander Skarsgard as brothers; it’s even more bizarre to basically have them switch up their expected roles. In any other film, Eisenberg would be the socially awkward tech guy, Skarsgård the slick hustler chatting up investors and charming them to get what he wants. But here, the roles are reversed — Eisenberg plays Vincent with neurotic, fast-talking braggadocio, his pursed lips giving off the look of a man just barely holding it together at every conceivable moment. Meanwhile, Skarsgård adopts a bald cap and hunched posture as the withdrawn, uncool Anton, playing down to distract from the fact that he’s one of the most handsome people on the planet.

The switch works in some unexpected ways, the mere visual of the pair making it clear that they’re in over their heads. Even Skarsgård manages to pull out a wonderfully unnerving, darkly comic performance out of Anton’s collection of arch tics, culminating in a slow-motion celebratory dance in his bathrobe to the Beastie Boys when he finally cracks the algorithm.

But the film shines brightest (however briefly) when it pulls focus away from the brothers to follow Hayek’s calculating villain, a ruthless corporate exec who’ll stop at nothing to beat the brothers at their own game. With her shock of dyed white hair and intimidating power suits, Hayek certainly delivers some Devil Wears Prada vibes, even given the marble-mouthed technobabble the film leaves her to patter through. Nguyen’s script is full of the same, the dialogue clumsily pinballing between the logistics of high-frequency data algorithms and overwrought monologues about the quixotic nature of the brothers’ quest.

Deep In the Hole:The Hummingbird Project isn’t about two fictional brothers laying fiber-optic cable; it has Things to Say About Capitalism, and it’s committed to saying them in the most inelegant ways possible. At every turn, the Zaleski brothers are men undone by their own greed, wrapping their own sense of personal worth in an impossible project that only serves to make them even more money. Nguyen’s script warns that there’s more to life than money, as Anton begins to weigh the “epistemological questions” of supply-side economics after a waitress asks him what happens to the lemon farmers et al. from which his trading algorithm would help him profit. Early in the film, Vincent is diagnosed with terminal stomach cancer, for which he foregoes treatment because “I’m kind of in the middle of something right now”.

The Verdict: It’s handsome, well-intentioned, and pulls challenging performances out of its three leads, but The Hummingbird Project is a surface-level capitalist critique that deals far too obviously with its subjects. While treating entrepreneurism like a classic Greek tragedy isn’t a bad idea in theory, Nguyen’s script is more than a little clunky, and the imagery nakedly self-serving. It’s a film about two people digging a hole so they can make ten more dollars per transaction, no matter how handsomely it’s presented.

Where’s It Playing?: The Hummingbird Project is currently playing in local theaters and DSA meetings everywhere.