Film Review: Jordan Peele’s Us Is Effective Horror That Buckles Under Its Own Ambition 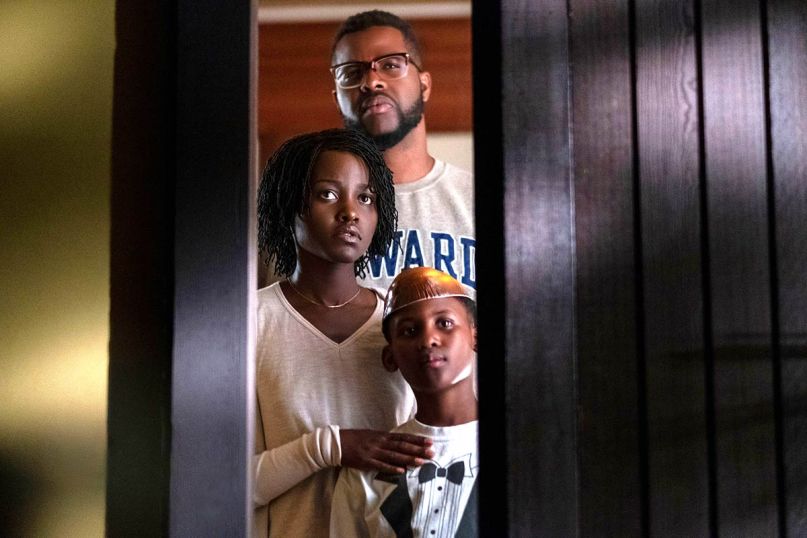 The Pitch: In the briefest of sentences, the four members of the Wilson family (mother Lupita Nyong’o, father Winston Duke, daughter Shahadi Wright Joseph, and son Evan Alex) have to contend with a quartet of doppelgängers — or “shadows” — who invade their vacation home in Santa Cruz. Revealing anything more would mean encroaching into spoiler territory, so let’s just say that the less you know about screenwriter/director Jordan Peele’s followup to Get Out, the better. (Note: You might want to stop reading now, on that same basis).

Bigger, Bolder, Bloodier: While Peele has remained secretive about the nitty-gritty plot details and world-building in Us, he’s been upfront about wanting to create something more firmly rooted in horror than its predecessor. For all its strengths, Get Out was more frightening in its theme and its cultural and sociopolitical observations than in the actual scares. Us keeps a keener eye on the throat, its genre setpieces more guttural and external. Blunt household objects become weapons, blood sprays across the screen in uncontrollable jets, villains go feral in both demeanor and their acts of violence. There are creepy masks, creepy animals, creepy makeup effects. Simply put, this is a bigger, bolder, undeniably horror-minded movie.

Shadows of the Past: As such, well-read gorehounds will spot a litany of homages to horror cinema of the past. From Alex’s Jaws shirt and Wolfman mask to the same Santa Cruz boardwalk setting as The Lost Boys, Peele seems more comfortable with paying tribute to pioneering genre films. And because he’s already a pioneer himself, he gets away with it. That’s not to say that a nod to the opening car shots of The Shining would automatically be a flaw in a lesser filmmaker’s work. But so often, horror movies are nothing but homages, and that kind of sucks the fun out of them. Peele, on the other hand, paints Easter eggs that actually work due to his ultimate subversion of the source material. It might be far from perfect, but Us never feels quite like any other horror movie out there.

The Craft: Even when Us sags under its own ambition (more on that in a bit), the film looks, sounds, and feels dangerous and dazzling. Peele manages to depict every elaborate action sequence with crispness rather than nauseating camerawork, and each actor has a blast getting to play a more twisted version of themselves — their two halves often beating, stabbing, and choking the shit out of each other across a single scene.

It’s more nuanced than it sounds. This isn’t just about putting on a creepy face, or hunching over and running fast. Because Peele’s doppelgängers are essentially human beings with all of the primal instincts but none of the soul, each performer has to rely on cold imitation in addition to animalistic malice. How does one show how painful it is to try and replicate another person? And how do they do it with a sparse toolkit of grunts, labored breathing, and half-formed dialogue? Watch the Wilson family to find out. And that’s to say nothing of how well they expand their more humanistic archetypes of corny dad, guarded mom, horror-obsessed son, and socially disaffected daughter.

Even the soundtrack mirrors the script’s central conceit of doppelgängers. Just as the antagonists are darker, severely askew riffs on the main characters, a handful of popular songs become more sinister, innocent, or just plain funny depending on their context. In one scene, The Beach Boys’ “Good Vibrations” functions as background noise for a character at home. In another, the same song becomes a kind of sped-up death waltz. N.W.A.’s “Fuck the Police” gets played for both comic relief and dramatic irony, and Luniz’s “I Got 5 On It” becomes Us‘ unexpected theme as both nostalgic road-trip music and a relentless sonic landscape for the film’s climax.

Scope Creep: For much of Us, Peele keeps his focus tight, honing in on the Wilson family and their neighbors (Elizabeth Moss and Tim Heidecker) in their respective houses. Such close quarters make it all feel like an extremely bizarre home-invasion thriller. In keeping with the spirit of minimalism, the only explanation we’re given about the doppelgängers arrives via a brief monologue from Nyong’o’s other.

In a perfect world, that’s all we would ever get in the way of exposition. But as the film progresses, so does Peele’s ambition. Soon enough, we’re saddled with an entire backstory for the villains — one that has more epic implications than anyone could have ever imagined, including the audience. While it’s admirable for a pressurized horror movie to pivot to such grand plans, it also introduces a whole slate of brand-new questions. And because Peele goes to such great lengths to explain the doppelgängers’ history when he doesn’t have to, it feels off that so much else stays shrouded in mystery.

Early on, Nyong’o’s shadow refers to her kind as “Americans”. That’s one hell of a bomb to drop with no real follow-up. On the surface, the concept of everyday citizens and their doppelgängers implies that America has a dark underbelly (which it certainly does). But is that all that interesting of a message? If there’s more there, it never feels like Peele fully explores it.

The Verdict: There’s no denying the craftsmanship or the singular voice that’s on display in Us. And yet there’s also no denying its messiness, which expands outward as the film moves farther and farther from its claustrophobic locale. Exciting? Sure. Unique? Without a doubt. But it’s hard to not feel frustrated by a script that never seems to figure out what it’s trying to say.

Where’s It Playing? Us hits theaters on March 22nd.