Jason Lee's character from Mallrats makes a reference to the reference 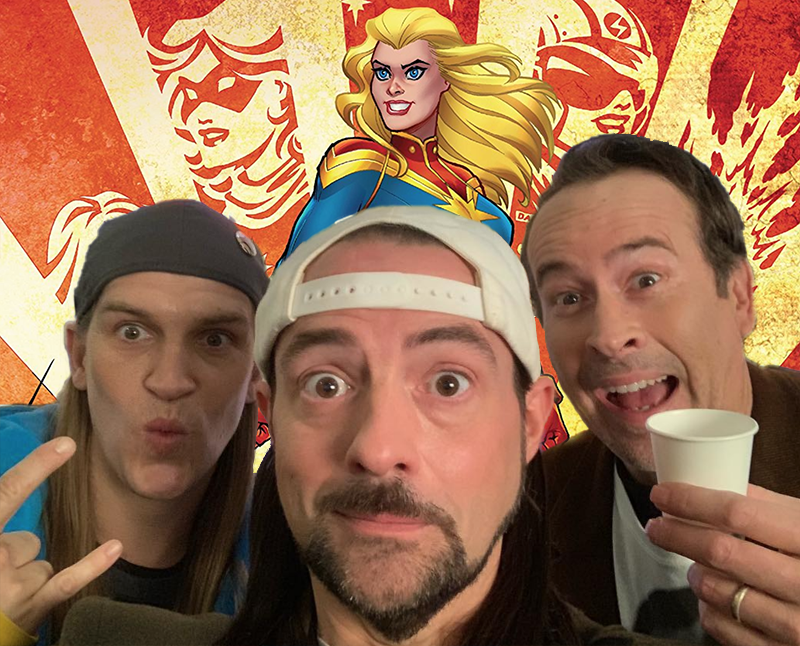 Kevin Smith has been gleefully updating fans on the filming of Jay and Silent Bob Reboot with a constant torrent of Instagram posts. He’s confirmed appearances from Method Man and Redman, Molly Shannon, Kate Micucci, WWE star Chris Jericho, Craig Robinson, Justin Long, Joe Manganiello, and many more familiar View Askew faces. In his latest post, the writer/director revealed another cameo, this one being a sweet reference to a reference from another geeky film, Captain Marvel.

*Spoiler alert* for those who haven’t seen Marvel’s latest superhero blockbuster, so turn back now.

Before he passed away, Stan Lee filmed a handful of cameos for forthcoming Marvel Cinematic Universe productions, including Captain Marvel. His appearance comes as Brie Larson’s Vers is hunting a Skrull on the LA Metro. She comes across someone seemingly hiding behind a big, red script, which she pulls down to reveal Stan the Man. The script he’s reading is for Smith’s Mallrats, the filmmaker’s 1995 feature in which Lee cameos as himself to give advice to Jason Lee’s comic obsessed Brodie Bruce. (Captain Marvel takes place in the summer of ’95.)

(Read: Every Stan Lee Cameo in the Marvel Cinematic Universe)

Smith was clearly touched by the nod, posting a tearful Insta acknowledgement. (This all despite the reality conundrums his inclusion in the Marvel Cinematic Universe presents, like how can a movie that references characters like Hulk and Spider-Man exist in a world where those characters are real, but haven’t even come on the scene yet? But I digress…) Then, today, he shared another shot from the set, repaying Marvel’s favor with a nod of his own. The still sees Lee’s Brodie picking up a fresh copy of the latest Captain Marvel #1, completing the referential circle in perfectly nerdy fashion.

(Read: Every Kevin Smith Movie From Worst to Best)

See the post below. Jay and Silent Bob Reboot, which finds the title characters reliving the plot of Jay and Silent Bob Strike Back when they head to Hollywood to stop a reboot of Bluntman and Chronic, is expected as early as the end of the year.

Just saw @captainmarvelofficial. I am a blubbering mess. After a lifetime spent referencing the movies, the movies just referenced me! Many thanks to @marvelstudios, #ryanfleck, #annabodin, and to my friend @therealstanlee for the cinematic shout-out! But if I’m now part of the @marvel Universe, I have only one question: Did I survive The Snap? #KevinSmith #captainmarvel #marveluniverse #marvel #marvelstudios #gratitude #kevinfeige #ryanfleck #annaboden