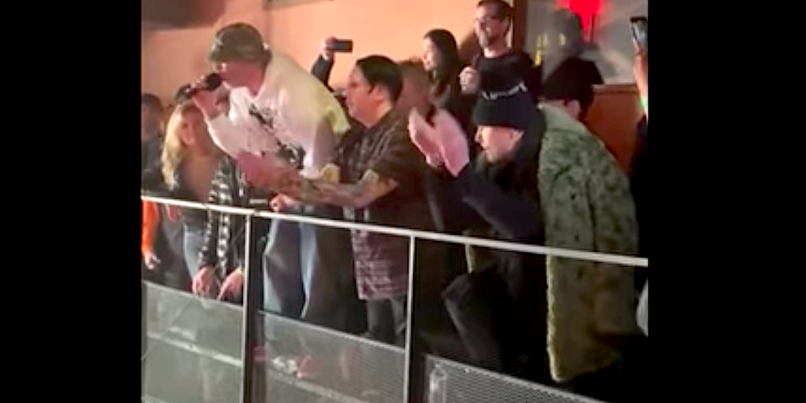 Last week, Limp Bizkit advertised a “Three Dollar Show Y’all” at the Troubadour in Los Angeles featuring the “original lineup”, and the bargain-priced gig turned out to be a who’s who gathering of iconic ’90s rock figures.

The $3 concert took place Tuesday night (March 5th), and the “original lineup” aspect of the show turned out to be the return of bassist Sam Rivers, who had taken hiatus from the band beginning in 2015 after being diagnosed with degenerative disease of the discs of the spine.


At one point during the show, Bizkit performed “My Generation” with rapper Machine Gun Kelly, who along with Bizkit singer Fred Durst whipped the crowd into a pogoing frenzy. Fans can next catch MGK playing Mötley Crüe’s Tommy Lee in the biopic The Dirt, hitting Netflix later this month.

Manson, who broke out an umbrella with an image of a hand flipping the bird, can be seen on fan-filmed video alongside Durst joining in on “My Way” and a cover of the Nirvana classic “Heart-Shaped Box”. Making things easier for Manson, Bizkit were rolling karaoke-style lyrics behind them onstage.

If that isn’t enough to blow your mind, Bizkit broke out a medley of Journey’s “Don’t Stop Believin'”, Green Day’s “Brain Stew”, Pantera’s “Mouth for War” and Metallica’s “For Whom the Bell Tolls”, all leading up to their career-launching cover of George Michael’s “Faith”.

Other celebs reported to be at the show were Suicidal Tendencies leader Mike Muir and Fight Club director David Fincher.

Bizkit are currently working on their follow-up to 2011’s Gold Cobra. As of now, there’s no release date set for the new disc, which carries the tentative title Stampede of the Disco Elephants, but you can catch up on the band’s music by picking up vinyl at Reverb LP.

Check out fan-filmed video of the $3 show below, as well as the complete setlist.

this 3 dollar show far exceeded my expectations… the band covered heart shaped box while fred sang it with marilyn manson as billy corgan and mike muir watched… also david fincher was sitting behind me. #LimpBizkit #Art

Setlist:
Show Me What You Got
Hot Dog
Rollin’ (Air Raid Vehicle)
My Generation
Livin’ It Up
My Way
Heart-Shaped Box (partial Nirvana cover)
Nookie
Full Nelson
Pollution (with a fan on vocals)
Eat You Alive
Boiler
Behind Blue Eyes (The Who cover)
Don’t Stop Believin’/ Brain Stew/ Mouth For War/ For Whom The Bell Tolls” (medley)
Faith (George Michael cover)
Break Stuff
Take a Look Around