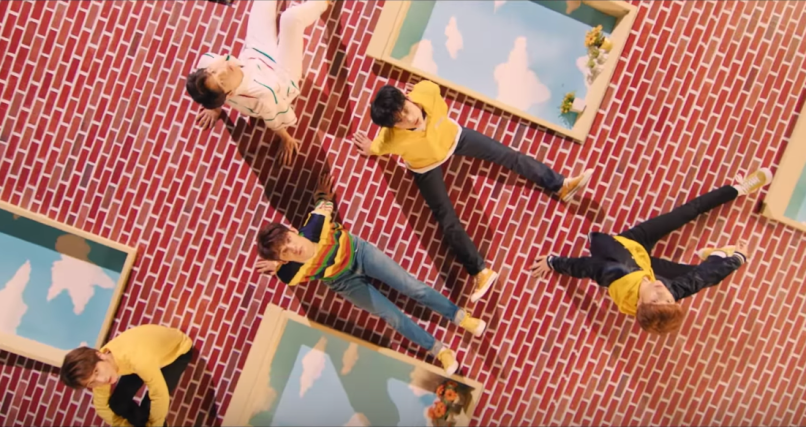 TOMORROW X TOGETHER are the latest brainchild of Big Hit Entertainment, the South Korean company behind international K-pop phenom BTS. This new group (pronounced “tomorrow by together” and abbreviated as “TXT”) are gearing up for their own meteoric rise to fame with the release of their debut album, The Dream Chapter: Star, and their first single and music video, “Crown”.

The boy band sports five teenaged members — Soobin, Yeonjun, Beomgyu, Taehyun, and Hueningkai — ranging from 16 to 19 years old. Much like their BTS counterparts, Big Hit Entertainment has crafted both group and individual storylines to draw in fans, with TXT’s narrative revolving around “gather[ing] together under ONE DREAM” and “transition[ing] from childhood to youth.” However, the five singers are also differentiated with distinct personalities and, so to speak, “flavors,” drawing on classic tropes to set them apart.

“Crown” is TOMORROW X TOGETHER’s first musical introduction to viewers, following up a series of short intro videos for the boys in the beginning of the year; before their official debut today, the group accumulated over 61 million YouTube views with these brief clips. The newest single is a typical K-pop song with its earworm-esque hooks, sugary-sweet backing vocals, and mixture of lyrics in Korean and English. With its music video, the pop act shows off their dancing skills as well — a hallmark of any true boy band — with tight choreography juxtaposed with whimsical imagery and animations. Check it out below.

The song marks the first single off The Dream Chapter: Star. TXT’s debut album features five tracks, each designed to show off the sonic versatility of the quintet. “Crown”, “Blue Orangeade”, and “Our Summer”, the latter which was produced by famed production duo, The Futuristics, highlight pop-leaning sensibilities, while “Cat & Dog” leans in a more hip-hop direction, complete with a mumble rap verse. A delicate and sentimental soft rock tune called “Nap of a star” closes the collection.

Stream the full album and check out is tracklist and artwork.