"It is an embarrassment to our Nation!" 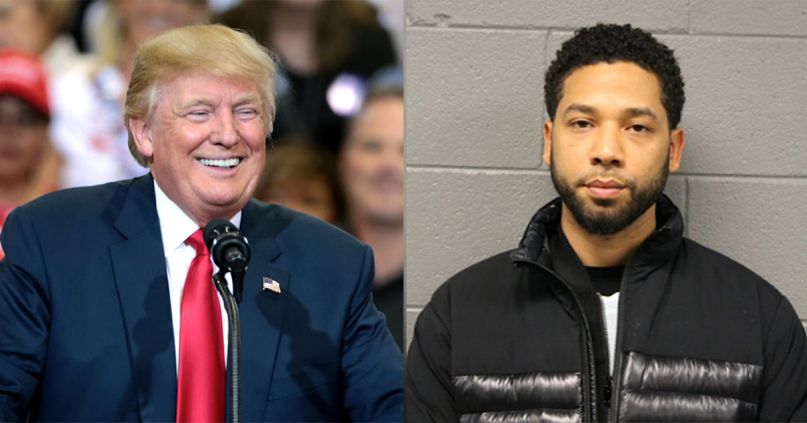 The decision by Chicago prosecutors to drop all charges against Jussie Smollett has elicited bipartisan outrage. Chicago’s Democratic mayor, Rahm Emanuel, characterized the Cook County’s State’s Attorney’s actions as “a whitewash of justice.” Now, Donald Trump has announced that the US Justice Department will “review” the case.

“FBI & DOJ to review the outrageous Jussie Smollett case in Chicago,” Trump wrote in an early morning tweet on Thursday, adding, “It is an embarrassment to our Nation!”

Of course, the Smollett case hits particularly close to home for Trump and his supporters, as the Empire actor has alleged that he was attacked by two white men wearing MAGA hats.

FBI & DOJ to review the outrageous Jussie Smollett case in Chicago. It is an embarrassment to our Nation!

In March, the 36-year-old Smollett was indicted on 16 counts of disorderly conduct relating to allegations that he lied to police about being the victim of a hate crime. Following a lengthy investigation, Chicago police concluded that Smollett orchestrated his own attack in an effort to increase his notoriety in the entertainment industry and secure a larger salary on Empire.

However, on Tuesday, prosecutors made a stunning about-face, agreeing to drop all charges against Smollett in exchange for community service and the forfeiture of his $10,000 bond. “We believe this outcome is a just disposition and appropriate resolution to this case,” the Cook County’s State’s Attorney’s office said in a statement.

In a subsequent interview with The Chicago Sun-Times, Cook County State’s Attorney Kim Foxx said her office would have been successful in convicting Smollett. However, she maintained that the penalty for such a crime was always going to be limited. “Someone with no background on a Class 4 felony, we’re not getting any prison time no matter how notorious the case,” Foxx explained. “What we know is, he was not going to prison… he was going to get probation or community service.”

“The notion that this somehow exonerates him or that the prosecutors somehow believed he was innocent is very frustrating to [my] idea of alternative prosecution,” Fox told The Chicago Sun-Times. “But I understand that [Smollett’s lawyers] have a client, and they have a spin.”