TV Review: Veep Kicks Off Its Seventh and Final Season in Familiar Fashion 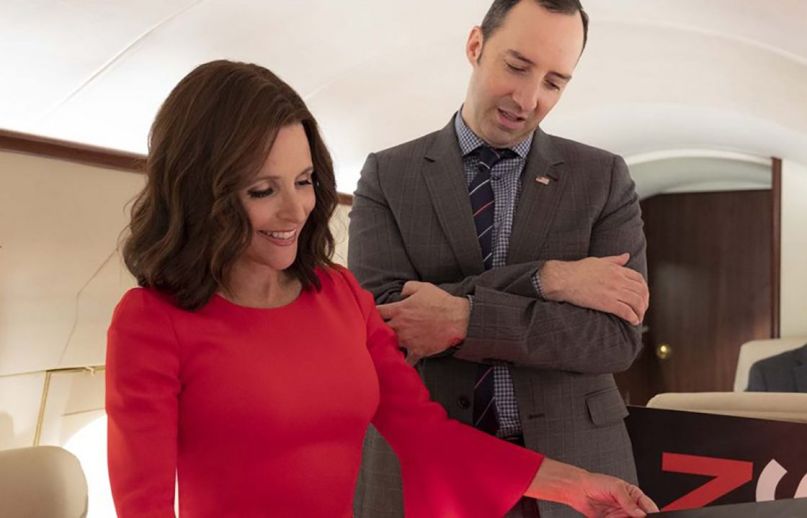 The Pitch: It’s time for a “New Selina Now,” as America’s favorite foul-mouthed ex-Vice President (Julia Louis-Dreyfus) makes her bid to stay in the Oval Office for a term longer than the average celebrity marriage. Along the way, she has to combat some new foes and familiar faces, including the deplorable extraordinaire himself, Jonah Ryan (Timothy Simons). Her old staff is along for the ride, with their mercenary schemes and acid-tongued repartee still out in full force. As Veep kicks off its seventh and final season, it promises a heap of the show’s usual pointed political pugilism, as Selina and company rumble through Iowa and New Hampshire in an effort to woo voters and sate their own egos and ambitions.

Maybe Baby: One of the most interesting threads of season 7 has next to nothing to do with the campaign trail. Picking things up from last season’s tease, Amy (Anna Chlumsky) is trying to figure out what to do about her pregnancy, and about Dan (Reid Scott). The show doesn’t take either decision lightly, while still managing to find the humor and sense of uncertainty in each. One of Veep’s strengths is walking the line between the frank and the funny, and Amy’s hopes and anxieties and frustrations (combined with Selina’s usual less-than-benign neglect) gives the show plenty of material on both fronts. While the series seems more invested in her and Dan’s fate as a couple than might be necessary, season 7 nevertheless delivers the blue-streaked comedy the show for which the show is known, while taking Amy’s position and exasperation seriously. It’s a difficult balance to strike.

Because It’s There: In Veep’s earlier years, it leaned hard on its sharp-tongued brand of comedy, failed Machiavellian plots, and cynical political perspectives, leaving any sympathy or sentiment at the bottom of the swear jar. But one of the most meaningful changes in the back half of the series has been its ability to find notes of real (albeit sometimes uncomfortable) humanity in its otherwise crude and craven cast of characters.

Season 7 follows that same approach, and the early returns are positive. One of the season’s ongoing motifs involves Selina trying to wear the mask of the perfect candidate on-camera, while also indulging in her usual self-centered ways away from it. But in the occasional revealing moment, when challenged to confront why she wants to be president, Selina unveils a deeply-felt sense of grievance about what this country “owes” her. A calculated but intense conversation about what her life might look like away from politics contains a dose of the series’s usual cynicism, but also some earned and palpable pathos. And when her schemes fall to ruin (as they inevitably must given the show’s ethos), what gives Selina a foothold in the Presidential race is her sincerely-expressed frustration with the younger generation. For a character who started off as the poster child for jaded, unscrupulous political gamesmanship, season 7 continues to delve into the “why” of Selina with aplomb and intrigue.

The Jonad Files: While the show ventures into legitimate pathos elsewhere, Jonah’s portion of the show is, as usual, pure comedy. As the Dwight Schrute of Veep, the character’s complete lack of self-awareness and/or understanding about how to act like a normal human being leads to plenty of laughs when he’s put under the spotlight of a Presidential campaign. Whether it’s a strange family relationship that Jonah doesn’t fully understand, or a needle-threading riff on an obverse version of the #MeToo movement, or Jonah’s inability to master even a scintilla of political correctness, the season wrings all kinds of hysterical material from the series’ resident doofus. More than anywhere else on the show, Veep uses Jonah as a means to comment on the absurdities of the current administration, and has plenty of comic success poking fun at the oddball undercard of Presidential primaries.

The Verdict: If you’ve enjoyed the prior six seasons of Veep, you’re going to enjoy this one. While the campaign folderol makes for a soft reset of the show, and the usual cast of characters face a set of semi-new obstacles, the standard rhythms of the series remain undisturbed. Selina still concocts half-thought-out plans in an effort to gain the upper hand, only to be thwarted by some measure of self-sabotage or incompetence. The rest of her staff still scrambles to execute, counter-act, or mop up whatever’s left from each week’s craziness. And all the while, these high and low points are still laced with some of the most profane, rapid-fire, and hilarious barbs and put-downs the world’s ever known. As the acknowledged hollowness of the Meyer campaign’s “New Selina Now” motto portends, the formula hasn’t changed all that much.

But that’s a good thing! There are hints of Veep using its final season to deliver a last word on Selina Meyer, to bring Amy’s series-length character arc to a close, and to have Jonah’s insanity reach its baffling apex. For the most part, though, season 7 offers the same insult-slinging, ladder-climbing, sharp-elbowed comedy that fans have enjoyed for the last six years. The writing continues to be crisp, the humor remains potent, and a recovering Julia Louis-Dreyfus hasn’t missed a beat. Time will tell whether Selina Meyer’s final charge leads to the office she’s been lusting after since day one, or delivers another twisting, withering defeat. But either way, there are still plenty of blackly comic chuckles to be had before Veep lets its balloons drop one last time.