"You might be a king or a little street sweeper, but sooner or later you dance with the reaper." 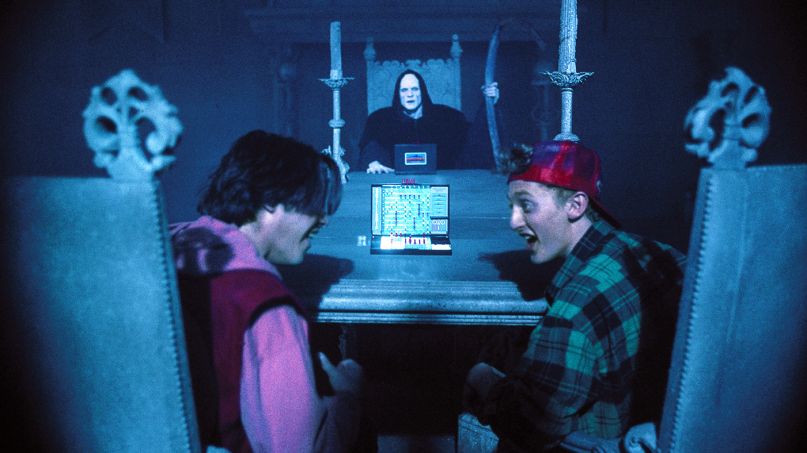 Last week, both Keanu Reeves and Alex Winter confirmed that Bill & Ted 3: Face the Music is officially in production for an August 21st, 2020 release. What’s more, screenwriter Ed Soloman teased that the next adventure would have some “delicious cameos.”

Well, now we know one of them, as the film’s official Twitter account announced today that William Sadler’s friendly, board game-loving Grim Reaper will be along for the journey. If you recall, Sadler appeared in the series’ 1991 sequel, Bill and Ted’s Bogus Adventure.

Seeing how the two titular heroes met Sadler’s Reaper after being sent into Hell — a sequence that has haunted this writer since age six — one has to wonder what his cameo suggests for the latest chapter. Will they go back to Satan’s chambers? Hope not.

Consult the official synopsis below to start theorizing:

“Following 1989’s Bill & Ted’s Excellent Adventure and 1991’s Bill & Ted’s Bogus Journey, the stakes are higher than ever for William “Bill” S. Preston Esq. (Winter) and Theodore “Ted” Logan (Reeves). Yet to fulfill their rock and roll destiny, the now middle-aged best friends set out on a new adventure, when a visitor from the future warns them that only their song can save life as we know it and bring harmony to the universe.  Along the way, they will be helped by their families, old friends and a few music legends.”

Dean Parisot (Galaxy Quest, Red 2, Fun with Dick and Jane) directs the film from a script penned by original writers Soloman and Chris Matheson. In addition Sadler, there will be an appearance from George Carlin’s Rufus, despite the actor/comedian’s passing in 2008.

For those who have been asking, @Wm_Sadler will totally be reprising his role! pic.twitter.com/jPDZyseotu