IX Takeaways From Star Wars: The Rise of Skywalker’s Trailer

As we expected from JJ Abrams, the questions are strong with his latest trailer

by Michael Roffman and Cap Blackard 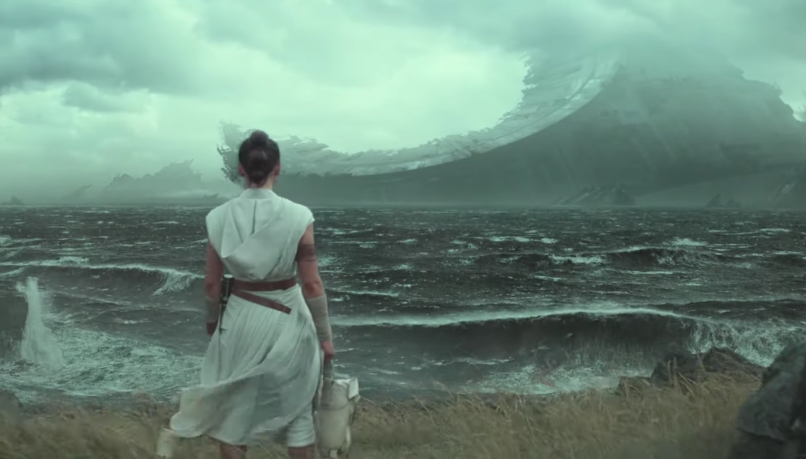 Daisy Ridley in Star Wars: The Rise of Skywalker

Well, that’s that, the final Star Wars teaser trailer of the Skywalker saga. As expected, we have questions, but we were always going to have questions. This is JJ Abrams, after all, one of the very few creators in Hollywood who still prioritize mystery.

However, with Episode IX being the final chapter of a saga that stretches decades, there’s an added gravitas to these questions. Because really, anything goes now, and as we heard in those final seconds, everything’s also on the table. We must be cautious.

Cautious and yet open to the possibilities. Again, this is the culmination of George Lucas’ entire Skywalker legacy, as Lucasfilm President Kathleen Kennedy told everyone at Star Wars Celebration, and that’s an unenviable task that demands ambitious thinking.

Keep that in mind as you read our IX takeaways for Episode IX. (Get it?) It’s going to be a long journey to The Rise of Skywalker, a title that will haunt us until we truly know what the hell it means on December 20th. Until then, it doesn’t hurt to ask a few questions.

Both Abrams and Kennedy were insistent that this next chapter was going to be a team effort, and the trailer suggests as much. While we definitely get an idea on some factions going down, be it Poe and Finn running the gauntlet on the Jabba-esque skiff or Rey in the sand dunes by her lonesome, there are some essential scenes with the whole gang in tow. Particularly, you know, the lot of them heading towards a sunken Death Star. –Michael Roffman

VIII. So… Which Death Star is That?

Rey, Fin, Poe, Chewie, 3-PO, BB-8, and the new wheelie droid discover a healthy slice of Death Star poking up from an unknown world’s ocean. But which Death Star is it? Based on how intact it is and speculating on the size of the planet and ocean they’re on … it’s got to be the first Death Star from the Battle of Yavin, as the second Death Star was many times larger than the first.

But hey, wait a minute,  how the heck is there that big a chunk of this battle station left? That explosion was massive and seemingly atomized everything. Were the Ewoks worried about debris hitting their planet when they were partying? Nope! But the new trailer cuts from the Death Star to Emperor Palpatine’s laugh implying maybe it is the second one in spite of all the factors suggesting it shouldn’t be. Is this common sense thrown out the window?! #FalseFlagOperation #DeathStarTrussMeltsEndorCrust

…Though perhaps… there is another…

In an early draft for Return of the Jedi, two Death Stars orbited Coruscant, so maybe, just maybe there were more than two Giant Hurt Balls out there. No matter the case, unless it’s a spare Vader cape or a massive chunk of kyber crystal, one wonders what would bring our heroes to that desolate place. One guess stems back to original artwork for The Force Awakens (see below) in which an early version of Rey explores the ruins of the Death Star underwater. So, Rey could be going for a swim…

VII. You’re My Only Hope (Again)

We’ve known for some time now that Abrams planned on using deleted footage from The Force Awakens to bring back Princess Leia for a final sendoff. Based on the quick snapshot we get in the trailer, Leia and Rey’s tearful embrace looks oddly familiar to their final moments in the 2015 chapter.

It’s very possible that an extended version of this scene was shot. In the novelization for The Force Awakens, the two have a much more elaborate conversation, which would make sense, seeing how Han Solo, a franchise great, had just passed away. Here’s what the novel has:

“I’m proud of what you’re about to do,” she told the girl. Rey replied in all seriousness. “But you’re also afraid. In sending me away, you’re—reminded.” Leia straightened. “You won’t share the fate of our son.” “I know what we’re doing is right. This is how it has to be. This is how it should be.” Leia smiled gently, reassuringly. “I know it, too. May the Force be with you.”

All of that is vague, albeit incredibly emotional, enough to apply towards the ensuing events that Rey will experience in Episode IX, don’t you think? That’s not all. The trailer also features a shot of Leia holding one of the ceremonial medallions at the end of A New Hope. Is it Luke’s? Or Han’s? We’ll find out, of course, but it wouldn’t be the first time Leia was given trinkets of the past (see: the ending of The Last Jedi). –Michael Roffman

There’s a startling number of visuals that seemingly contradict events that happened in The Last Jedi. The most obvious being that Luke’s saber appears to be intact, while Kylo Ren is seemingly refashioning his helmet. Both were destroyed in the previous chapter in largely anthemic visual metaphors that doubled-down on Johnson’s insistence to “kill the past.” So, has Abrams been listening to R.E.M.’s Collapse Into Now? Is he going to walk it back? It’s possible. Then again, Rey could simply be having a Force Dream, which would explain the all-too-surreal, Battlefront-esque TIE Fighter duel, and someone else could be fixing his helmet? It’s worth thinking about. –Michael Roffman

It’s a thrilling thing to see Lando Calrissian behind the stick of The Millennium Falcon again. But, with the added context of the amazing (and wrongly dismissed) Solo: A Star Wars Story, we now know how deep the emotional ties of Lando and The Falcon really go. This isn’t just “his ship” in a property possession sense – it’s literally an old friend.

Before Han and Lando were fast frenemies, Lando’s partner in daring-do (and romance too) was the sarcastic droid, L3-37. After succumbing to fatal damage while escaping Kessel, L3’s consciousness was uploaded into the ship’s navigational system, resulting in The Falcon’s computer having, as 3PO put it, a “most peculiar dialect.”

Lando and L3 have been apart a long time (with occasional reunions) but now that Han’s long gone, and we have deeper meaning to apply to Lando’s bond with the “fastest ship in the galaxy”; there’s an extra thrill that only the expanded universe can deliver. The joy on Calrissian’s face as he and Chewie take their old friend into hyperspace for what’s likely to be the last time … is a beautiful thing indeed. –Cap Blackard

Say what you will about The Last Jedi, but most, if not everyone, can agree that Johnson’s direction upgraded the look and style of the franchise considerably. That first ending in the throne room? Incredible! A spectacle unto itself. Now, Abrams said himself that he’s still editing the damn thing, which makes sense given that principal photography only wrapped this past February, but he clearly had those red trees in mind. That tracking shot with Kylo Ren pummeling down some sad bastard in the forest quells any fears that this movie won’t be any short of devastatingly beautiful. –Michael Roffman

Like any good Star Wars movie, these battles are taking place on the far reaches of the galaxy rather than major city centers or core planets. In fact, the most civilization we see comes in the form of a craft descending through heavy clouds towards a city atop a series of geological formations. This place is lit up cheerfully at night, but in a way that might suggest it’s not a particularly machine-oriented sci-fi city. If anything, it looks like the terrain might be heavily forested? Even snowy? Keep in mind, we also see some similar trees in the aforementioned shot where Kylo Ren takes down a person with his saber. Though these two shots are miles apart, it could be the same place. –Cap Blackard

II. The Emperor Strikes Back

Bringing Palpy “back” in any kind of real way seems like a big mistake. That doesn’t rule it out — Star Wars is full of big mistakes.  However, there are some interesting possible explanations for Darth Sidious making a reprisal in this final chapter.

Perhaps Palpatine will return as a Force ghost. “But only wielders of the lightside get to be Force entities,” you might say. Well, not exactly. Qui-Gon was something of a “grey Jedi”. He was also the first Jedi to become a Force ghost, and as a ghost taught the concept to a still-living Obi-Wan.

Qui-Gon was very interested into the prophesied “balance” of the Force and this put him at odds with the so-good-they’re-not-fun Jedi Order. This balance and subverting the notions of light and dark was a key part of The Last Jedi and Star Wars Rebels — unless that train has derailed this is the story where a final statement is made about the prophecy, the balance, all of it.

“We’ll always be with you – no one’s ever really gone,” says Luke in the trailer, leading into the laugh that puts the “boo” in “Naboo”. So let’s dissect that. Luke is now a Force ghost, and he says “we” — so that’s gotta be Yoda, Qui-Gon, Obi-Wan, and Anakin at least all batting in Rey’s corner against… a literal spectre from the past, and arguably the most mystically powerful darkside wielder in current cannon: Palpatine.

On the other hand, in the famous Dark Empire comic series, Palpatine cloned himself (younger, hunkier) and briefly turned Luke to the dark side. Perhaps they’ll take a literal page from the now non-canonical storyline and offer a different cloning situation: Rey. Palpatine could be a ghost, haunting her bloodline as at least a partial clone of the Emperor mixed with… Anakin? Luke? Eh, it’s a stretch. But this is the finale of a space opera – it’s prime time for some shocking paternity tests. –Cap Blackard

I. Which Skywalker is Rising?

This one’s less of a takeaway and more of a meditation on a number of thoughts.

First, let’s stop embracing the obvious red herring and agree that Rey is not a Skywalker. This is one thing that Abrams can’t walk back from in The Last Jedi. There was too much ceremony wired into that discovery — even if it was really just a subversion of Luke’s own revelation in Empire Strikes Back — and it would be “all too easy” to disregard.

“But Kylo is a Skywalker!” True, but that would also be cheap. That’s not to say it wouldn’t work. If anything, having a redemptive conclusion for Kylo would do two things: a.) be a familiar echo of Anakin’s own arc (and this franchise loves echoes) and b.) serve as a bookend for everything Han and Leia set out to do in The Force Awakens. Eh, too old hat.

What would be far more interesting is if the “Skywalker” refers to an entity as opposed to a person. In other words, what if the Skywalker were the new Jedi? It’s an idea that’s been tossed around Twitter, and certainly one that holds weight. It would not only align with Johnson’s insistence to break away from the past, but also respect it as you forge ahead.

If anything, that’s the only direction to go at this point, seeing how both sides of the Force were in agreement that change was imperative. Kylo Ren, Luke, and even Yoda were all adamant on the past being the past. It’s the future that they all want, and that future is now a battle of wills between a true Skywalker in Kylo and a disciple of Skywalker in Rey.