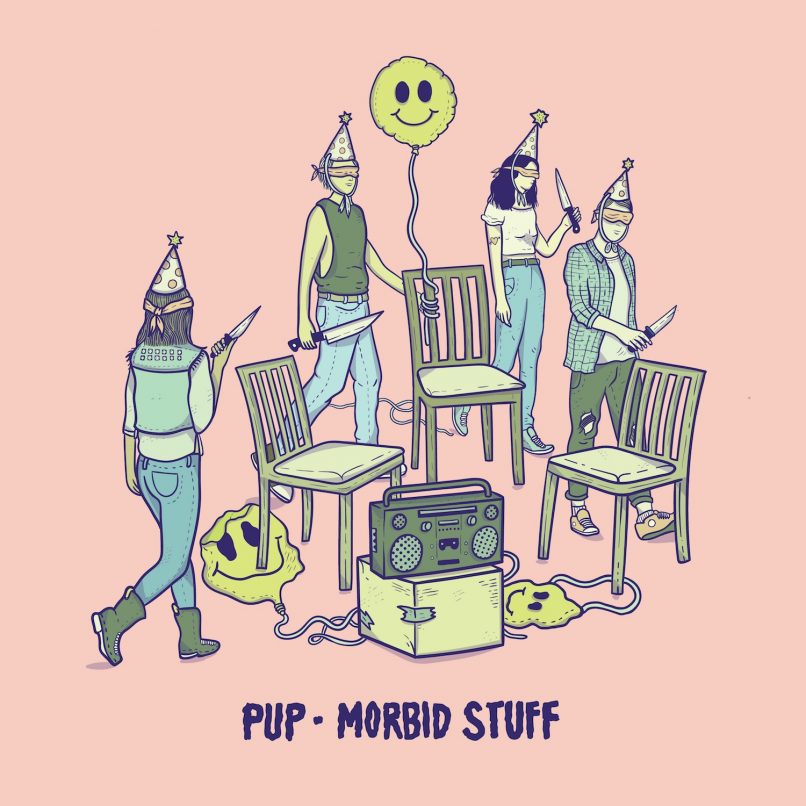 The Lowdown: The 2018 documentary film Minding the Gap tells the story of three young skateboarders from Rockford, IL, a city beset by high unemployment and crime. Each of the men grew up in abusive households, and over a period of years, the documentary tracks them as they mature, move from job to job, and either break or perpetuate the cycles they were raised in. The men in the film are fans of bands like Foxing and The World Is a Beautiful Place and I Am No Longer Afraid to Die, so it’s not a stretch to think they might listen to PUP, the raucous punk group from Toronto, shouting along to the passionate hooks and watching their inventive music videos. PUP’s third album, Morbid Stuff, feels like the soundtrack to their lives, songs about surviving layoffs and dead-end jobs, coping with depression, and being filled with constant confusion and rage while trying to navigate the calamity of modern life.

The Good: In an interview with Now Toronto, Stefan Babcock explained that the central conflict of Morbid Stuff was trying to write openly about his struggles with depression without fetishizing the tortured artist mythos. This is made plain on the album, especially the completely unhinged “Full Blown Meltdown”, where he sings: “I’ll be sure to write it down when I hit rock bottom/ For all the people who love to fetishize problems/ And to tell the truth, I fetishize them, too/ It’s pretty messed up, isn’t it?” This self-critique is on display all throughout the album, with the self-deprecating chorus of “Free at Last”, where Babcock yells: “Just coz you’re sad again, it doesn’t make you special at all,” and again on lead single “Kids”, where he takes the point of view of someone chastising him: “Your little songs are getting way too literal/ How about some goddamn subtlety for a change?” The reflective nature could get overly precious if not for Babcock’s conviction, working out every insecurity in his head as the guitars wail around him.


PUP have never sounded as focused or in step, with the songs heavier and more explosive, even as the shout-along gang vocal choruses are the catchiest they’ve written. The band never lets up but also makes time for experimentation, like the metal riffs of “Free at Last” and the folk-rock epic of “Scorpion Hill”. The latter also marks a high point in Babcock’s writing, an anthem with Springsteen ambitions that portrays a snapshot of a life filled with layoffs, night shifts, crippling debt, and worrying about a family you can’t support. Shouting/talking his way through the song like Craig Finn backed by Does This Look Infected?-era Sum 41, Babcock weaves a modern American tale of failed dreams, economic crises, and lost hopes.

The Bad: Morbid Stuff slams on the pedal from the opening minute and never really lets off until the quiet restraint of album closer “City”, which appears more as a coda to the 10 songs of chaos that came before. As Babcock sings about being dragged into an inescapable pit, it makes for a darker, poignant note to end on. The way the song is mixed quietly and paced slowly, however, makes for an abrupt change of pace that saps the earlier momentum. Together with “Bloody Mary Kate & Ashley”, with its frivolous tone and story about the children’s folk tale, the songs make for rare moments that don’t quite fit with the rest of the album.

The Verdict: Morbid Stuff is a bold step forward for PUP, an incredibly mature record given how filled with anger and contempt it is, containing true moments of insight. Even the more straightforward bitter break-up songs like “See You at Your Funeral” and “Closure” have a self-awareness to them to offset the vitriol. PUP have written a remarkably prescient album about modern life filled with rising income inequality and crumbling infrastructure, singing about the decay of unchecked development on “Sibling Rivalry” and being “on the verge of poverty” on “Full Blown Meltdown”. By the time they get to “Bare Hands”, the triumphant riffs offset the desperation of the lyrics, with Babcock exhausted, barely holding on. The album is certainly bleak, and at times the despair can feel soul-crushing, but the rousing sing-along group vocals make it known that the songs are meant to inspire community, to connect with people feeling hopeless and bring them together. Morbid Stuff stands out not just as PUP’s best album, but as a landmark release for the genre, tapping into a generational anxiety as one of the best punk albums of the year.

Previous Story
Posthumous new Avicii album, TIM, to be released in June
Next Story
Pet Sematary director on all the cats playing Church: “They were like this pack of divas on set”
Popular
More Stories
[fu-upload-form form_layout="media" title="Submit Your Photo"][input type="hidden" name="ugc" value="1"][/fu-upload-form]