The Chemical Brothers Dance Towards the Apocalypse on No Geography 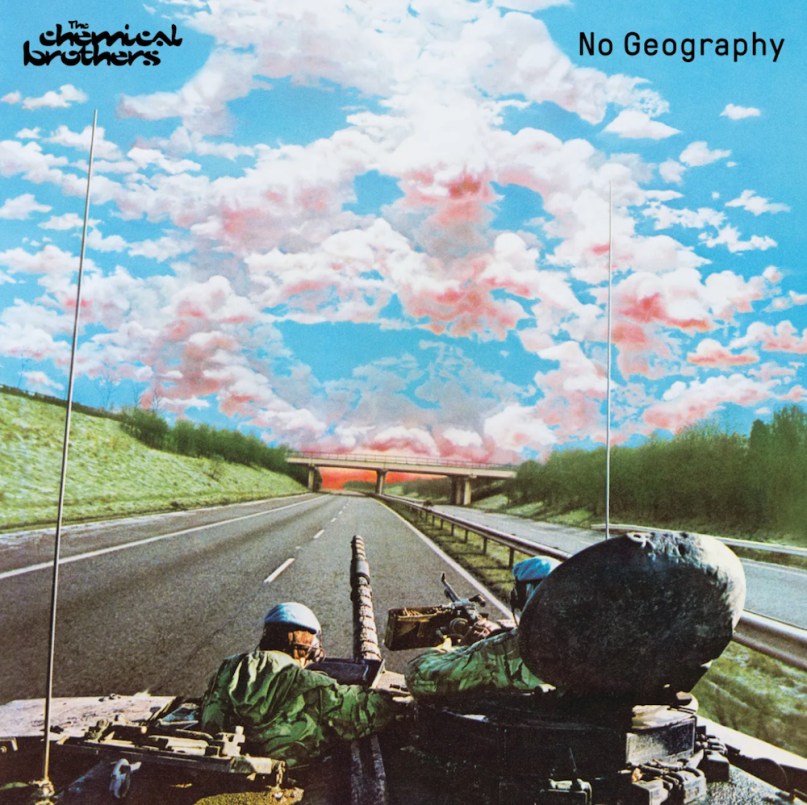 The Lowdown: In the 1990s, well before the EDM tidal wave crashed onto American shores, rave music had infiltrated European soil and was on its way to becoming a major cultural phenomenon. In the US, electronic music was generally confined to its own insular subcultures — Chicago house and Detroit techno — but across the pond a different tea was a brewing: Big Beat. Inspired by British post-punk and nascent electro pioneers like Kraftwerk, Tom Rowlands and Ed Simons (The Chemical Brothers) would soon become one of the biggest purveyors of the British Big Beat genre, along with artists like Fatboy Slim, The Prodigy, and Basement Jaxx.

Now, nearly a quarter century since the Chems debuted with the excellent Exit Planet Dust, the electronic music landscape is almost entirely unrecognizable in comparison; artists have come and gone, fads have become popularized and repeated ad nauseam, and the masses have slowly started to become more attuned to the various subsects that electronic music encompasses. Which leaves us at The Chemical Brothers, whose ninth studio album is a testament to their timeless impact on the electronic music stratosphere and reminds us just how inventive rave music can be when it’s not self-consciously latched onto whatever the electronic zeitgeist is at the time. No Geography is mercurial, dangerously sprawling, and some of the most thrilling rave music to be released in years.

The Good: No Geography is a sonic fucking apocalypse. While the album’s first track, “Eve of Destruction”, might not be a direct nod to the Trump/Brexit doomsday era, I can’t help but find its driving beat to be so immediate, so drastic in texture, that it does in fact feel like the nuclear end-of-the-world dancefloor tune we’ve been waiting for. This infectious, danceable terror is carried into “Bango”, where Aurora Aksnes’ demonic vocals pair with evil synths that twist and spiral out of control into a state of existential panic. The lush, washed synths on the album’s title track burst through its manic foundation like an otherworldly creature, almost alien, transforming the album’s sonics into an ethereal wave. It’s as if we’ve been plucked from a burning hell-world by an all-knowing God and now we observe its flames from the heavens. The album closes with “Mad as Hell”, the project’s standout club-floor hit. It’s punishing and disorienting, with driving drums that carry psychotic acid synths at rapid pace toward the album’s grand finale. Finally, we’re permitted to regain stability on “Catch Me I’m Falling”, which pierces with its sharp, emotive synths that carry with them a tinge of melancholy.

The Bad: No Geography spirals out of control near its midpoint, losing touch with its thematic focus almost entirely. While “Got to Keep On” and “Gravity Drops” both hold up as individual tracks, they do little to drive the album forward and squander quite a bit of its energy at the album’s most crucial point. The Chemical Brothers are understandably more intent on creating singular tracks, each with their own unique sonic life, than they are crafting an album with a distinct thematic focus. Nevertheless, the album has moments where such tracks rub against each other in a jarring manner, leaving a rather sour taste.

The Verdict: If it weren’t for The Chemical Brothers, rave music as we know it wouldn’t exist. The electronica pioneers have, once again, proven they can make some of the most compelling electronic music the genre can offer. No Geography is sprawling, terror inducing, and absolutely primed for the dancefloor, which makes The Chemical Brothers’ recent festival headlines and show announcements that much more interesting. With 10 new tracks in their arsenal, it will be satisfying to see how these new end-of-the-world concoctions play out in real time. Looking down above it all, the chaos is rather glorious, but lest we forget its disastrous implications on the surface.

Essential Tracks: “Mad as Hell”, “Eve of Destruction”, and “No Geography”