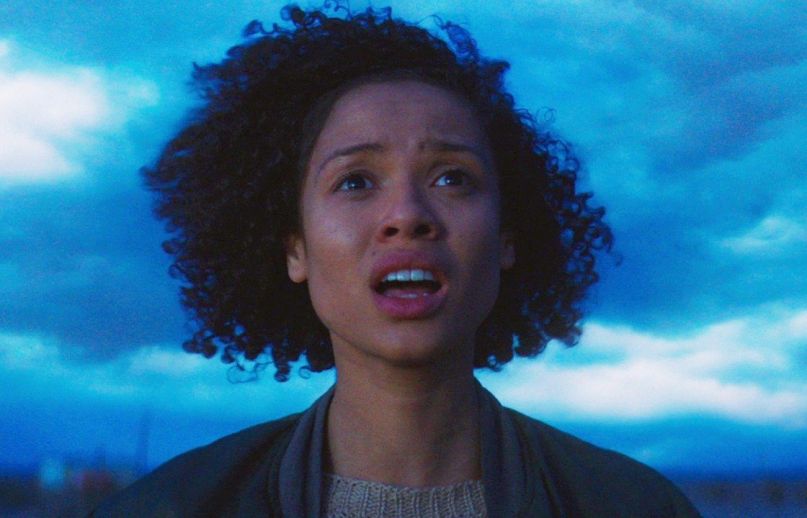 The following review was originally published as part of our coverage of the 2018 Chicago Critics Film Festival.

One of the more common gripes with superhero movies, and really any stories of “exceptional beings” at large, is the lack of the human element. In some cases, it’s a suspect question; what humanity is there in, say, a sentient space tree? Yet it’s that humanity that allows us to connect to these films, and it’s so often absent from our biggest-budget spectacles, which is why Julia Hart‘s minimalist origin story Fast Color winds up being all the more arresting. It’s the hero’s journey in their nascent phase, conveyed via small character moments instead of grand flourishes of CG spectacle. That’s not to say that there aren’t a handful of stunning visuals offered by the film before its end, only that the film draws attention to how much more those matter when there’s something relatably, vulnerably human spurring them on.

When Fast Color  picks up with Ruth (Gugu Mbatha-Raw), she’s been running for an evidently long time. She knows how to survive, she knows how to keep her head low. Most important of all is Ruth’s capacity for staying invisible. So when Bill (Christopher Denham) sits next to her in a New Mexico diner, and seems to understand more about Ruth than he should, it’s the sort of event that raises several immediate red flags. Soon Ruth is back on the lam, with Bill and the local sheriff Ellis (David Straithairn) in hot pursuit, and she finds herself in need of a place to lay low, until it’s safe for her to continue on the road again. Unfortunately for Ruth, there’s no safer haven for miles than the place she left behind for years: her home, and her mother and daughter within it.

Ruth’s reasons for leaving are just one of the ways in which Fast Color wrestles with its setup of a terse, long-overdue homecoming. It’s not that Ruth was entirely wrong to indulge her flight responses; particularly when Hart gets around to illustrating just what Ruth can do, it’s clear that she was at best a hazard to the people she loved the most. But it’s not the only reason, and Ruth is hardly a saint. As Hart and co-writer Jordan Horowitz observe early on, through Ruth, “we’re just trying to get by.” There’s more to Ruth than the film initially lets on, even as it insinuates the same from its opening moments. But Fast Color isn’t so concerned with the mystery of Ruth’s abilities, and how they may have manifested elsewhere, as it is with who Ruth is, and who her loved ones are, and how the sins of one generation are passed down to the next in expected and surprising ways alike.

Fast Color is the sort of film which utilizes its minimal settings and performers in increasingly profound ways. As Ruth’s mother Bo, Lorraine Toussaint marries her knack for imposing motherly instinct with a distinctly raw guilt. Bo has a lot of valid reasons to be initially coarse in her interactions with Ruth, but the greatest one is that she knows how her own mistakes led to the absence that’s dictated so her much life. Mbatha-Raw, meanwhile, matches Toussaint’s severity with her own tenacious anxieties. Where Bo is resigned, Ruth runs endlessly in hopes of finding a place which she may one day be able to call home, in the truest sense of that word. Fast Color often engages with which places we call home, and the people we need around to call a place a home, and much of that emerges from the subtler moments between Mbatha-Raw, Toussaint, and Saniyya Sidney as Lila, Ruth’s estranged daughter.

Lila is no more a precocious child than Ruth is an anti-heroine or Bo an all-knowing matriarch, and even when Hart teases out the stakes through a small handful of gorgeous visual flourishes, Fast Color remains firmly anchored in the sometimes brutal schisms within any estranged family. The idea of Ruth’s environment, and the extent to which she’s a product of it, is called into question frequently throughout, particularly when she and Lila attempt to make up for lost time in their own halted way. These aren’t people who deceive each other, but they’re certainly people who think they know what’s best for themselves and one another even when it’s repeatedly proven that they don’t. Hart matches these moments with occasional, inspired moments of visual catharsis, and Fast Color gradually emerges as a special kind of sci-fi, the kind with a keen eye for the things that matter most to the genre.

It’s also a consistently riveting film, whether it’s gazing over three generations of women eating breakfast together or following Ruth from one seedy hovel to the next. Hart and Horowitz pitch the action at the pace of a chase saga, whether that action is overt or more muted, and it allows Fast Color the perfect sort of on-the-fly storytelling for a chase saga. It’s intelligent, frequently resonant, and even wryly funny at points in its own weary way. This is sci-fi which trusts its audience to fill in the blanks and do just a little bit of the heavy lifting, and it’s better off for it.

Where’s It Playing: Limited release, starting April 19th. Find out if it’s playing near you.