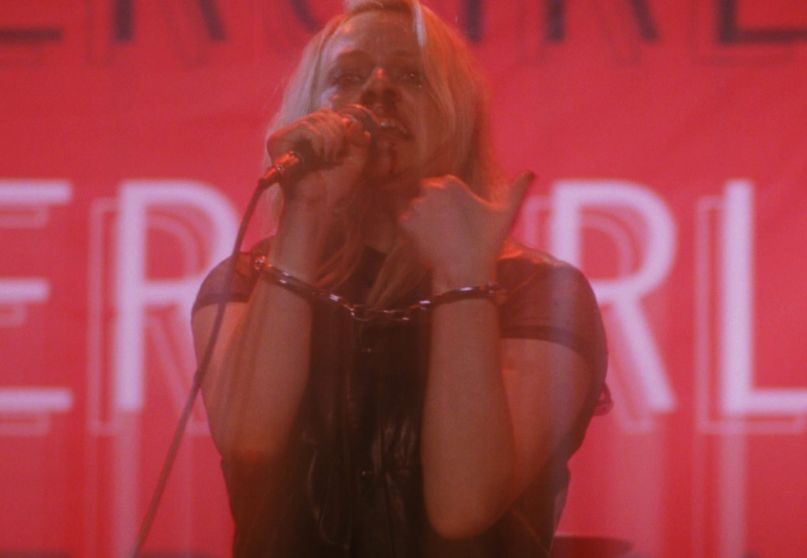 The following review was originally published as part of our coverage of the 2019 South By Southwest film festival.

The Pitch: The riot grrrl answer to soulless assembly-line music biopics like Bohemian Rhapsody, Her Smell charts the descent — and potential rebirth — of Becky Something (Elizabeth Moss), the frontwoman of an all-female grunge band in the vein of Bikini Kill, Bratmobile, and L7. As the ’90s come to a close, Becky’s drug abuse and unspooling mental health alienate people in all corners of her life, from her bandmates (Agyness Deyn and Gayle Rankin) to her label owner (Eric Stoltz), mother (Virginia Madsen), husband (Dan Stevens), would-be proteges (Ashley Benson, Cara Delevingne, and Dylan Gelula), and a friend whose star has risen higher than her own (Amber Heard).

“The Drama You’ve Been Craving”: If the above description sounds like standard biopic fare, rest assured that writer/director Alex Ross Perry has bred a new kind of musical animal, mostly thanks to his script’s unconventional framing. He structures his third collaboration with Moss more like a play than a typical film, with five different acts each depicting an important touchstone in Becky’s breakdown and attempts at rehabilitation. While backstage at the titular club, music bleeds through the graffiti-scrawled walls, casting everything in a disorienting soundscape that mirrors her mental state and slowly melting relationships.

In the first act alone, Becky receives visits from half of the primary cast, in addition to a phony shaman who only further worsens her health. Between her infant daughter crying, the drugs, the infighting, the vomiting, and the ritualistic chanting, the extended opening sequence seemingly leaves nowhere to go but up. That notion is then shattered as we move to even lower points at a recording studio and the band’s final implosion. Perry’s go-to cinematographer Sean Price Williams gives each of these sections its own frenetic style, swooping from handheld cameras to elaborate tracking shots to give the sense that Becky’s spiral is completely out of anyone’s control — even her own. The audiovisual chaos becomes all the more effective and rewarding when Williams finally steadies himself while shooting Becky at her Pacific Northwestern home, the stillness giving the audience hope that maybe she has a fighting chance of getting better.

“It’s Not You”: In the grand tradition of Velvet Goldmine, I’m Not There, and the latest iteration of A Star Is Born, Her Smell proves that using an already-existing musical act as a springboard often feels more authentic than a film about real-life musicians. Because there’s no expectation to faithfully retell an actual living or dead person’s story, Perry is free to draw from the rock ‘n’ roll tropes that are most narratively satisfying within his highly pressurized framework. He even gets to make up a few of his own.

It also helps that Moss fills Becky with enough wild energy, charisma, and pain to keep her from ever becoming a cliche. To say it’s all in the eyes feels like the understatement of the year, as she throws her entire being into the role. But there’s something about her gaze that’s both frightened and predatory, her heart beating through her pupils to let the supporting cast know that she could either die or destroy everything in the room at any given moment.

“Bitch Theme”: The biggest challenge with fictional bands is pairing them with songs good enough to convince viewers that the music could find an audience. Perry was smart to enlist Alicia Bognanno of Bully to give Becky’s group, Something She, their voice. The four original songs snarl, kick, and shiver, even when we only hear them as raw snippets at home or in the studio. Moss also makes a handful of unexpected other artists’ songs her own, including Bryan Adams’ “Heaven,” which in the film’s most delicate moment becomes an impromptu lullaby for her daughter.

The Verdict: Her Smell marks the first time that a riot grrrl band — real or not — has been at the center of a narrative feature, and in a more sanitized, cut-and-dry format, it could read like any mediocre rock biopic. But Perry’s kinetic style and Moss’ explosive performance transform it into something that feels more authentic than actual history.