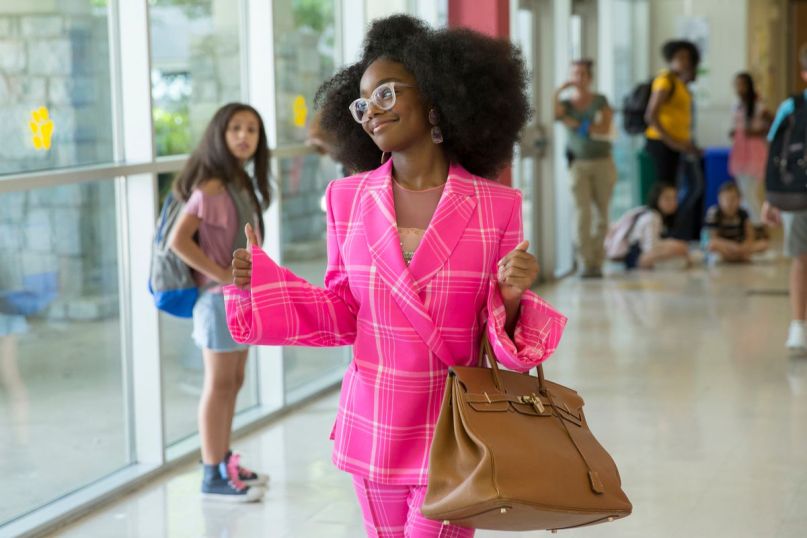 The Pitch: Jordan Sanders (Regina Hall) is a self-made tech mogul and also a self-made boss from hell, with nobody getting it worse than her poor assistant April (Issa Rae). But when Jordan messes with the wrong magic-loving little girl, she finds herself back in her 13-year-old body (Black-ish’s Marsai Martin). April quickly discovers what’s happened, and although she revels in Jordan’s predicament, she also pledges to help her out — especially considering that Jordan’s app development company has a major pitch due to their biggest client, an insufferable millionaire man-baby (Mikey Day).

A quick call to child services from a pissed-off neighbor results in Jordan having to enroll in middle school, while April tries to keep things at the company from spinning out of control. At school, Jordan quickly finds herself consigned to the nerd table, where she tries to mete out some hard-won life lessons. Meanwhile, April discovers that she’s a pretty good boss, mainly because she isn’t completely awful to her co-workers, unlike Jordan. (A few free carbs go a long way!) As she and April grow closer, Jordan starts to wonder if maybe, just maybe, the persona she’s employed all this time is actually … bad?

A Little Confused: While Little reunites Hall with Girls Trip co-writer Tracy Oliver (who penned this script with director Tina Gordon), it’s Martin who conceived of the film in the first place. She’s the reason Black-ish creator Kenya Barris is a producer on the film. And it’s the tension between those two sensibilities — the raunch of Girls Trip and the more family-friendly vibes of Barris and Martin’s previous work — that leaves Little stuck in the middle. You can almost hear the gaps in the PG-13 script where the dirtier jokes or swearier words are held back for weaker tea.

It’s no accident that the film’s best moments are also its most scandalous. Martin aggressively flirting with her hot teacher (Justin Hartley) or with Jordan’s incredibly sweet booty call (Luke James) is uncomfortable, but it’s also funny, partly due to Martin’s cocked-eyebrow swagger, and mostly to the horrified reactions she provokes. While a fair amount of the jokes fall flat, the few that center around adults deciding to “whoop” Martin’s bellicose tyke produce some of the film’s biggest laughs. Then again, building an entire movie around those gags — at least a movie that would also do big business with audiences — might well be impossible. And that’s exactly the kind of corner that Little paints itself into.

Middle School Muddle: This identity crisis is felt in the film’s plotting as well, as Little whips between plotlines set at the middle school, at Jordan’s company, and around her lavish apartment. (Its chic-and-sleek decor is a Hollywood tip-off that whoever lives there has a lack of love in their life.) And just as Jordan can never commit to being in a real relationship with another person — romantic or otherwise — Little never commits to what kind of movie it’s going to be.

Despite a distressing general lack of Issa Rae — who walks away with the film  — the school scenes hold the most promise. After all, what adult doesn’t wake up sweating bullets at the thought of having to go back to middle school? The film even opens with a kind of reverse “Yup, that’s me” gimmick that sees the actual 13-year-old Jordan humiliated in front of the entire school, a moment that sets her on her present-day course, lighting a fire in her belly as it hardens her heart.

But Little’s failure to commit means that the middle school plot is still underserved. Even the reasons that these scenes work so well have more to do with Jordan’s nerdy compatriots — played by Thalia Tran, JD McCrary, and Tucker Meek — than with the rest of the film, or even Martin herself. She’s a great, assured performer, and the film is hers to carry, but she’s left with about as much clunky material as her adult costars. The rest of the kids, however, absolutely crush their much smaller, character-centric turns.

Issa Rae of Light: This will come as no surprise whatsoever to fans of her HBO show Insecure, but Rae is just wonderful here. Even in a formulaic studio comedy like this one, her sheer star power lights up the screen. (Has Congress looked into using her smile as a form of clean renewable energy? Because they should.) Whether she’s cowering from Hall, alternatively chilling or bickering with Martin, or flirting with her cute co-worker (Tone Bell), Rae simply exudes charm.

She can’t entirely rescue her scenes — many of which are ploddingly paced in that Apatowian “funny people muttering under their breath” kind of way — but she keeps them above water. She manages to elevate one particular moment, an impromptu public sing-off between her and Martin, despite the fact that it comes out of nowhere, buried by some rushed editing. The best way to spot a true movie star is when they’re great even in subpar material. With Little, Rae aces that test.

The Verdict: According to Martin, the reason she wanted to make Little was that she so rarely saw people like herself on the screen. By that measure, the movie is a success. Fingers crossed for many more films like it in the coming years. And hopefully those movies will have an easier time being just one thing at a time, instead of trying to do everything at once and missing the mark in the way Little ultimately does. The more films like Little that show up on the big screen, the likelier that is to happen.