Film Review: Peterloo Takes a Relentless Look at the Massacre of 1819 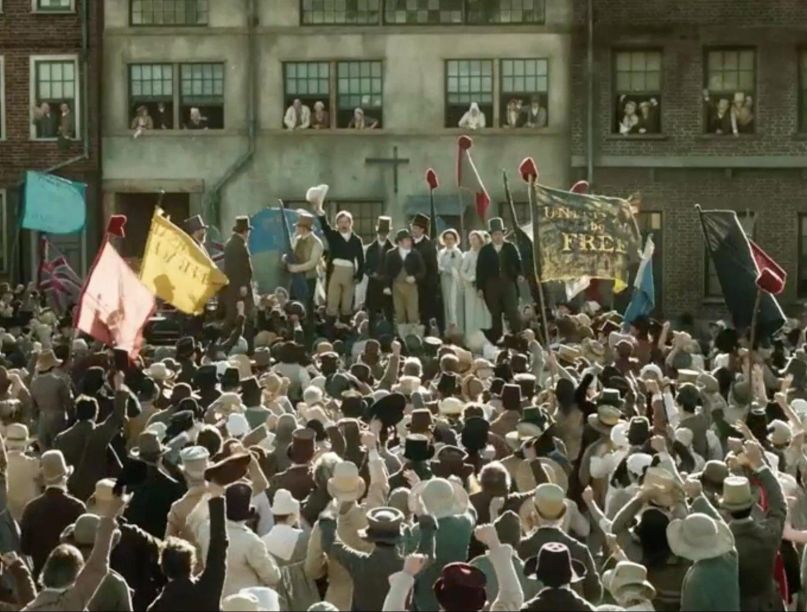 The Pitch: A dramatic retelling of the Peterloo Massacre, Mike Leigh’s Peterloo tracks the years, people, and socioeconomic conditions that lead to the tragic events of August 16, 1819 in Manchester. Laborers, the self-described “Reformers” of England, were simply trying to organize, peacefully, in a show of non-violent resistance. Women like Nellie (Maxine Peake), a working mother, were eager to show their support. Civil rights orator Henry Hunt (Rory Kinnear) felt an obligation to speak for the proletariat. Samuel Bamford (Neil Bell), a low-level poet and passionate activist, wanted a chance to be heard at the forums. All deserved a chance to protest and critique judges, reverends, and factory owners. The ruling class. And then the cavalry came.

This is a film evoking an era of war and pestilence. An era of work, honest and dishonest. And most importantly, this is classicism in its rawest and most heated form. Peterloo is traditional, dryly historical, and all sorts of other Merchant-Ivory slang for “stuffy and challenging”.

Peterloo. Couldn’t Escape if You Wanted To: To be candid upfront, Peterloo is a grand, woeful endeavor.

Leigh, the gifted scribe and playwright, takes his time in contextualizing the Peterloo killings. He begins with an end: The end of the Napoleonic wars, and a reminder of the exploitation of farmers and carpenters and other non-educated Englishmen being shipped off to fight the battles of the rich. (You know this tale; it’s the subject of so many Creedence songs.) We see the effects in young Joseph (David Moorst), Nellie’s son, a curly-haired kid suffering from PTSD. He never gets the support a veteran deserves. And had he died, his family would likely not have been made whole, monetarily or emotionally. He’s just another spoke in the wheel of greater powers setting up unfair fights. And he’s but one of Manchester’s many poor and tired being constantly set up to fail; Cart fixers, market hawkers, local press printers, all victimized by lacking opportunities and cost-cutting measures across the board. Joseph’s family is out trying to make an honest shilling, like so many others in Manchester.

Of course, the higher-ups hate them all. They’re agitators in the eyes of those same local judges and reverends, bewigged blowhards who see people like Joseph and his family as leftist radicals. The rich hold their education over the masses. They put down defendants and families for not speaking as fine an English language as them. They make the rules. They keep the downtrodden in their assigned place.

But Peterloo shows the discipline, manners, and thoughtfulness that Manchester’s many united put into their revolt, and Leigh has an adept ear for sympathy through characterization. The director’s gift for the cadence of humanity is as evident as it’s always been. Like Secrets and Lies, or even Happy-Go-Lucky, he minds his time with the little details. His form, featuring photography from famed DP Dick Pope, is superb. Peterloo’s ability to bathe in the mechanical process of a cotton mill, or the lack of lightbulbs in a dark environment, shimmers handsomely. And Leigh clearly sides with the reform movement. They just want some time, some money, a crumb of respect from their employers and those in power. The elder statesmen, with their invocations of the Lord and self-aggrandizing bluster, are so villainous it’s beyond acknowledgment. Deputy Chief Constable Nadin (Victor Maguire). Lord Sidmouth (Karl Johnson). They even sound treacherous. Leigh would rather pass his time with people like Nellie or Joseph, or their family members Mary and Joshua and Esther.

Leigh is here to make a case for the people of the land, for their rights and lives as precious. And Peterloo is more than just a brutal reminiscence; with an ever-vanishing middle class around the world, the fears of the working people remain omnipresent 200 years later.

Disastrous-Leigh: It’s then a shame that the structure undermines a lot of that goodwill.

History is rich and meaningful when it’s well-told, and Peterloo is beyond comprehensive, but Peterloo’s outline rings callow. This is important. The attention to detail, the time spent within this world, makes it a film you can study. You learn of the people, you grow to like them. Take sides, even. But the actual event — however abruptly factual it may be — does not end the film so much as halt it, and Leigh’s comments on it articulate too little beyond the frank and obvious. The ostensible goal is Dickensian, to rip the heart as a call for action and education. But that creeping dread, punctuated by a glib post-mortem, reads as incomplete.

Imagine Mike Leigh sitting behind the camera for a $200 million epic like Titanic, or a colossal end-of-days flick like 2012. The sense of dread and characterization would be remarkable, if Peterloo offers any evidence. But its script structure rankles as it proceeds. Peterloo takes 150 minutes of the 154-minute runtime investing itself in the humanity these people, building them up, only to burn them to ash in seconds. A baby trampled. Countless innocents stabbed. Cries, and then screams, and then dust. To what end? A reminder of avarice and evil’s existence? The harsh realities of the story? We needn’t always be reminded of suffering in such lurid and graphic fashion, let alone after Leigh spends such time marching the film toward his period display of Grand Guignol.

Leigh even follows them onto St. Peter’s Field, allowing the terror of what comes next to build at length. One could call it brute emotional manipulation. Another, a miscalculation of film’s ability to reflect and inform. Get to know these people so you can watch them die. And for what? A brief, half-hearted postscript about letting The People know what happened … at Peterloo? What a sadistic way to get there.

The Verdict: It’s not a tragedy of form in any way, but Peterloo is a miscalculation of narrative and intent.

The cumulative effect and slow build are what makes Peterloo noteworthy. And yet, why does this leave it feeling like an upper-crust disaster film, wherein Leigh lines up his victims in the most detached way possible? The execution is questionable, at best. Yes, Peterloo is Dickensian. It’s also artful, patient, well-staged, and deserving of praise as a period drama. But Peterloo never escapes its own sinking feeling, or the sense that it’s deliberately recounting the horrors of the past for no greater purpose than to remind audiences that they happened.