The full lineup is coming on April 8th 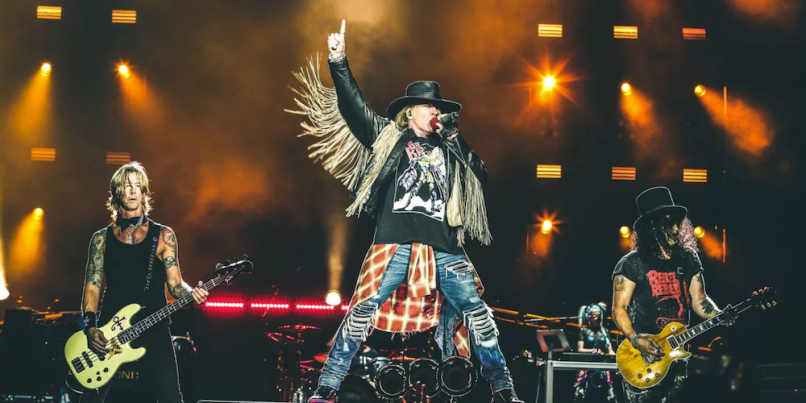 Having seemingly wrapped up their mega-successful “Not in This Lifetime Tour” back in December, it appeared that Guns N’ Roses would be taking the year off from the road. But that is not the case, as the legendary band has just been announced as one of the headliners of the 2019 Louder Than Life festival taking place September 27th-29th in Louisville, Kentucky.

Following the unfortunate cancellation of last year’s Louder Than Life festival after grounds were left deteriorated due to heavy rain in the area, the three-day event will take place at a new location in Louisville — the Highland Festival Grounds at KY Expo Center.

GN’R played their most recent “Not in This Lifetime Tour” gig on December 8th with the band’s first-ever show in Hawaii. The tour raked in $563 million since launching in 2016, making it the second-highest grossing tour of all time, only behind U2’s “360° Tour”. Of course, the GN’R tour was buoyed by the return of classic members Slash and Duff McKagan to the Axl Rose-led lineup.

“There are only a handful of bands through the years whose music not only resonates with fans, but changes the entire face of rock ‘n’ roll. Guns N’ Roses is one of those true icons,” said Louder Than Life festival producer Danny Wimmer in a press release. “Every year we want to come back bigger and better, and we can’t wait to welcome Axl, Slash, Duff and the rest of GN’R to the Louder Than Life stage.”

Today’s announcement of GN’R as one of the headliners will be followed by the full Louder Than Life lineup on Monday, April 8th, the same day tickets go on sale for the event. Ticket prices will be set at different levels, with early buyers getting the discounted rate of $149.50 for a three-day general admission pass or $69.50 for a one-day general admission ticket. More info on the fest can be found here, while tickets will be available here.

Meanwhille, GN’R are apparently working on a new album, with Slash saying, “Basically, the only real answer to give is we’re hoping to put a new record out, and we’ll just see what happens when it happens.” Thus far, the Louder Than Life gig is the band’s only announced show of 2019.

In the meantime, Slash is busy on the road with his band Slash Ft. Myles Kennedy and The Conspirators, while McKagan is releasing a solo album and will embark on a tour in late May.