Inside the Ramones’ Earliest Gigs (or Other Music for Uplifting Gormandizers)

“It was pretty raw. They were stopping and starting and fighting. They could barely play.” 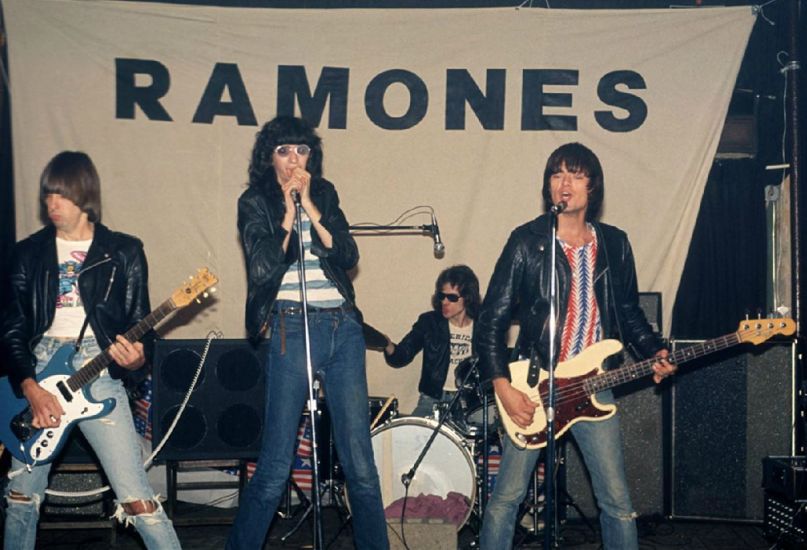 By 1996, the end was near for one of the most consequential bands in the history of popular music.

Ramones, to say the least, were the definition of a hard-luck band. For 22 years, the pioneering punk outfit survived near-constant infighting, drug and alcohol addiction, paltry record sales, and heavy touring, all with few of the tangible rewards heaped upon the legions of bands they helped inspire. But for one summer, their last as a functional band, Joey, Johnny, Dee Dee, C.J., and Marky got the victory lap they were long overdue for.

Lollapalooza not only gave the Ramones a grand stage to play before a new generation of fans brought up on the likes of Green Day and tour co-headliners Rancid, it proved to be a celebration of a band without which Perry Farrell’s roving rock and roll carnival wouldn’t exist. A band that started in 1974 with a group of guys in Forest Hills, Queens, had more or less paved the path for just about everything that happened after it. After years of small returns despite their legendary legacy, Lolla was the Ramones’ payback for years of punk rock trailblazing.

“When The Ramones went on, you looked to the side of the stage and you saw Metallica there,” recalled Monte Melnick, the band’s longtime tour manager who oversaw all but a handful of their 2,263 shows. “They were all there idolizing the Ramones. Those guys have sold billions of albums, but they would come to the guys and say, ‘You guys are the reason we started our band.’

“The Ramones couldn’t really sell anything,” he added. “It was frustrating, but it was nice to hear that.”

For Melnick, who grew up with Tommy (Erdelyi) Ramone in Forest Hills and was witness to the Ramones’ earliest stabs at performing, the Lollapalooza tour crystallized just how far the four-piece had come from its rocky beginnings. Before getting involved with the band, Melnick himself time spent as a bassist touring and opening for the likes of The Beach Boys and Rush among others in the early ’70s. After settling back in New York, he was offered the opportunity to convert a vacant loft space into a recording studio alongside Erdelyi. The two opened Performance Studios on 20th Street near Gramercy Park.

“He had his groups, and I had my groups at the time,” Melnick said.

One of those groups, Melnick recalled, was the earliest version of the Ramones. It was a trio, with Johnny on guitar, Dee Dee on bass and vocals, and Joey on drums. The band’s first performance on March 30, 1974, was a showcase held at Performance, and the results bore what you might expect from a group’s debut. “I didn’t like them at all,” Melnick recalled. “It was pretty raw. They were stopping and starting and fighting. They could barely play.”

Video footage of that legendary first show is hard to unearth, if it exists at all. But other videos taken later in 1974 show a young band still trying to find its footing. At a September 15th show at the legendary Bowery haunt CBGBs, Joey (now the band’s frontman with Tommy on drums) had a stage persona that leaned heavily on glam rock theatrics, his lanky frame hanging languidly while thrusting his fist and leg in the air. Johnny is seen performing with a leather jacket and no shirt. Tommy sits behind the kit in shades and a striped shirt, looking like the spitting-image of Lou Reed.

Musically, songs like “Now I Wanna Sniff Some Glue” were already in the band’s repertoire, but the songs were plagued by erratic tempos, blown notes, and other sorted sonic miscues. Between-song bickering also marred the band’s earliest shows. For a second, Dee Dee and Tommy seem like they’re almost ready to come to blows when they can’t agree on what song to play next.

“Let’s do ‘Loudmouth’,” Tommy says, cutting Joey off as he introduces “I Don’t Wanna Go Down to the Basement”.

“Yeah, well it’s two against one,” Tommy shoots back.

“Really? Really? Fuck all of you,” Dee Dee says before Johnny gets the band back in line. “I Don’t Wanna Go Down to the Basement” it was.

These were not the Ramones destined to shake rock and roll to its core, not yet at least. But the pieces for something great were there. Tommy, who also produced the band’s earliest records and would for a time serve as their manager after leaving the group, had a vision for what the band could be. Meanwhile Johnny, as Melnick recalled, instilled an almost militaristic discipline in the band. When Ramones weren’t playing shows, which they did constantly at Performance, CBGBs, Max’s Kansas City, and the few other venues in the city that would have them at the time, they were rehearsing. The band even had the foresight to tape many of their early shows, which members would watch and study like football players would game film. Beneath the slacker, street-tough exterior lived a band with surprising focus and conviction in its sound.

That work paid off by the time Legs McNeil first caught the Ramones at CBGBs at the end of 1975. Ironically, McNeil had already started Punk Magazine alongside John Holmstrom before he saw the Ramones. “We’d already decided to do the magazine, because we’d been listening to the Dictators’ first album,” said McNeil, co-author of the definitive punk rock tell-all Please Kill Me: The Uncensored Oral History of Punk. “That seemed to sum up who we were. We’d already come up with the word ‘punk’ but we didn’t know that there was this scene happening at CBGBs, you know, until we saw them.”

If Melnick needed some time to warm up to Ramones, for McNeil it was love at first sight. He guesses he was one of approximately 30 people at the venue that night, while the band played for all of 18 minutes, including a rough start that saw the group storm off the stage in anger before it even really started playing. But the raw energy and passion, both in the tensions between band members and the band’s songs, more than made up for the chaos, McNeil recalled.

“They were so pissed at themselves, ya know? You’d never seen that with any band, ever. When they came back, they were scary. It was like the SS had walked out onto the stage. It was like, ‘Who the fuck are these guys?’”

McNeil caught up with the band after the show, which only endeared the band more to him. He and the band bonded over their mutual love of underground ’60s pop, which largely served as the bedrock of the Ramones’ music. His first impression of the Ramones was so strong, in fact, that he was tempted to blow off an interview with Lou Reed, who was in attendance at CBGBs that night, to hang out more with the band. (“Lou was kind of an asshole,” he recalled. “But we got a good interview.”)

“We just immediately fell in love with them, or at least I did,” McNeil said. “It was just instant. There were no long guitar solos or any of that shit.”

The Ramones in short order became one of the most explosive bands in rock and roll, influencing what would become punk rock not only in America but also overseas in England. But they needed some nurturing. In the pre-punk world of 1974 and 1975, the band needed places to play, and they found an ally in Hilly Kristal. CBGBs might have stood for “Country Bluegrass and Blues”, but the venue’s mission was perhaps better defined by the OMFUG lettering underneath, which stood for “Other Music for Uplifting Gormandizers”. Kristal wasn’t one to let his personal musical tastes or biases stand in the way of who played his club. As legend has it, he told the Ramones after their first show at the legendary dive that “people will hate you, but come back tomorrow.”

“You go into the clubs at the time and they wanted Top 40,” Melnick said. “But Hilly was great. He just said, ‘Good, go play what you want.’ All these bands developed down there, and that New York scene just took off. It let people who wanted to come out and hear new stuff hear it.”

Ramones eventually ventured out beyond the boroughs, often to hostile crowds for whom punk was still an alien thing. Melnick would years later chronicle his exploits with the band in his book, On the Road with the Ramones. “People always come up to me and ask, “What’s the Ramones’ legacy?” he said. “ I kind of think of them as the Johnny Appleseed of the music they played. They traveled around early on to all these cities that had never heard this stuff before. Kids would come to the shows and say, “If they can do it, we can do it.”