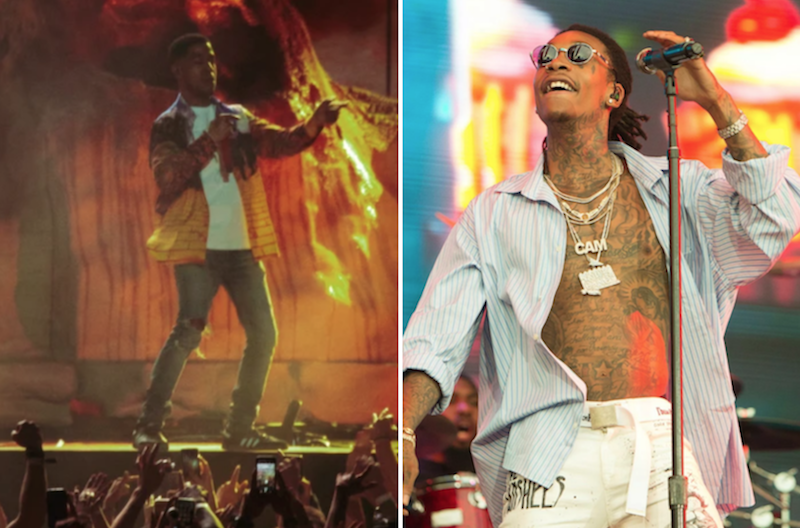 Coachella brought all the biggest names in music to the California dessert this weekend, but many artists took time to pay tribute to those who weren’t able to be there.

As he closed down he festival on Saturday, Kid Cudi paid his respect to the late Nipsey Hussle and Mac Miller. Setting up his 2009 hit “Pursuit of Happiness”, Cudi told the crowd, “This next one, I wanna dedicate this to Mac Miller and Nipsey Hussle. And I want y’all to sing this shit as loud as you can. Promise me. Can I get a yeah?” The audience responded with an enthusiastic affirmation.

He wasn’t the only one to honor Miller (who passed in September) and Nipsey (who was shot and killed on March 31st). At his early evening set on Friday, Jaden Smith was the first to shout out the latter through his autotuned mic. Speaking to the audience, Smith said, “We just lost a legendary person, an amazing man, a legendary MC, so I want to use this time here up on stage on Coachella to just say R.I.P Nipsey Hussle. We love you,” followed by a brief moment of silence.

Then on Saturday, Wiz Khalifa promised that “the Marathon always gonna continue, my brother,” referencing Nipsey’s 2010 mixtape and brand. He told the crowd to make some noise for the late MC before adding, “Now make some noise for a Pittsburg legend that we lost; his name is Mac Miller.”

Find video clips of all the dedications below.

“The Marathon will always continue my brother.. make some noise again for Nipsey Hussle — make some noise for a Pittsburg legend that we lost, his name is Mac Miller”. #Coachella #WizKhalifa #NipseyHussle #MacMiller pic.twitter.com/no7UZD0pqp

Childish Gambino also took a moment to mention Miller and Nipsey during a speech amid his incredible headlining set on Friday. While it wasn’t as direct a dedication as the other performers, it was powerful moment in which he encouraged the audience to “feel something, and pass it on.” Check video of the emotional scene below.