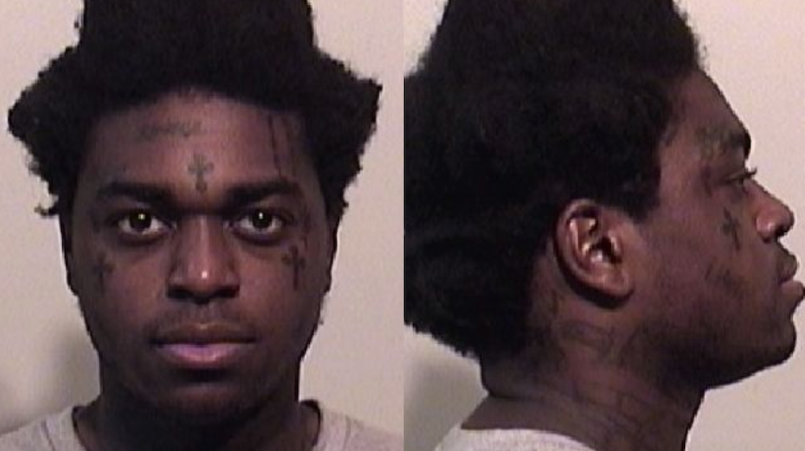 Looks like Trump was actually right about something: There is a crisis at the border. Only it’s not down south, but up by Niagara Falls, where rapper Kodak Black was arrested last night while trying to re-enter the US.

TMZ reports that the “Gnarly” rapper apparently took a trip up to Canada between a Saturday night gig in Detroit and a Wednesday show in Boston. When he and his crew attempted to return via the Lewiston-Queenston International Bridge, they were stopped by border agents. The officers discovered marijuana and a Glock 9mm pistol, none of which had been declared, inside the Cadillac Escalade that Kodak Black was driving. He was arrested on felony criminal possession of a weapon and a misdemeanor marijuana charge

Kodak Black, aka Bill Kapri, was traveling with three members of his entourage, all of whom were in a separate Porsche. 22-year-old Jeantony Saintmelus, who was driving the vehicle, declared he had two loaded handguns, but when cops discovered a third in the trunk — along with more marijuana — he too was arrested. 24-year-old Stetson President and 20-year-old Madarrow Smith were also in the Porsche and booked on the same weapons charges.

According to TMZ, police described one of the guns as an “AK-style handgun with a 30-round magazine. It looks like an AK, but it’s a handgun.” Yikes.

Kodak Black never did make it to that concert in Boston, as he and his crew are currently residing in the Niagara County Jail in lieu of bail. Fans didn’t know this at the time, however, and you can see in the video below how they reacted to the show’s unexplained cancelation. All four men are expected back in court next month.

Update – 3:45 p.m.: Kodak Black has been released after posing bail, and he left the police station by covering his face with dollar bills.

Kodak Black has posted bail after being arrested on gun and drug charges: https://t.co/27JpvJF3a1

This is far from Kodak Black’s first run-in with weapons and drugs charges. Last January, he was arrested on charges of marijuana possession, grand theft of a firearm, child neglect, and two counts of possession of a weapon by a felon plus two counts of probation violation. Amazingly, he was broadcasting to Instagram live when the arrest went down.

In 2015, he was charged with robbery, battery, two counts of false imprisonment of a child under 13, three counts of false imprisonment of an adult, driving with a suspended license, and, of course, marijuana possession. Just a few months later, he picked up more pot and weapons possession charges, plus fleeing from police. Four months after that, there were charges of armed robbery and more false imprisonment. He entered a no contest plea and was sentenced to house arrest, anger management, community service, and five years probation. Then authorities learned of more outstanding warrants for criminal sexual conduct and — wait for it — pot possession, which landed him in jail for a number of months. Just two months after getting out, he violated his probation by ditching house arrest to go to a strip club. He got a year in jail, but was released early and put back under house arrest.

Earlier this month, that criminal sexual conduct warrant led to him being charged with the 2016 rape of a high school student. He’s expected to stand trial in South Carolina later this summer or early in the fall.

Tl;dr: Kodak Black is not a good dude.