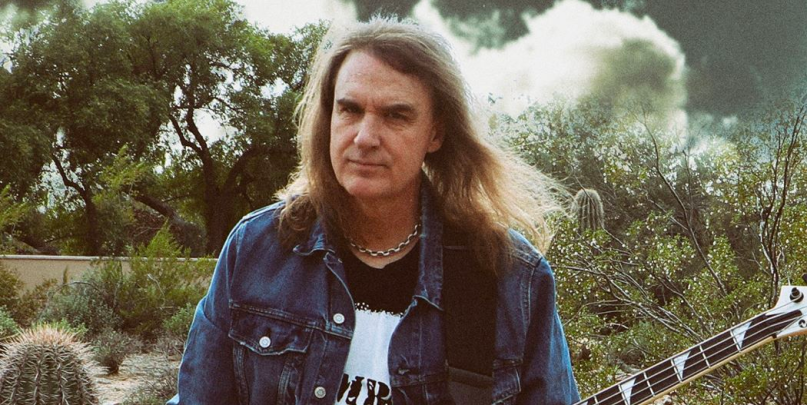 While metalheads the world over wait for news of the forthcoming Megadeth album, that band’s bassist David Ellefson is getting ahead of the game with the announcement that he will be releasing his first solo album.

The new LP, Sleeping Giants (out on July 5th via Combat Records), is being presented as a companion piece to Ellefson’s forthcoming memoir, More Life With Deth, and will feature a wealth of new material as well as unreleased tracks and demos from his various projects including F5, a band featuring former Megadeth drummer Jimmy DeGrasso.

“It truly was just writing and making music from the purest place of writing and making music… like, buddies in the garage jamming on songs,” said Hazaert, who wrote lyrics for the new tracks and contributes vocals on select songs. “And while everyone knows him as a bassist, David is such an incredible guitar player, and songwriter, and I love that we can finally showcase that. And to have a bunch of our friends who are IN the book play on it, and for me and David to collaborate the way we did. I think it’s really special.”

Rounding out the album are eight demos that Ellefson recorded with his band F5 and a pair of tracks he made with David Glen Eisley, the singer best known as a member of Giuffria. The CD version of the album will also include a compilation of tracks from other artists on Combat Records and Ellefson’s own EMP Label Group.

“I love to collaborate and It’s timely and fitting to work up these song ideas with my friends,” Ellefson said of the album, “and get to break out and release some of these great demos and oddities from over the years, the stories behind many of which are told in the book … I think it really brings another dimension to the stories we’re telling in More Life With Deth.”

Pre-orders are already underway, including bundles featuring the vinyl version of the album, a t-shirt and a copy of the book. As for More Life With Deth, that book will be released on its own on July 16th via Jawbone Press.

In addition to working on a new Megadeth album, Ellefson also recently released Get It Out, the debut full-length from his band Altitudes & Attitude with Anthrax bassist Frank Bello. Read our interview with both Ellefson and Bello here.

See the artwork, tracklist and a video teaser for the title track of Sleeping Giants below.