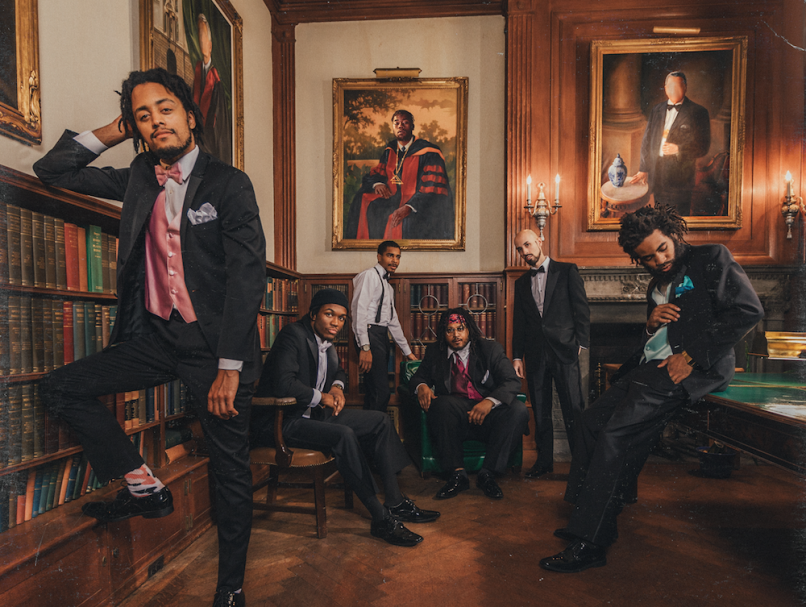 Chicago-based rap collective Pivot Gang have been hinting at a full-length project for the last few months with singles like “Studio Ground Rules” and  “Jason Statham, Pt. 2”. Now, the Saba-led outfit has formally announced its first-ever proper album: You Can’t Sit with Us is due out in just a few weeks on April 19th.

Spanning 13 tracks, the collection sees Saba, brother Joseph Chilliams, and the rest of the Pivot Gang collaborating with the likes of fellow Windy City hip-hop artist Mick Jenkins and St. Louis’ own Smino. Also turning in cameos are Femdot and Jean Deaux.

To coincide with today’s LP news, the Pivot Gang have unboxed their joint song with Smino, “Bad Boys”. As to be expected given the title, the daedaePIVOT-produced cut finds all MCs bringing their tough A-game, letting bars fly like they mean business.

You Can’t Sit with Us follows Pivot Gang’s JIMMY mixtape from 2013. The debut announcement comes on the one-year anniversary of Saba’s Care for Me, which Consequence of Sound named one of the best albums of 2018.

In continued support of that record, Saba is expected to perform at Bonnaroo, Lollapalooza, and Electric Forest, as well as J Cole’s Dreamville Festival. He’ll also join J.I.D on the “Catch Me If You Can Tour”, tickets for which you can buy here.

Previous Story
Tim Burton’s and Joel Schumacher’s Batman movies returning to theaters in May, also with the nipples
Next Story
Beyoncé reportedly walked away from a Reebok deal due to lack of diversity in pitch meeting
Popular
More Stories
[fu-upload-form form_layout="media" title="Submit Your Photo"][input type="hidden" name="ugc" value="1"][/fu-upload-form]