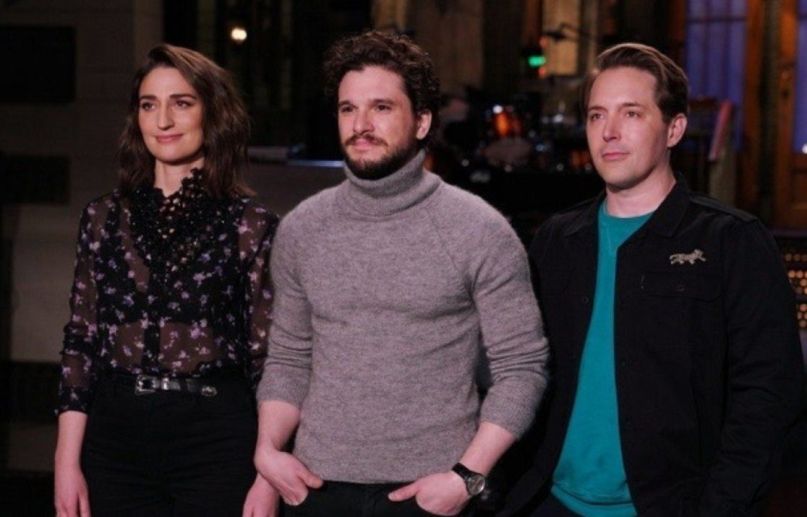 Hey, have you heard that Game of Thrones is coming to its end pretty soon? It’s pretty impossible to avoid the April 14th return (for six long episodes, anyway) of the HBO series that made labyrinthe fantasy storytelling cool by firmly rooting it in heinous body violence and frontal nudity. Everything from beer to Oreos is shilling Thrones these days, so it stands to reason that Saturday Night Live would likewise get in on the fun.

In that spirit, series breakout and general know-nothing Jon Sn … Kit Harington hosted in a decent enough showing, one that kept the overall GoT references to a palatable minimum, with only the opening monologue and a single effective pre-taped sketch about HBO’s desperation to spin the show off into as many things as possible.

Also, the monologue segment was mostly in the trademark SNL business of getting pops for other surprise famous people, but c’mon. Who’s ever going to get upset about seeing Samwell Tarly?

So, Uh, About All That Joe Biden Stuff…

I’ve written about this a lot in my share of this site’s SNL coverage, but ever since everything went tilt and Donald Trump became the goddamn President of the United States, the show has found itself at a strange nexus when it comes to the issue of what to do now. In a time where the sitting President cares about the way SNL discusses him, in public, more than any other President ever has or should, a bunch of talented comedians now have to draft sketches with an awareness that their late-night comedy show has suddenly become a major flashpoint for the hot-button dialogues of the time, perhaps even as much as it’s ever been.

Because of that, when something happens like, for example, multiple women coming forward and saying that former Vice President Joe Biden engaged in the kind of sexual harassment often explained away with a “well, he didn’t cross those lines” response, the show has to 1) comment on it in some way, 2) somehow make comedy out of a possible Presidential nominee being an oblivious weirdo at best and a creep beyond that, 3) do so without hurling people who are not Donald Trump under the bus, and 4) do all of this with audiences still remembering that the show itself helped platform Trump during his candidacy.

It’s thankless stuff, and the fact that the sketch gets the handful of tense laughs it does is a credit to both a returning Jason Sudeikis as Biden, who tweaks the character to remain affably funny while also playing up his aloof but regular boundary violations. (Sudeikis is pretty great at playing up the creep factor underlying charming men; see his performance in the eternally underseen Colossal.) With Kate McKinnon’s increasingly uncomfortable office training instructor as a foil, Biden is played as a man who probably shouldn’t run, but will anyway. “Biden and some woman 2020” is a pretty great comic stinger, but there’s some unnerving truth going on there as well.

Getting Your Kit Off

It’s no secret that the best SNL episodes are the ones where the hosts let loose and go along with whatever the writer’s room dreams up, and Harington proved a game guest in an episode seemingly determined to push him as far out of his comfort zone as possible.

In part because he’s shaved his trademark black beard for the moment, Harington was able to sink into his roles, whether as a burlesque dancer performing for his fiancee’s bachelor party (a sketch that walked a thin line of being grossly mean in its ultimate punchline of “man in lingerie”), or as the awkward protagonist of the Nephew Pageant, the latest example of how this SNL cast is at its best telling highly specific and weird jokes.

Best of all, however, was “Graphics Department”, which dragged Harington into Kyle Mooney and Beck Bennett‘s weird universe. Watching the three awkwardly phrase their conversations like bad RPG quests is skin-crawling enough, and that’s before the turn-based fighting begins.

Weekend Update is Dodging Its Reckoning

Quick sidebar: despite the fact that Weekend Update co-hosts Colin Jost and Michael Che are competing on this year’s WrestleMania card on Sunday night, as part of the annual Andre the Giant Memorial Battle Royale, there was no mention at all of their participation on the go-home show of a New York WrestleMania. Was it the John Oliver thing? Do they fear Braun Strowman? It’s the latter. They know, and we know.

(It’s actually happening in New Jersey. Metlife is on the other side of the river. Stay woke.)

No further commentary needed here. Just watch her live performances of “Fire” and “Saint Honesty” and see for yourself.

And hey, she even got in on a sketch!