The K-pop sensation continued its U.S. rollout on an otherwise flat episode 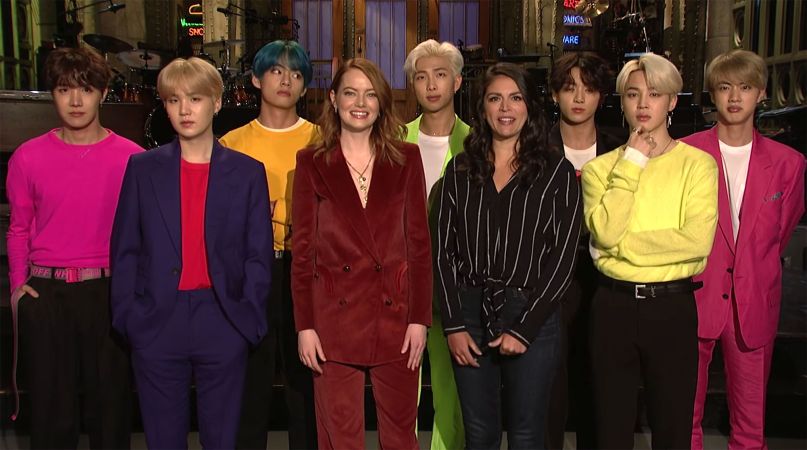 As Saturday Night Live heads into the home stretch of its 44th season, with last night’s episode marking the final new one until May, the sketch show finds itself at the same intersection it does every few years. The 44th cast doesn’t always get adequate credit for how consistently they’re able to wring laughs out of even the stiffest material, but it also still seems to be in search of a consistent comic identity.

While the general de-emphasis on getting recurring characters over has been refreshing throughout this season, SNL hasn’t yet found a new mode to consistently replace that. As a result, you have a show that can range from gut-busting to cringe-inducing at any given time, often running from one end to the other within the same episode. There’s a pattern there, and it’s rooted in relying on the cast to do its best with a surprising frequency of half-formed concepts.

And sometimes, you get an outing like last night’s, which yielded consistent light chuckles, but not a lot of particularly memorable sketches. There really haven’t been that many bad episodes of SNL this year, which is worth keeping in mind, but there still seems to be a bit of a disparity between the level of talent involved and the overall consistency of the episodes.

Emma Stone returned for her fourth outing as host, and as usual, jumped straight into the proceedings with vigor, appearing in every sketch of the night aside from the cold open. On an evening that overall felt more miss than hit, the Oscar winner’s total committment was a welcome presence.

Also, you might have heard about last night’s musical guest. More on that shortly.

Everyone Into the Press Pool

A good example of the show’s premise consistency struggles can be found in this week’s cold open, which did that SNL thing where a bunch of mid-sized stories that might not call for their own individual sketches are dumped into a stew (usually involving an additional guest celebrity), and the jokes are mostly just references to the reasons that those stories are in the news right now.

This week’s felt especially shapeless, with Lori Laughlin and Julian Assange’s arrests being tossed together. Luckily, when they’re being respectively played by Kate McKinnon and a surprise Michael Keaton, the sketch was good for a few laughs anyway. It’s the definition of material being elevated by the performers, with Kyle Mooney, Chris Redd, and Kenan Thompson playing solid straight men for the headlining criminals of the week. And hey, at least it more or less sidestepped politics for a week.

Plus, nobody’s ever going to be upset about Keaton hitting the people with a “let’s get nuts!”

The other most welcome surprise of the episode was the heavy emphasis on the women in the show’s cast. While SNL has demonstrated a concerted effort to diversify both its cast and its subject matter in the last few years, the show still occasionally falls back into old patterns, which is why an episode steadily and knowingly built around trying to work away from that is always going to be heartening to see. (Also, keep doing this?)

A few of the night’s live sketches gave off the impression that they were stretching a thin premise well beyond its viablility, with “Royal Baby Video” and “Dorm Room Posters” both starting with a mildly-funny-at-best setup and running noticeably long. The pre-taped material, as is sometimes the case, fared a lot better, with “Hobby Song” (above) and “Fashion Coward” both hitting some excellent notes.

By far, the highlight was “The Actress”, which saw Stone attempting to get into character for a shoot that really didn’t need it.

And Now, the Portion of the Article About BTS

Let’s be honest for a second. There was a definite A-story surrounding the April 13th episode, and with all due respect to Stone and the cast, it didn’t have much to do with any of them.

Last night saw the SNL debut of Korean boy band phenomenon BTS, and as Stone acknowledged in her opening monologue, the Studio 8H audience was a little more packed with obsessed poptimists and superfans than usual. And as soon as they took the stage, it was clear that SNL has managed to land something on the verge of exploding.

To be clear, exploding in the U.S., because BTS has been gaining momentum at an unprecedented rate for a few years now. Watching them perform as a collective built from immaculately choreographed dancing and meticulously crafted stage presence, it’s impossible not to think of the late-’90s boy band and girl group boom. However, while BTS might have been formed by an entertainment company in the boy band tradition, their reportedly self-composed music puts them in a unique position to do what many of those acts twenty years ago weren’t able to do, or had to change dramatically to pull off. They might be able to keep themselves on top, once they inevitably get there.

Also, if there’s any doubt remaining that hip-hop is pop music now, watch seven young men step their way through “Mic Drop”, which sounds like the glossiest Brockhampton song ever produced.