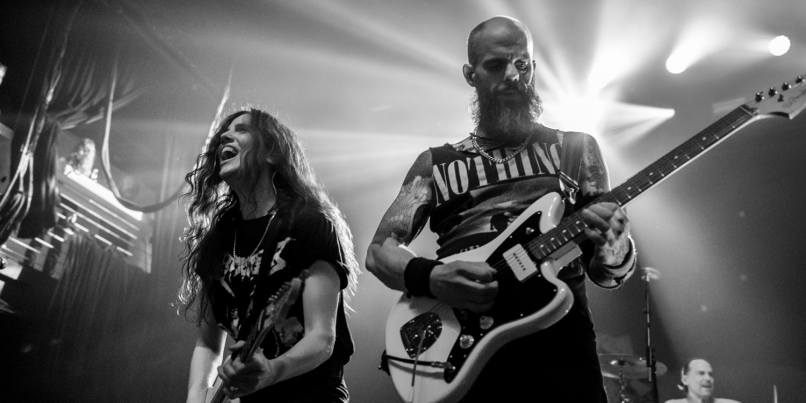 Baroness at Terminal 5 in NYC, photo by Kevin RC Wilson

Sludge metal heavyweights Baroness are set to release their forthcoming album, Gold & Grey, on June 14th, and to celebrate the occasion, the band will play a series of intimate acoustic shows at select independent record stores prior to their previously announced lengthy full-on North American summer tour.

The announcement of the June acoustic jaunt comes via Baroness’ website following a successful co-headlining spring run with Deafheaven. We caught that tour on April 12th at Terminal 5 in New York City, and it was a thrilling experience. The gig showcased new lead guitarist Gina Gleason as the band ran through staples from their back catalog as well as singles from the upcoming album “Seasons” and “Borderline”.


With the more melodic turn the band’s music has taken in recent years and the grandeur of Baroness’ typical stage show, the acoustic tour will offer fans a rare chance to see the songs stripped to their bare essentials. A signing will follow each performance for all ticket holders.

For entry into the shows and the signing, fans must pre-order Gold & Grey LP (which will be a yellow/black marble variant exclusive to the tour) from the specific store where they wish to see the band, excluding the Boston date, where limited tickets are available the day the album is released on June 14th.

In addition to the new album, Baroness will also share new music alongside Sunn O))), Eyehategod, and more, as part of Adult Swim’s Metal Swim 2 compilation, which will stream for free beginning tomorrow (May 3rd).

See the dates for Baroness’ acoustic record-store jaunt and their full North American summer tour below. Get your tickets here.