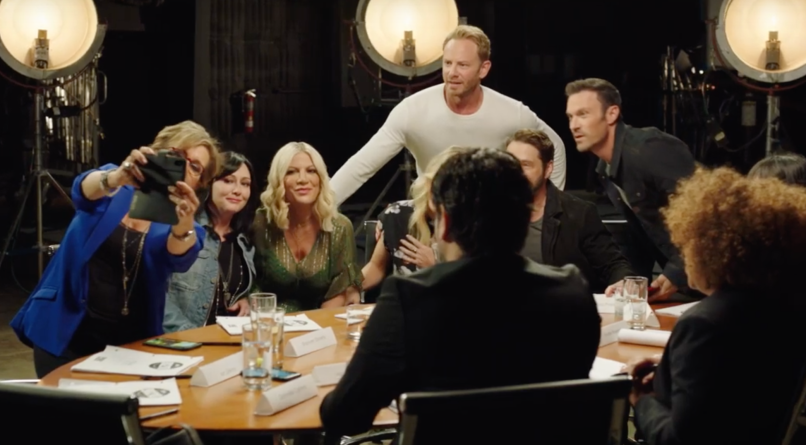 Back in February, we reported that Fox had reunited the original cast of Beverly Hills, 90210 for an ultra-meta revival that would find stars Jason Priestley, Jennie Garth, Ian Ziering, Gabrielle Carteris, Brian Austin Green, and Tori Spelling playing “heightened versions” of themselves. Since then, they’ve added Shannen Doherty.

Now, Entertainment Weekly has a first look at the series, which essentially amounts to a bunch of canned laughter and photogenic shots. (Though, this writer is viciously jealous at those vintage Mattel toys.) What’s more, they’ve also confirmed that the six-episode event begins Wednesday, August 7th on Fox.

“It’s about the characters behind the characters,” Garth told EW, sounding a tad like Charlie Kaufman’s twin in Adaptation. “It’s inside the lives of people that lived in those shoes for those 10 years, and it’s about them coming back together.”

Priestley added that the photoshoot was “really kind of special,” saying: “We all had lot of fun that day, there was a lot of joking around. They had a hard time getting us to actually focus and do anything because we were all messing around so much.”

Of course, the biggest elephant in the room is the absence of Luke Perry, whose own Dylan McKay was a crucial part of the original series run. However, it should be noted that even prior to his untimely passing in March, he wasn’t attached to the cast. One wonders how they’ll address his death on the new series.

We’ll find out come August. Until then, hang out with the gang below.