All hail Burger King, our benevolent ruler who knows what the people want 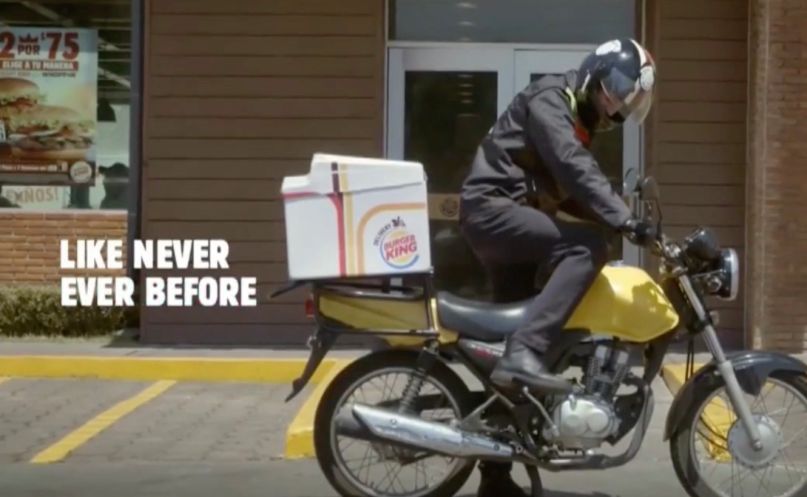 Have you ever been sitting in traffic, angrily listening a Roman Mars podcast, and felt a hunger that can only be quenched by a greasy hamburger? If not, then this is not the article for you. However, for folks who frequently wish to combine a dining experience with stop-and-go traffic, Burger King has earth-shattering news.

Following a trial run in Mexico City, the fast food burger chain has announced that it will begin delivering meals to Los Angeles drivers stuck in traffic, bringing a whole new meaning to the term “fast food.” After receiving an order on the Burger King app, the direct-to-car service will assign motorcyclists to bring hangry drivers their self-proclaimed “Traffic Jam Whoppers.”

The process makes use of Google map technology to pinpoint commuters’ exact location, though the delivery zone is confined to a little under 2 miles from the closest store. In past tests, deliveries were reported to arrive within 15 minutes after ordering, and the menus were limited to Whopper combo meals, featuring their flame-grilled burger, plus fries and a choice of bottled Pepsi or water.

BK has also noted that it is incorporating voice commands for orders, to ensure drivers avoid tickets and remain safe. However, the company have not addressed how safe it is to have hamburger-laden cyclists whizzing in between cars on the freeway to make those deliveries in a tight 15.

Earlier this month, Burger Killer introduced “Real Meals” in reconogition of Mental Health Awareness Month. The campaign aims to spread awareness that it’s “OK to not be OK”, through five different “expressions” on what are essentially adult Happy Meals without toys: “the Pissed Meal, Blue Meal, Salty Meal, YAAAS Meal and DGAF Meal”. That’s right: for just a few dollars, you can purchase a box of food from a restaurant with “pissed meal” embossed on the side.