Starbucks made a cameo on last night’s Game of Thrones and fans are drinking it up: Watch

Daenerys Targaryen: "I will take what is mine with fire and blood ... and no foam" 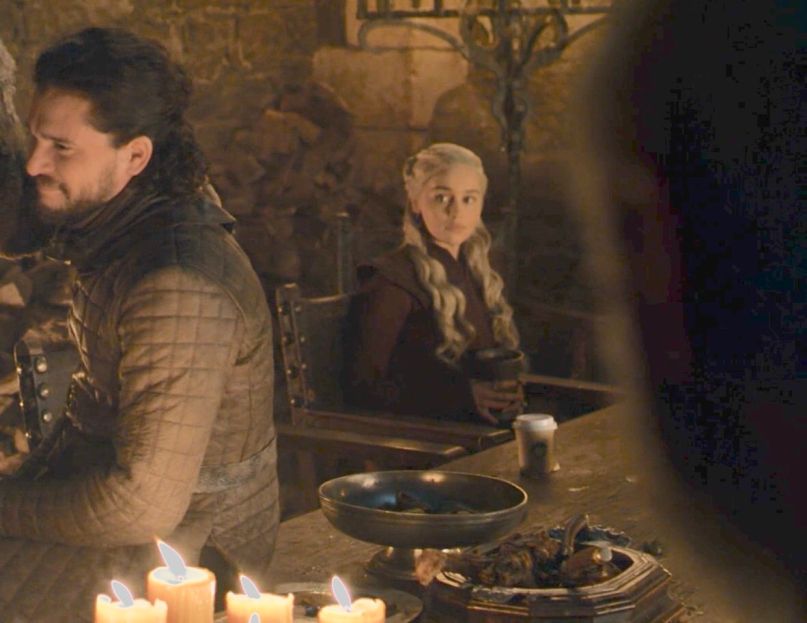 “I will take what is mine with fire and blood … and no sugar.”

Last night’s Game of Thrones pushed fans closer to the climactic battle at King’s Landing. Naturally, there were lengthy discussions, surprising deaths, and, yes, plenty of libations. More than usual, in fact, as fans have since pointed out that Daenerys Targaryen, aka actress Emilia Clarke, appears to be enjoying a drink from Starbucks.

The cameo occurred at the 17:39 mark of the episode, during a scene in which Tormund Giantsbane is toasting Jon Snow during a post-battle celebratory meal. Making the gaffe all that more confounding is the presence of showrunners Gavid Beinoff and D.B. Weiss, who appear in the background of the scene. Update: GOT’s art director says the gaffe is being “blown out of proportion.”

You're telling me they had TWO YEARS to put together a decent show and they couldn't even spot the goddamn Starbucks cup in Winterfell??!?! #GameOfThrones pic.twitter.com/8opg7nyydv

As expected, fans are having a field day online with the revelation, with some hilariously joking that Starbs is canon. If so, there’s certainly a location in Winterfell, though it remains to be seen whether it’s one of those Starbucks Reserve bars. Given the amount of wine in this episode, one could argue that Tormund is a regular patron.

Below we’ve gathered some of our favorite reactions.

my favorite show in the entire world forgot a STARBUCKS COFFEE CUP ON THE TABLE WHILE FILMING pic.twitter.com/60z3pOCfg9

Daenerys Stormborn of House Targaryen, the First of Her Name, Queen of the Andals and the First Men, Protector of the Seven Kingdoms, the Mother of Dragons, the Khaleesi of the Great Grass Sea, the Unburnt, the Breaker of Chains, and Drinker of Pumpkin Spice pic.twitter.com/BOPdolRhXz

GoT cinematographer: i know there are exactly the right amount of starbucks cups in the shot bc i shot it https://t.co/MKW5ifKKtb

you think daenerys is a soy or almond milk kinda girl when she gets her starbucks fix?

Broke: they accidentally left a starbucks cup on the set, oops

Woke: Starbucks is canon in Game of Thrones world

I found where she got the Starbucks cup from #GameofThrones pic.twitter.com/46XztK2QjV

If they bothered using lights they might have seen the Starbucks they left in the shot. https://t.co/5pUqFxzEla