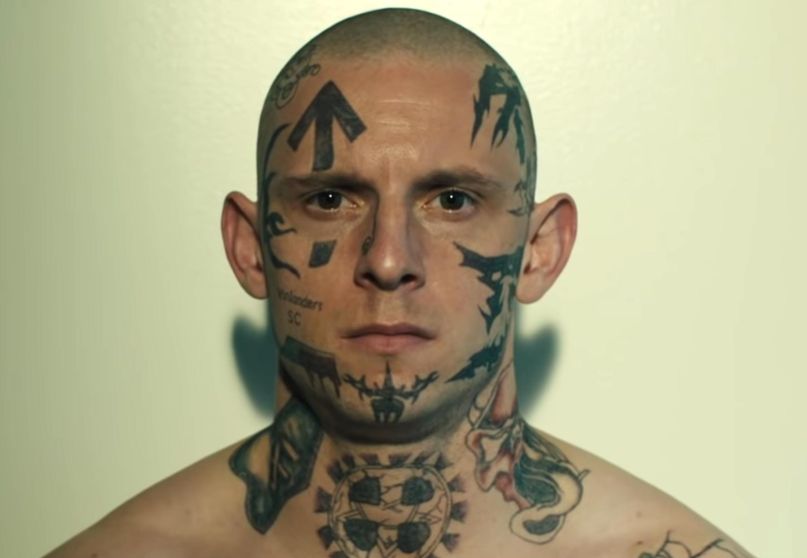 The following review is part of our coverage of the 2019 Chicago Critics Film Festival.

The Pitch: Adapted from true events, Skin is a fictionalized account of the life of Byron Widner. Portrayed by Jamie Bell, Widner was an Ohio–based white nationalist, but there are shades of grey to it beyond that. Yes, Widner most definitely lived the life. But Widner managed to escape it as well, and has since made efforts to atone, helping to bring his former brothers-in-arms to justice. Additionally, he made extreme efforts to taint and mangle his dermis. Widner littered his body in tattoos: An old razor, a disconnected arrow, random black shard-like streaks. Imposing text atop sunken dark eyes, masking a broken spirit.

Skin asks a difficult question, particularly in the current climate: Is there a path to forgiveness, empathy, and atonement for hate-filled young men like Widner, and other white nationalists of his ilk?

Reveal One’s Self:  Bluntly, if you don’t want to explore that question, few could blame you. In these post-Charlottesville times, it’s hard to imagine exactly who was asking for a nuanced, drawn-out work of compassion and lament for the plight of a neo-Nazi.

But still. If you appreciate stories of redemption with strong performances and compelling texture, Skin is commendable. Not highly, granted. It gets in its own way, and raises a few too many questions. Skin works hard at being ethereal and textural, glossing over harder realities like the legacy of white pride in America, and many of the events it details. But it’s a successful provocation told with regret, tension, and a talented cast. One might challenge it as a lecture offering too-easy answers, but as drama, the story works. Should you make it past the unpleasant pitch, there’s an intrigue and humanity to be found within. Skin joins a long line of dangerous youth films, and is stronger (and more internal) than most.

Guy Nattiv adapts the feature-length project from his own Oscar-winning 2018 live-action short film of the same name. While the characters, beats, and formatting are different — the short is about children interacting, where this film is an angry man’s odyssey — the general ideas and explorations remain intact. Skin is obsessed with tattoos and the politics of representation, as well as the toll that fascism can take on the body and mind. Nattiv directs with an even-tempered hand. While unafraid to jump into the ugliness of Widner’s lifestyle of rage, all field marching and fighting and fucking, the director is slower to judge. He’s a fly on Widner’s beer and vomit-soaked wall.

And what we see is Widner growing out of it all. Bell exudes a nervous energy; beneath the black eyes and black tats is a broken man in need of repair, and Bell is more than capable of evoking his journey accordingly. The English actor (and successful escapee from child stardom) is small, wiry, and capable of explosive rage here. When pissed, he’s happy to head-butt and headlock with all the punk energy necessary to survive in his world. But there’s an internal, thoughtful nature that Bell is able to sneak out.

His interactions with ‘Nordic’ matriarch Shareen (Vera Farmiga) and group leader Fred ‘The Hammer’ (Bill Camp) offer master classes in showing and not telling. Bell obeys his foster parents, re-assuring them of his allegiances at every turn, but you can see the fear and fatigue in every nervous hello. A car ride with Fred is filled with platitudes about their cause, but the tension is right below the surface, illustrated through body language and tone of voice.

When Widner falls for Julie (Danielle Macdonald), a young mother with three kids who’s managed to escape the life, an effective romance begins to emerge from the film. It’s not pushy. It’s felt, and convincing. The dialogue is nominal, and often inarticulate (tattoo talk and occasional outbursts are their primary go-tos), but there’s something glowing in their eyes that feels like hope. Bell and MacDonald carry the tenderness, the humanity. You see Bell’s longing for escape, for a new life in the way he looks at and cares for her. And maybe, just maybe, Widner really does see the error of his ways. The sickness stemming from his violent crimes is salved by playing with Julie’s daughters, and bailing on his brethren cold-turkey. Skin’s greatest accomplishment (and surprise) is that it manages to evoke pity for a man like Widner.

Skin in the Game:  Like many good character pieces, Skin has near-flawless performances and allows its audiences into the mind through Bell’s assured angst and ennui. But, that’s the thing. It’s cerebral by nature, not contextual. And somewhat simplistic in its way. Let’s unpack.

There’s something noble in arguing that not every young man wanted into that lifestyle, so much as they were duped with adolescent delights like booze and fistfights and sex. But Skin has plenty of wiggle room to go harder into exploring the cruel and useless contingents of racism in modern America, and sidesteps the opportunity. The movie only passingly brings in the horrors of Widner’s former life, with gun-toting face-offs, a mosque burning, and depictions of recruitment. Those are substantial details in Widner’s life, but they get a swift, ambient treatment. They’re more like fleeting beats than moments to take in, because Nattiv rushes back to Widner to see how he is taking everything in. His experiences are left lacking the proper scale or weight.

Nattiv is deeply and almost entirely focused on Widner’s slow transformation, and that is something to argue over. Is the film glossing over the still-omnipresent atrocities of modern Aryan crime, arguing for Widner as the one good skinhead? It’s a worthy debate that can’t possibly be encapsulated by any one review. It’s a lecture, a forum, a national issue. And in this respect, Skin is not quite present.

The Verdict: What Skin lacks in history, context, or behavioral psychology, it compensates for with pure angst, dread, and guilt. It’s the human element, the bare skin as it were, that makes this film stand out. It’s a melodrama with characters that inspire interest, if not fondness. Skin is about Widner’s growing shame, and the realization that his life’s responsibilities are far greater than garden parties and bonfires. And if it’s surface-level beyond a point, that feels like the design.

Where’s It Playing?:  It premiered at TIFF last September and is working the festival circuit right now. A theatrical release is scheduled for July 26.