Film Review: The Intruder Is a Big Ball of Stupid, and That’s What Makes It Fun 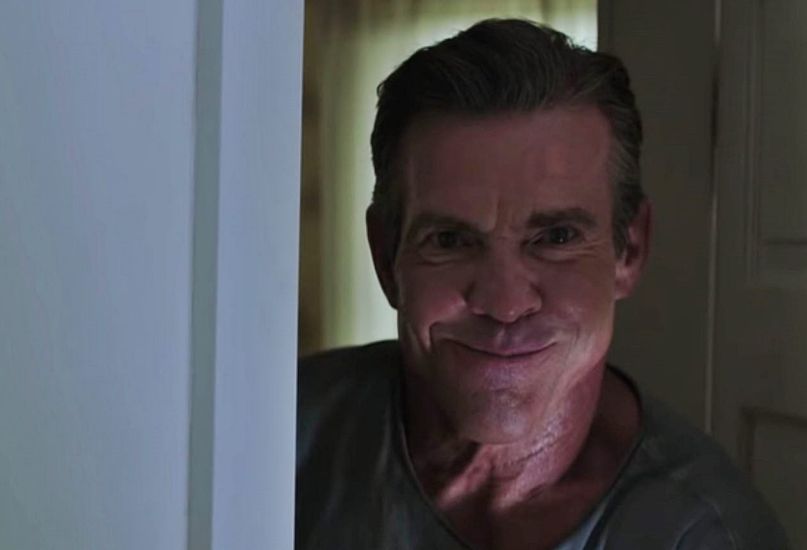 The Pitch: It’s a House Hunters episode gone horribly wrong: young California couple Scott (Michael Ealy) and Annie (Meagan Good) finally find their dream home in Napa Valley, an old house built in the 1900s and owned by a gruff but amiable retiree named Charlie Peck (Dennis Quaid). Sure, he’s a little strange at first — he introduces himself by gunning down a deer at point-blank range, just feet from them — but who doesn’t brush off an encounter like that?

Unfortunately, even after they buy his house, Charlie keeps finding excuses to drop by. He’s mowing the lawn, dropping off wine and pies, even helping to put up the Christmas decorations. Soon, it becomes apparent that even though the house no longer belongs to him, Charlie still thinks of it as his house. And he might just do anything to keep it that way.


Ozzie and Harriet Meet Frankenstein: The Intruder comes courtesy from the screenwriter of Obsessed (David Loughery), which offers an inkling of the kind of tone the film is chasing after. As a movie, its attitude exists somewhere between a Tyler Perry toxic-relationship melodrama and The Boy Next Door — full of cheating husbands, outsized psychoses, and patently ridiculous swings in mood. The whole film is drenched in a one-dimensional R&B soundtrack, complete with the requisite slow jams required for Scott and Annie’s many PG-13 love scenes. Much of The Intruder looks (and feels) like a vintage Toni Braxton video, which is part of its perverse and largely unintentional charm.

Of course, the couple have major problems even before Charlie enters the picture: Scott has a history of infidelity (“I apologized for that!” he whines), and he visibly flirts with every woman he sees — one right in front of his wife. As for Annie, she’s a self-styled “country girl” who essentially pressures her husband into buying an old, decrepit house in Napa Valley that he’s clearly not into (the commute alone!”). The contrivances required to get these two into the house at all beggar belief.

Dennis the Menace: The clearest indicator that The Intruder has its tongue planted firmly in cheek is Dennis Quaid, chewing the scenery so vociferously it’s a wonder there’s a house left to sell. It’s a real treat to see Quaid go wild, calibrating his normal leading-man charm into that of a sneering, two-faced pathological liar who’s a transparent madman to everyone but the characters onscreen (more on that soon). Quaid goes for absolute broke in every single frame he’s given, alternately bugging his eyes out and twisting his patented shit-eating grin into a psychotic sneer when the scene calls for it. Nobody leers like Quaid, director Deon Taylor constantly plopping him in the background of shots so he can stand in plain sight to spook the audience, or drop down from the ceiling in the movie’s climax like a geriatric Predator. Someone cast him as Old Man Joker, post-haste.

(Meagan) Good Grief!: Everyone knows that horror films and thrillers require a certain suspension of disbelief and contrivance to work; if our protagonists call the police, or immediately recognize the threat for what it is, there wouldn’t be a movie, would there? For The Intruder, however, those concepts are stretched to their absolute limits. Charlie’s villainy is so transparent, so manipulative, that it’s a wonder Scott doesn’t call the police on him the moment appears. To reiterate: they first meet Charlie when he guns down an animal, right in front of them. In fact, Scott is suspicious of Charlie from the jump — but instead of calling the police for Charlie’s numerous instances of trespassing, he holds off.

However, it’s Annie who transcends the trappings of the genre to become one of the most clueless thriller protagonists in recent movie history. Amid Charlie’s every violation of boundaries, and every midnight drop-by with a bottle of wine, Annie is written to carry on while completely ignorant of any danger. “I feel bad for him,” she says, reading the sneering creep as an innocent widower and retiree. (“Hey, does that look like blood?” she says innocently to a splatter of red on a door frame in their first inspection of the house.) By the time Charlie makes his move on the once-happy couple, it’s hard not to throw your hands up and think, “Well, what else did they expect?”

The Shade U Give: Adding to The Intruder‘s clunky mixture of tones is the not-so-subtle ways in which it tries to worm in subtext about our current political moment. Charlie’s a scary old white man who loves guns and spends the entire film trying to “take back what’s his” from a successful young couple of color, while wearing a conspicuously on-the-nose red hat. Scott’s hatred of guns isn’t just born of left-leaning pragmatism; his brother was “gunned down in the streets,” implicitly by a police officer. While the basic premise is intriguing enough — what if a home invasion thriller flipped the historically racist script, with a scary white man invading the rightful home of a nice black couple? — these extra nuggets of relevance are laughably clumsy.

The Verdict: In an age where “so bad it’s good” has lost much of its meaning in a sea of calculated camp, The Intruder may be one of the few films of recent vintage that truly qualifies. It’s on a Book of Henry level of jaw-dropping silliness, a sloppy ball of contrivances twisted into something perversely beautiful by Quaid’s knowingly ridiculous performance and Loughery’s bafflingly oblivious characters. See it with a packed audience, if it draws one; its custom blend of bad-movie signposts and giddily stupid plotting goes down smooth with a theater full of people ready to yell at the screen.

Where’s It Playing?: The Intruder stops by with some pie, an ax, and a Cheshire-cat smile, in theaters everywhere May 3rd. Get your tickets now!